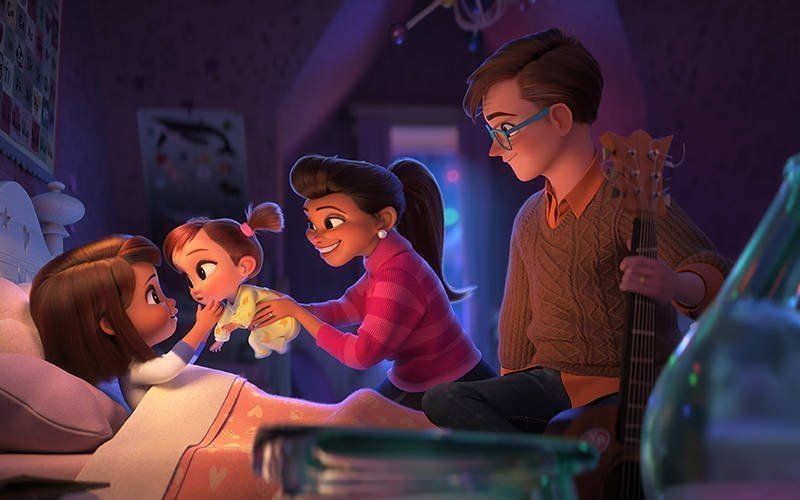 This is a scene from the animated movie "The Boss Baby: Family Business." The Catholic News Service classification is A-II -- adults and adolescents. The Motion Picture Association of America rating is PG -- parental guidance suggested. Some material may not be suitable for children. (CNS photo by DreamWorks Animation)

NEW YORK (CNS) — Its chaotic plot and somewhat colicky disposition may leave viewers of the sequel “The Boss Baby: Family Business” (Universal) wishing the stork had stayed home this time.

Admittedly, there’s little to object to in returning director Tom McGrath’s follow-up to his 2017 animated comedy, at least for teens and grown-ups. Yet the movie’s laughs are few, its pace frenetic and its tone irritating.

Decades, rather than mere years, have passed for the two main characters of the first film, brothers Tim (voice of James Marsden) and Ted (voice of Alec Baldwin) Templeton. Now grown to maturity, the pair — whose rivalry-turned-partnership was charted in the kickoff — also have become estranged.

Tim is a dedicated husband (his spouse, Carol, is voiced by Eva Longoria) and father of two girls. Ted, by contrast, is a hard-driving unmarried tycoon too busy to nurture relations with his relatives. Instead, he contents himself with buying them lavish presents.

The odd-couple siblings are compelled to work together, however, after Tim’s infant daughter, Tina (voice of Amy Sedaris) — who is inexplicably endowed, as was her Uncle Ted at her age, with some of the attributes of an adult — learns of a plot to disrupt family life worldwide.

The maniacal genius behind this scheme is none other than Dr. Erwin Armstrong (voice of Jeff Goldblum), the principal of the school Tina’s older sister, prodigiously smart Tabitha (voice of Ariana Greenblatt), attends. To enable Tim and Ted to infiltrate this establishment, Tina provides them with a magic potion that temporarily returns them to the ages they were in the original.

Goldblum evokes smiles with his scattered, wandering mad scientist act. But, for the most part, the rest of the humor falls flat.

A few lapses into language unsuitable for kids prevents endorsement for the youngest movie fans. And viewers of faith may be vaguely irked by a scene in which Tabitha seems at first to be saying bedtime prayers but instead turns out to be reciting the elements from the periodic table that hangs above her bed.

Otherwise, this is a harmless, though poorly crafted, picture, derived, like its predecessor (and the Netflix series “Boss Baby: Back in Business”), from the work of author and illustrator Marla Frazee. Michael McCullers’ script does promote teamwork and clan unity. But such positive values get lost amid breakneck action scenes seemingly designed to paper over a storyline as thin as it is erratic.

The film contains perilous situations, a mild oath and at least one crass term. The Catholic News Service classification is A-II — adults and adolescents. The Motion Picture Association rating is PG — parental guidance suggested. Some material may not be suitable for children.