Law improved much for disabled but much work remains, say advocates - Catholic Courier 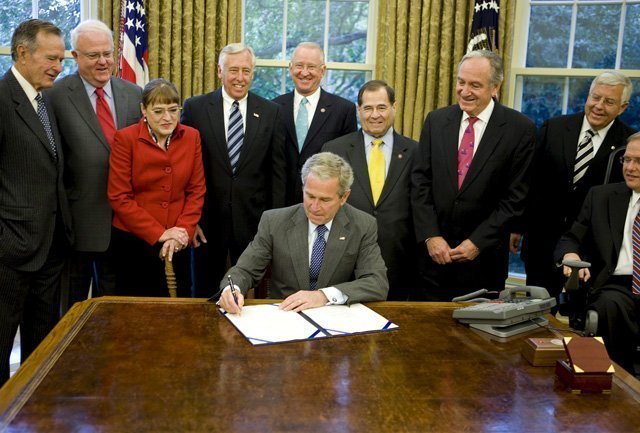 U.S. President George W. Bush signs the Americans with Disabilities Amendments Act of 2008 in the Oval Office of the White House.

WASHINGTON (CNS) — It was nearly 25 years ago, on July 26, 1990, that the Americans With Disabilities Act passed by Congress was signed into law by President George H.W. Bush.

So what has changed, and what still needs changing?

Janice Benton, executive director of the National Catholic Partnership on Disability, was working for its founding director, Mary Jane Owen, when the law was passed. She was able to attend the signing ceremony. "It was exciting. It was wonderful," Benton said. It also is believed to be the largest signing ceremony of a bill to date. The ceremony was on the White House lawn, partly because so many wanted to be there, and partly because the executive mansion itself hadn’t been made completely accessible.

In the law, disability was added to race, sex and creed as a category in which it was illegal to discriminate. "It was just wonderful to see that the government was going to provide these protections," Benton said.

However, the hiring of people with disabilities has not increased the way Benton has expected. "We’re still very discouraged to see that employment figures still have not risen as high as we had hoped. That’s one thing that everybody who’s looking at the ADA watches and recognizes," she told Catholic News Service.

Another gap in the bill was its exempting many religious institutions from having to provide accommodations. The Association of Christian Schools International, a trade group, cited cost for opposing the ADA and fought hardest for the exemption, which declares that religious properties are not "public accommodations."

Also exempted were many historic buildings. But that didn’t stop Rep. Jim Langevin, D-Rhode Island, from being the first member of Congress in a wheelchair to preside over the House on the 20th anniversary of the law in 2010. The House had just recently installed a wheelchair lift leading up to the speaker’s rostrum. "I have long said that I may be the first quadriplegic to serve in Congress, but I won’t be the last," Langevin said at the time.

The National Association of Evangelicals also opposed the ADA, citing its employment provisions, calling it "an improper intrusion (of) the federal government" into the hiring process."

Another criticism of the bill as it was being considered by Congress was that it would lead to a profusion of lawsuits. While the exact number of ADA-related lawsuits over the past quarter-century cannot be determined, the Justice Department has a Disability Rights Section, which has in recent months struck deals with Rapid City, South Dakota, and Washington County, Missouri, to ensure access to their government buildings.

Marian Vessels, director of the Mid-Atlantic ADA Center in the Washington suburb of Rockville, Maryland, has used a wheelchair since 1974 and can spot the positive changes. "Any observer, if you walk down the street, will spot more accessibility," she said. "Curb cuts. More wide bathroom stalls. Lower counters. You’ll see braille signage on room identifiers. You see sign language interpreting if you look at public displays and announcements."

As the baby-boom generation ages, they are finding the wisdom of having accommodations for their changing bodies. "Tremendously! Absolutely!" Benton laughed. "All of a sudden we’re realizing how important it is."

Much of what was left undone in the ADA was covered in the ADA Amendments Act, signed in 2008 by President George W. Bush. The new law broadened the definition of "disability" and added examples of "major life activities" as coming under the law’s protection, including, but not limited to, "caring for oneself, performing manual tasks, seeing, hearing, eating, sleeping, walking, standing, lifting, bending, speaking, breathing, learning, reading, concentrating, thinking, communicating and working."

While church buildings are exempt from the ADA and its companion law, the National Catholic Partnership on Disability teamed with other disability-rights groups, especially other faith-based organizations, in crafting a booklet calling denominations to moral accountability in their dealings with the disabled. The Catholic version was called "A Loving Justice," the Protestant version "Loving Justice."

"It was an interfaith course that worked, so we created it and published it and made it available for other denominations," Benton said. "It was (exploring) moral and legal responsibilities of the faith community under the ADA. It was a big deal that religious community was exempt, but it wasn’t (exempt from) the whole bill."

For Joan Palmer of Silver Spring, Maryland, her pastor’s decision some years ago to make areas of her parish church handicapped accessible has enriched her faith life. He regarded it as a moral obligation, she told CNS.

Palmer lost mobility in her legs about 10 years ago, requiring her to get around in a wheelchair. She had been diagnosed many years before with a neuromuscular disease.

She and her husband, Tom, began attending St. John the Evangelist Catholic Church, because there was no lift required to enter the front of the main church.

However, she found that her wheelchair blocked the aisle during Mass. Once she immersed herself into parish life, Palmer also discovered other parts of the church and its school that were difficult to access.

For instance, the stairs to the entrance of the school made it difficult to participate in parish activities and the steps in front of the downstairs chapel limited her ability to attend devotionals throughout the day and evening.

"I made an appointment and approached the pastor here at the time," she said, "and I just told him … ‘I feel like Jesus is being kept from me.’"

The National Catholic Partnership on Disability is one of 33 denominational members of the Interfaith Disability Advocacy Coalition, which mobilizes the religious community to speak out and take action on disability policy issues.

"I think it has made an enormous difference" in the lives of people with disabilities, said Curtis Ramsey-Lucas, who coordinates the work of the coalition, about the ADA. "Our society is far more open and accessible to people with a wide range of disabilities, It’s expanded opportunity in a variety of ways,"

Ramsey-Lucas, who is also director of interfaith engagement at the American Association of People With Disabilities, shares the dismay over employment figures. "I think of employment as the unfulfilled promise of the ADA," he said. "We haven’t made the kinds of strides that we’ve seen elsewhere."

While the ADA and the ADA Amendments Act help far more Americans now than before their enactment, an unfortunate dichotomy exists, Benton said. "My concern, as wonderful and important as the ADA is, it’s ironic that 25 years later, while we’re grateful for the rights and the protections, that we’re fighting for our lives," she said.

"You’ve got pre-natal diagnoses, you’ve got abortion, you’ve got 15 states trying to legalize assisted suicide. While we’re celebrating, we haven’t come as far as we need to in terms of appreciating people with disabilities in terms of their own dignity."

Contributing to this story was Chaz Muth.

Editor’s Note: A related video has been posted at https://youtu.be/2T15MqeV0LA.