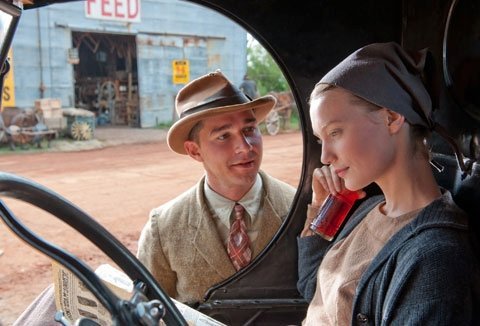 NEW YORK (CNS) — "Lawless" (Weinstein) is a morally tangled drama pervaded by a misguided sense of nostalgia. Director John Hillcoat’s period piece, adapted from Matt Bondurant’s 2008 fact-based novel about the exploits of his paternal grandfather and two great-uncles, "The Wettest County in the World," looks back with more than a little fondness on their violent adventures as bootleggers in Prohibition-era Virginia.

Though the siblings are shown to resort to force only in retaliation, and though they eventually cease and desist, their gritty story remains unsuitable for all but the most mature and discerning viewers.

Shia LaBeouf plays Jack Bondurant, the youngest, and initially gentlest, of the trio. Awed by his brawny elders, World War I veteran Howard (Jason Clarke) and Spanish flu survivor Forrest (Tom Hardy), Jack yearns to be taken seriously and treated as their equal.

They, in turn, want to keep Jack safely insulated from their escalating conflict with Special Deputy Charlie Rakes (Guy Pearce). Newly arrived from gangster-ridden Chicago, Rakes is anything but an ideal G-man. Corrupt and sadistic, he’s out to lay down his own version of the law — by any means necessary.

As Jack and his semi-disabled best friend Cricket (Dane DeHaan) try to finagle their way into the moonshining major leagues, Jack falls for Bertha (Mia Wasikowska), the sheltered daughter of a local preacher. Mumbling, inarticulate Forrest, meanwhile, fights his feelings for Maggie (Jessica Chastain), a woman with a past who has found shelter with the brothers.

As scripted by Nick Cave, "Lawless" tends to glamorize the mayhem the brothers wreak in their contest with Rakes; it does the same for a premarital bedroom encounter.

Granted that, left to their own devices, the Bondurants are fundamentally peace-loving and domestically inclined, and allowing for the vileness of the enemy they’re fighting, moviegoers will still need prudence to guide them through the ethical thickets. They’ll also need sufficient fortitude to resist giving way to the visceral reaction the proceedings seem calculated to elicit.

That’s assuming, of course, that the elements listed below have not put them off in the first place.