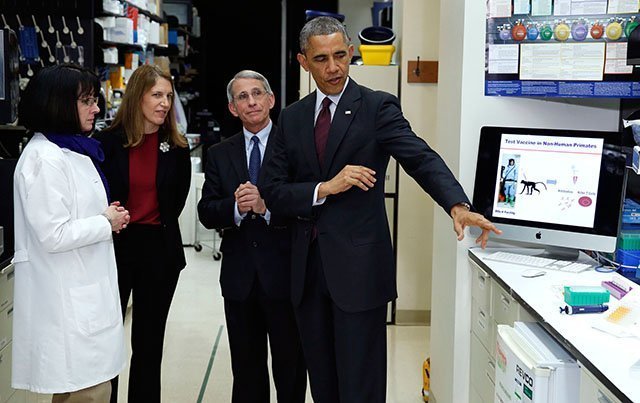 U.S. President Barack Obama tours the Vaccine Research Center with, from left, Dr. Nancy Sullivan, U.S. Secretary of Health and Human Services Sylvia Burwell and Dr. Anthony Fauci during a Dec. 2 visit to the National Institutes of Health in Bethesda, Md. A lawyer says the lower courts are still struggling with how religious organizations will relate to the HHS contraceptive mandate.

LEVITTOWN, Pa. (CNS) — Despite the positive experiences many have had with the Affordable Care Act, it has not been without controversy.

Most directly affecting Catholic institutions is the requirement that all employee health insurance policies cover contraceptives, sterilization and abortion-causing drugs, even if employers morally oppose such coverage.

Lori Windham, senior counsel at the Becket Fund for Religious Liberty, told Catholic News Service that "the lower courts are still struggling with how religious organizations relate to the (U.S. Department of) Health and Human Services mandate."

Becket, which defines itself as "a nonprofit public interest legal and educational institute with a mission to protect the free expression of all faiths," has acted on behalf of a number of Catholic and other religious groups in challenging these provisions of the ACA.

Windham said there were 15 cases — including several involving more than one plaintiff — pending before six different appeals courts as of the first week of December.

The mandate has a narrow religious exemption covers churches and some closely defined religious activities but not health care institutions, high schools, colleges and universities, Catholic Charities and similar agencies, and other religious and charitable endeavors.

The Catholic Church considers artificial contraception and abortion to be morally in conflict with natural law and objects to being required to provide contraceptives and abortion-inducing drugs.

The administration has an opt-out process for nonexempt employers that it considers a compromise. Under the opt-out rules, nonexempt employers inform the federal government they object to providing contraceptive coverage. The government in turn contacts the insurance company. The company or a third party, such as the administrator of a plan, must then provide the coverage at no cost to employees.

A number of church entities — as well as non-Catholic religious groups and family-owned for-profits — object to even that level of involvement with providing the drugs and devices. The law calls for the imposition of heavy fines for employers that either cease to provide health insurance for their employees — $2,000 per employee per year — or refuse to provide contraceptives — $100 per employee per day).

As legal challenges move through the federal courts, injunctive relief has been granted and so far no fines have been levied.

The 15 cases to which Windham referred will probably work their way up to the Supreme Court over the course of the next several months, she said. In June the high court ruled 5-4 that Hobby Lobby and Conestoga Wood Specialties need not comply with the mandate. What impact the decision in favor of the two for-profit, closely held companies will have on other cases was unclear.

On a separate matter, in line with the provisions of the Hyde amendment, federal funds including ACA subsidies are not supposed to be used to pay for abortions except in cases of rape or incest or to save the life of the mother.

Some states have more or less restrictive regulations on abortion. Insurance companies are supposed to segregate funds so that premium costs for abortion coverage are kept segregated and not paid with federal dollars and so coverage is in line with state laws. Also, each insurance marketplace is supposed to offer at least one policy that does not cover elective abortions, in keeping with the Hyde provisions.

But pro-life activists have complained that it is difficult to know which policies exclude abortions and when and how that information is to be disclosed to the consumer. There is a movement in Congress to force greater transparency on this issue.

The Supreme Court has agreed to hear a case that may have a significant impact on the ACA’s survival. The ACA was drafted with the expectation that states would set up exchanges — "marketplace" and "exchange" are used interchangeably — through which consumers could shop for and purchase insurance.

The ACA provides for subsidies to consumers who purchase policies through such exchanges. But some two-thirds of states have refrained from setting up their own exchanges, letting consumers rely instead on the federal exchange — healthcare.gov — or a federal-state hybrid.

The plaintiff in the case, King v. Burwell (Sylvia Mathews Burwell is the current U.S. secretary for Health and Human Services) contends that the language of the law is clear and it is illegal for the federal government to provide subsidies for policies purchased on federal exchanges. The absence of subsidies would drive many consumers out of the market, causing them to lose their newly acquired coverage.

Many of those would be the younger and relatively healthy people who traditionally have gone without insurance, and the change would drive up premiums for those left in the market and potentially cause considerable upheaval in the health insurance system. The case is likely to come before the court sometime in the spring of 2015.