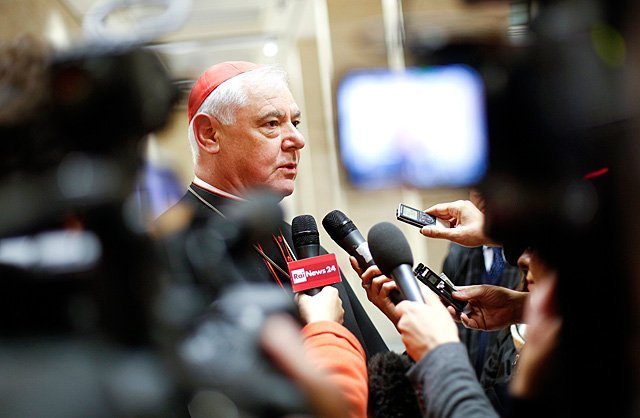 German Cardinal Gerhard Muller, doctrinal congregation prefect, speaks during a news conference in Rome in February. Cardinal Muller voiced "increasing concern" about the LCWR's promotion of the "concept of conscious evolution" and "directional statements" of some member congregations.

WASHINGTON (CNS) — The recent rebuke of the officers of the Leadership Conference of Women Religious by the head of the Vatican’s doctrinal office should be viewed as one part of his entire remarks and one aspect of the group’s visits and ongoing dialogue with Vatican officials, according to a statement by LCWR officers.

In his April 30 meeting with LCWR officials, Cardinal Gerhard Muller, prefect of the Congregation for the Doctrine of the Faith, voiced “increasing concern” about the LCWR’s promotion of the “concept of conscious evolution” in various publications and “directional statements” of some member congregations. He also criticized the group’s plan to honor a Catholic theologian, St. Joseph Sister Elizabeth Johnson, whose work he said has been judged “seriously inadequate.”

The cardinal made the remarks in an address to the presidency of the LCWR, a Maryland-based umbrella group that claims about 1,500 leaders of U.S. women’s communities as members, representing about 80 percent of the country’s 57,000 women religious. The group is currently undergoing a major reform ordered by the Vatican in 2012.

“Over the past several days, there has been much public commentary on the opening remarks” of Cardinal Muller, LCWR officers said in a May 8 statement.

The group’s leaders described the cardinal’s address as “constructive in its frankness and lack of ambiguity. It was not an easy discussion, but its openness and spirit of inquiry created a space for authentic dialogue and discernment.”

They also said their meeting with the cardinal should be viewed within the context of all of their visits to Vatican offices where they “experienced a culture of encounter, marked by dialogue and discernment.”

In 2012, the Vatican announced a major reform of the LCWR to ensure its fidelity to Catholic teaching in areas including abortion, euthanasia, women’s ordination and homosexuality. The Vatican appointed Seattle Archbishop J. Peter Sartain to implement the congregation’s “doctrinal assessment,” by providing “review, guidance and approval, where necessary, of the work” of the LCWR.

The archbishop, who also attended the April 30 meeting with LCWR officials and superiors of the Congregation for the Doctrine of the Faith, said in a May 5 statement that Cardinal Muller’s opening remarks “invited a frank and open discussion by those present” and that a “respectful conversation” followed.

He said the cardinal “thanked the sisters for the progress being made in the revision of the LCWR statutes and civil by-laws” and also spoke of “an incalculable debt” he owed to the women religious he has known throughout his life who influenced his faith and his vocation.

The archbishop said Cardinal Muller expressed concern about aspects of the mandated reform of LCWR that had not yet been addressed and asked the group’s leadership for “clearer signs of collaboration with the Holy See” and with their archbishop delegate.

Archbishop Sartain said he is “in full agreement with the issues raised by the cardinal” and said that during the past two years he has frequently discussed these topics with the LCWR leadership and will continue to collaborate with them.

“It is in the context of that relationship that we will continue to address the important matters,” he said.

LCWR leaders expressed a similar desire to continue to dialogue, emphasizing in their statement: “We have come to believe that the continuation of such conversation may be one of the most critical endeavors we, as leaders, can pursue for the sake of the world, the church and religious life.”

They also expressed disappointment about how they continue to be perceived by the Congregation for the Doctrine of the Faith.

“During the meeting, it became evident that despite maximum efforts through the years, communication has broken down and as a result, mistrust has developed,” the LCWR leaders said, adding that they do not “recognize ourselves” in the CDF’s doctrinal assessment and that their attempts to “clarify misperceptions have led to deeper misunderstandings.”

The group’s leaders noted that “in some ways, for LCWR, nothing has changed. We are still under the mandate and still tasked with the difficult work of exploring the meaning and application of key theological, spiritual, social, moral, and ethical concepts together as a conference and in dialogue with the Vatican officials.”

“This work is fraught with tension and misunderstanding. Yet, this is the work of leaders in all walks of life in these times of massive change in the world,” they added.