Leader of the Personal Ordinariate of the Chair of St. Peter visits Irondequoit - Catholic Courier 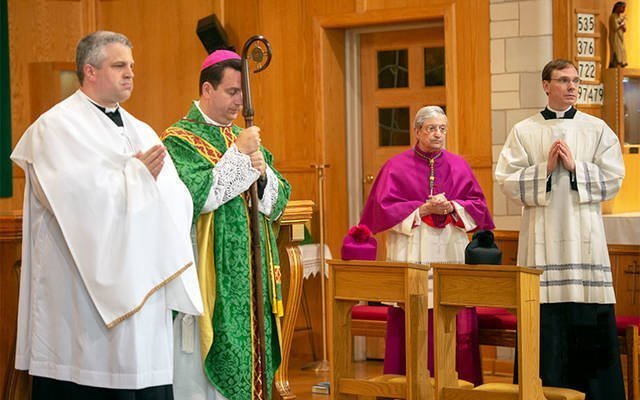 IRONDEQUOIT — A group of Catholics from largely Anglican backgrounds recently celebrated their common bonds with the Diocese of Rochester during a liturgy featuring the bishops of both faith communities.

Bishop Steven Lopes, leader of the Personal Ordinariate of the Chair of St. Peter, celebrated a Mass Aug. 26 at St. Cecilia Church. Rochester Bishop Salvatore R. Matano was present as well, participating in choir dress — attire denoting his presence in the sanctuary without serving as celebrant or concelebrant. Bishops Matano and Lopes also served as presenters at a Meet the Ordinariate Night, held the previous evening at St. Cecilia and featuring the theme of “The Ordinariate, Mutual Enrichment, and the New Evangelization.”

Based in Houston, Texas, the Personal Ordinariate of the Chair of St. Peter was established by Pope Benedict XVI in 2012 for people who had been raised in the Anglican tradition but wished to become Catholic while preserving many of their liturgical and spiritual customs. The distinct Anglican customs date back to the 16th century when the Church of England broke with Rome during the Reformation, thus creating the Anglican Church.

A personal ordinariate is comparable to a diocese, but its geography can span multiple countries. There are currently three personal ordinariates for former Anglicans worldwide: of the Chair of St. Peter, which covers the U.S and Canada; of Our Lady of Walsingham, in England and Wales as well as Scotland; and of Our Lady of the Southern Cross, in Australia and Japan.

In Rochester, the Chair of St. Peter ordinariate is represented by the Fellowship of St. Alban. That fellowship is a community of Anglicans, former Anglicans and people of other Protestant backgrounds who began meeting shortly after Pope Benedict’s 2009 decree Anglicanorum Coetibus allowing for the foundation of personal ordinariates. Members of the local fellowship gathered for several years at Church of the Good Shepherd in Henrietta before relocating to St. Cecilia in February 2018.

Father Evan Simington, parochial administrator for the Fellowship of St. Alban, emphasized that attendance at a Fellowship of St. Alban Mass “absolutely” fulfills the Sunday obligation for all Catholics. He noted that the ordinariate is in full communion with the Roman Catholic Church and that in 2015 the Vatican issued Divine Worship: The Missal, a definitive set of liturgical texts for personal ordinariates drawn from Anglican sources and the Third Edition of the Roman Missal.

Among the distinct liturgical elements in the Aug. 26 Mass were Bishop Lopes facing ad orientem (liturgical east) rather than toward the congregation for most of the prayers; a large portion of the Mass being sung; worshipers kneeling in the first row of pews to receive Holy Communion; and prayers featuring the words “thee,” and “thy” in place of “you” and “your.” For instance, “The Lord be with you” was followed by the response “And with thy spirit.”

Father Simington said the Fellowship of St. Alban comprises approximately 10 families, and that an average of 30 people attend the fellowship’s weekly 11:30 a.m. Sunday Mass at St. Cecilia. However, he said many lifelong Roman Catholics “who have sort of found an attraction to what we do” also have become connected with the fellowship. The Aug. 26 Mass attracted more than 100 people, and the Meet the Ordinariate event drew about 80.

Along with the weekly 11:30 a.m. Mass at St. Cecilia, the Fellowship of St. Alban offers Masses on holy days of obligation as well as special feast days. It also celebrates evensong, an Anglican evening prayer comparable to parts of the Liturgy of the Hours.

Father Simington, who was raised an Episcopalian, has led the Fellowship of St. Alban since July 2017, one month after he was ordained to the priesthood in Houston by Bishop Lopes. Under an agreement between Bishops Lopes and Matano, Father Simington devotes three-quarters of his priestly duties to serving as parochial vicar of Irondequoit’s St. Kateri Tekakwitha Parish, to which St. Cecilia Church belongs.

EDITOR’S NOTE: To learn more about the Fellowship of St. Alban, visit www.stalbanfellowship.org.