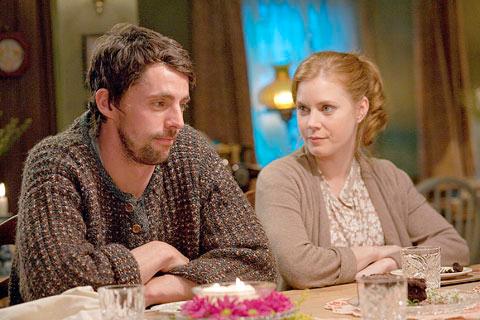 Matthew Goode and Amy Adams star in a scene from the movie "Leap Year." (CNS photo by Universe)

NEW YORK (CNS) — With its action set mostly in Ireland, the likable romantic comedy “Leap Year” (Universal/Spyglass) features background details of life on the Emerald Isle more akin to 1952’s “The Quiet Man” than to the post-Celtic Tiger contemporary reality. But the film’s central, opposites-attract relationship is old-fashioned in the best sense, with physical restraint on the part of its main characters allowing room for a dexterously acted, if somewhat formulaic, portrayal of their deepening emotional engagement.

Hating each other at first sight (and thus bound to fall for each other eventually) are controlling Boston real estate consultant Anna (Amy Adams) — who specializes in temporarily decorating empty apartments to make them more appealing to prospective buyers — and laidback Dingle Peninsula innkeeper Declan (Matthew Goode).

Anna’s plans to surprise her commitment-shy live-in boyfriend Jeremy (Adam Scott) by following him to Dublin, where he’s attending a cardiologists’ convention — and where she hopes to take advantage of a Sadie-Hawkins-like national tradition allowing women to propose on Leap Day — have been derailed by the weather, stranding her in Declan’s picturesque but out-of-the-way corner of the world with Feb. 29 looming.

So, despite their initial head-butting, Anna hires Declan, who doubles as the local taxi driver, to get her to the capital in his “classic” (read barely operative) auto.

Amid the adventures that follow, Anna learns to relax, and the outwardly unflappable, but repressed Declan gradually opens up about the emotional scars inflicted by a previous relationship. Perhaps, ironically, because of her existing commitment — such as it is — to the insufferably smug Jeremy, Anna and Declan resist giving way to their growing attraction, even during a stay at a roadside bed-and-breakfast where they must pretend to be married to gain admittance to the one room — and one bed — on offer.

Though they share the bed, and though he jokes about the transparency of the shower curtain that substitutes for a bathroom door, the pair go no further than the passionate kiss demanded of them by their hosts, over an after-dinner drink, as a token of their newlywed ardor.

As scripted by Deborah Kaplan and Harry Elfont, director Anand Tucker’s Hibernian idyll — which includes two sympathetic if incidental priest characters — thus allows the couple’s discovery of each others’ endearing qualities to unfold at a natural pace and in circumstances that make it, despite the elements described below, probably acceptable for older teens.

The film contains implied cohabitation, some mildly sexual humor, at least two uses of profanity, one of the S-word and a few crass terms. The USCCB Office for Film & Broadcasting classification is A-III — adults. The Motion Picture Association of America rating is PG — parental guidance suggested. Some material may not be suitable for children.