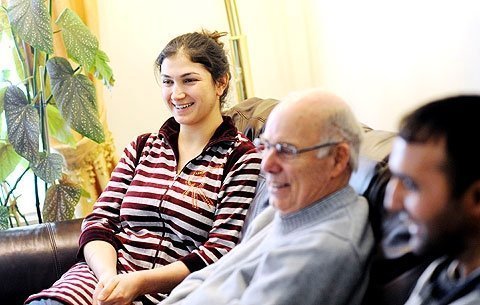 Maira Dursunova (left) and her husband, Islam Aliyev (right), smile as they talk about Ron Anderson (center), a Mercy Bridges volunteer who helped them adjust to life in the U.S. after they emigrated from Russia.

HENRIETTA – Islam Aliyev recently handed a letter from Monroe Community College, where he studies English as a second language, to his friend and former tutor Ron Anderson.

Aliyev asked Anderson: What did the phrase "Dean’s List" mean?

Anderson explained that the dean of a college is like the president, and that making the Dean’s List was a great accomplishment.

The couple had arrived in Rochester in 2007, after fleeing persecution as ethnic Turks in Russia.

"When we first saw Islam and Maira, they could barely speak English," Anderson said during an interview at Aliyev and Dursunova’s apartment in Henrietta. "We would have a difficult time communicating."

He and Aliyev pored over pictures books showing produce commonly found at American supermarkets. Anderson said he insisted the couple speak to each other in English at least 10 to 15 minutes each day, and their other homework was to practice writing on topics provided by the Andersons. They also studied American life, culture and government through essays Ron Anderson wrote each week. Aliyev learned how to answer the phone, and Kay Anderson showed Dursunova how to read and cook from a recipe.

Anderson, 77, a retiree of the Rochester Democrat and Chronicle, no longer officially tutors Aliyev, 31, and Dursunova, 27. But he still is a frequent visitor to their home, and often helps them decipher mail or fill out paperwork. Now he is tutoring a medical doctor from Bulgaria who needs help with English so he can practice in the United States.

"I love doing this," said Anderson. "I meet great people. These guys are like family."

That’s one of the aims of the Mercy Bridges program, said Executive Director Sheryl Feigenbaum.

She became executive director of Mercy Bridges in 2010. A sponsored ministry of the Sisters of Mercy of the Americas New York, Pennsylvania and Pacific West Community, Mercy Bridges pairs volunteers with learners to offer free reading, writing and speech tutoring services. Although the program is based at the Mercy Center location in Brighton, tutors and learners meet at public locations throughout the community.

There are between 80 and 100 active learner-tutor pairs, Feigenbaum said, and there is always a long list of learners waiting for a tutor with expertise in the area in which they require tutoring. Tutors must have a high-school diploma or the equivalent, and must undergo a background check. Tutoring is conducted on a confidential basis.

She noted that the program’s $130,000 budget is funded solely by grants and donations, and the program is looking to expand partnerships with area corporations to help with funding and tutor recruitment.

Learners can spend up to two years in the program, and tutors commit to tutoring for two hours a week once a week for a year.

"Tutors do not need to have a teaching background to be successful tutors," Feigenbaum said. "They just have to have a passion for working with others and a willingness to reach out."

Tutors also receive training workshops several times throughout the year and can use materials from the program’s resource library. She noted that communication problems can sometimes be a source of embarrassment or painful memories for learners. A tutor is taught how to build up a learner’s confidence and self-esteem, and learners of a range of abilities and backgrounds are accepted into the program.

Since its inception, 357 learners have gone through the program.

"The more people we can help, the better," Feigenbaum said.

She explained that helping people learn to communicate better can help strengthen their bonds to the community.

Dursunova said she felt scared and alone before she was matched with Kay Anderson in Mercy Bridges. During tutoring sessions, she and Kay used to talk about life and their children.

Now one day, she and her husband would like to be college graduates and own their own home, and Dursunova said she’d like to volunteer.

It’s all part of their American dream, Ron Anderson noted.

"We’ve talked a lot about what it means, and they are trying to realize it," he said.