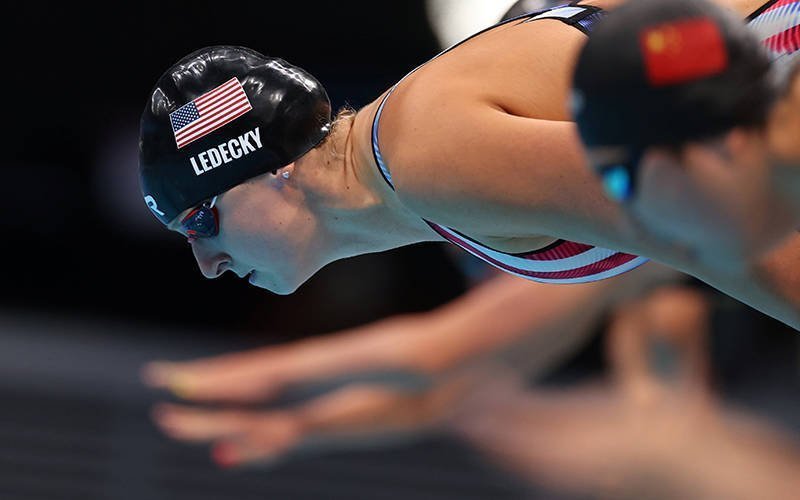 Katie Ledecky of the United States gets ready enter the pool for the women’s 1500m freestyle final during the 2020 Tokyo Olympics July 28, 2021. The 2015 graduate of the Stone Ridge School of the Sacred Heart in Bethesda, Md., won the gold medal in the Olympic debut of the event. (CNS photo by Marko Djurica/Reuters)

WASHINGTON (CNS) — U.S. swimmer Katie Ledecky won the Olympic gold medal July 28 for the women’s 1,500-meter freestyle, a new event, on the heels of coming in fifth place in the 200-meter freestyle.

The 24-year-old swimmer, who went to a Catholic elementary school and high school in Maryland, told reporters at the Tokyo Olympics after her comeback that the most pressure she feels is the pressure she puts on herself.

“People maybe feel bad for me not winning everything, but I want people to be more concerned about other things going on in the world,” she said.

The win — completed in 15 minutes and 37 seconds — was Ledecky’s sixth Olympic gold. Erica Sullivan of the U.S. won silver and Sarah Kohler of Germany won the bronze.

In the hour between the two races when she swam in the warm-down pool, she said she focused on her grandparents.

This emphasis coincidentally was just days after the Catholic Church celebrated its first World Day for Grandparents and the Elderly. In his homily for the July 25 celebration, Pope Francis wrote that grandparents are a “precious source of nourishment.”

And in the Tokyo Olympic pool, that certainly seemed to be the case.

Ledecky said that after the 200-meter race when rival Ariarne Titmus of Australia came in first and she didn’t get a medal, her coach told her to let the loss sit with her or to be angry about it to fuel her next race.

Titmus also beat Ledecky July 26 in the 400-meter freestyle by just two-thirds of a second, taking the gold medal. Ledecky got the silver. After that race, Ledecky told NBC that she “fought tooth and nail” and couldn’t be disappointed with her performance.

But gearing up for the 1,500-meter freestyle race, in which Titmus wasn’t not competing, Ledecky mentally focused her stroke on her four grandparents, two of whom are still living.

“I was trying to find some positive things to get me moving forward,” she said at a news conference.

“I really love them all and it makes me really happy to think about them. They’re four of the toughest people I know,” she said, adding that she knew if she was thinking about them, she wouldn’t tire out at the end or have a bad race.

With all eyes on world-recorder holder Ledecky in this Olympics — especially on the day when Simone Biles withdrew from the individual all-around final in women’s gymnastics — the swimmer described her personal drive as both a “blessing and a curse.”

The blessing part is felt by fans from her Catholic high school alma mater, Stone Ridge School of the Sacred Heart in Bethesda, Maryland, a suburb of Washington.

The school held a July 19 pep rally for Ledecky and another alumnae and Olympic swimmer, Phoebe Bacon, right near the building with the pool where Ledecky, a 2015 graduate, and Bacon, a 2020 graduate, once trained.

Catherine Ronan Karrels, head of Stone Ridge School, hopes the swimmers will come back to visit after Tokyo to be congratulated in person.

In 2012, prior to the London games, her first Olympics, Ledecky told the Catholic Standard, Washington’s archdiocesan newspaper, that her Catholic faith is very important to her, and she prays a Hail Mary while warming up for an event, which helps calm her nerves.

She also credited the Sisters, Servants of the Immaculate Heart of Mary, who formerly ran Little Flower School, the elementary school she attended in Bethesda, as great role models who were a big part of her faith when she was growing up.

Because of COVID-19 restrictions, Ledecky’s family could not be at the Tokyo Olympics, but they attended the U.S. Swim Team Olympic Trials in June in Omaha, Nebraska, where Ledecky qualified to swim freestyle in the 200-, 400-, 800- and 1500-meter races, as well as the 4×200-meter freestyle relay race.

Contributing to this report was Maureen Boyle, who writes for the Catholic Standard, newspaper of the Archdiocese of Washington.