Legend of the Guardians: The Owls of Ga'Hoole - Catholic Courier 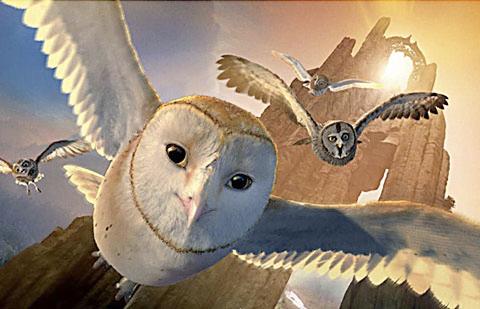 NEW YORK (CNS) — The visually engaging 3D animated adventure "Legend of the Guardians: The Owls of Ga’Hoole" (Warner Bros.) offers family audiences a sound, if not overly original, narrative of downtrodden right versus overweening might. But intense scenes of animal combat preclude endorsement for the very youngest of this otherwise unobjectionable tale.

Raised on bedtime stories about a legendary band of heroic warrior owls known as the Guardians, young dreamer Soren– who aspires to follow in the Guardians’ footsteps — finds his courage put to the test when he and his brother, Kludd (voice of Ryan Kwanten), fall from their nest while learning to fly and are kidnapped.

Transported to the dark lair of a force of militaristic owls who call themselves the Pure Ones, Soren is consigned to slavery by their scheming sovereign, Queen Nyra (voice of Helen Mirren). But the cynical Kludd — who resolutely denies the existence of the Guardians — turns collaborator and is assigned to military training as one of Nyra’s minions.

Soren befriends and protects diminutive fellow captive Gylfie (voice of Emily Barclay) and, with the help of a sympathetic guard, the pair escapes. They embark on a trying quest to enlist the help of the Guardians — who prove to be real after all — to defeat Nyra’s malicious plans for using secret technology to dominate all other owls.

Along with story elements that evoke traditional tales of chivalry — including Soren’s eventual squire-like apprenticeship with knightly Ezylryb (voice of Geoffrey Rush), a veteran Guardian — there are also strong echoes of the ideological struggle underlying World War II.

Thus the Pure Ones, who worship power and brute force, spout rhetoric about the superiority of their subspecies that recalls the Nazis’ malignant racial theories. Under the leadership of the Churchillian Ezylryb and his cautious fellow commander, Allomere (voice of Sam Neill), by contrast, the Guardians — whose motto is "mend the broken, make strong the weak and vanquish evil" — resort to force only with reluctance and in the cause of justice.

While a series of harsh, though far from graphic, airborne duels between owls armed with razor-sharp metal talons reinforce this peace-loving message, they will likely scare small fry who may also be disturbed by the variety of dangers to which Soren is subjected.

As for adult Catholics, they may be left pondering the fact that Nyra’s nightmarish realm is called the "St. Aegolius Academy for Orphaned Owls." Is this meant to be a jibe at totalitarian doublespeak or a swipe at church-run institutions? As penned by John Orloff and Emil Stern, the script gives no definitive hint.

Passing references to an owl deity named Glaux ("Thank Glaux that…") are equally vague. Is this simply the owl name for God or are the nocturnal birds on to something we humans have missed?

"Legend of the Guardians: The Owls of Ga’Hoole" will be shown on both Imax and conventional screens.

The film contains strong, though stylized, violence and situations of peril. The Catholic News Service classification is A-II — adults and adolescents. The Motion Picture Association of America rating is PG — parental guidance suggested.