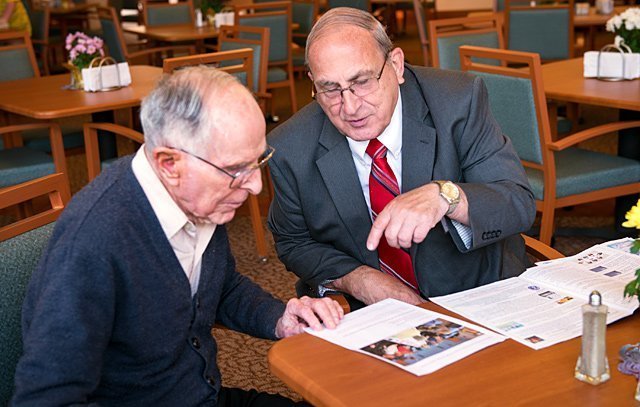 Father Tom Dugan speaks with Jim Alessi, Legion of Mary's Rochester Comitium, during a visit to the Sisters of St. Joseph Motherhouse in Pittsford, June 1.

Within the past year, new chapters — or praesidia — of the Legion of Mary have sprung up at St. Joseph Parish in Penfield and St. Jerome Parish in East Rochester. Local leaders of the Legion, which has had a presence in the Diocese of Rochester since 1939, hope these new groups represent the beginning of a resurgence for the lay apostolate.

“I think there’s a real hunger in the lives of people for spirituality and for an opportunity to evangelize, and the Legion of Mary offers both to people,” remarked Father William Leone, pastor at St. Jerome and spiritual director of the Legion of Mary’s Rochester Comitium, which oversees all 11 of the Legion’s praesidia within the diocese.

The Legion of Mary is a lay apostolate whose members throughout the world seek to glorify God and sanctify themselves through prayer and works of mercy, according to Jim Alessi, president of the Legion of Mary’s Rochester Comitium. The active members of each praesidium meet once a week for about an hour to pray the rosary, listen to a reflection from their spiritual director and do some spiritual reading. During these meetings each member is assigned two hours of service to complete in the next week. The assignments are determined by the pastor of the parish that hosts the praesidium, Alessi explained.

“Whatever the parish needs is what we try to do because we feel like we’re the extension of the priests. Anything they suggest, we’re off to do it,” he said. “The priest may not come to the meeting but he gives the president the work he wants done.”

Sometimes these assignments involve work in faith formation or prison ministry, but many of them involve visiting hospitalized or homebound parishioners or nursing-home residents, Alessi said. By taking on these visitations, Legion members lighten the workload for the priests in their parishes, according to Father Justin Miller, parochial vicar at both St. Joseph and Holy Spirit parishes in Penfield. Parishioners from both parishes participate in St. Joseph’s praesidium.

“It’s been very great for us, with many nursing homes and even more assisted living facilities in Penfield. It’s been great for us to have wonderful volunteers from the Legion of Mary go and visit these individuals,” Father Miller said. “They don’t just visit them once and (say) goodbye, but visit them on an ongoing basis to bring Jesus to them through their presence.”

Many of the people Legion members visit are hungry for human contact and interaction, noted Janice Caretta, president of the praesidium that meets at St. Kateri Parish in Irondequoit. Caretta regularly visits hospitals and nursing homes, but lately she’s been devoting much of her time to trying to start a local Junior Legion of Mary praesidium for teens.

“It’s like with anything, if you get children interested at a younger age, no matter what it might be, they can carry that through into their adult life,” said Caretta, who with Alessi has been visiting parishes and Catholic schools to drum up interest in the Junior Legion.

Back in the 1950s, the Junior Legion was quite popular among young people, noted Alessi, who as a young man belonged to a Junior Legion praesidium at St. Anne Parish in Rochester. He had joined the Junior Legion because he wanted to learn more about his faith, Alessi recalled.

“The people that I met there I really liked,” he said, noting that he met many dear friends, including his late wife, through his involvement with the Legion. “I’ve learned more about my Catholic faith from the Legion of Mary than I did from going to Catholic college or anything else.”

In addition to the weekly meetings and acts of service, Legion members also frequently participate in retreats and social activities. In April members of the various groups in the Rochester Comitium participated in a retreat at Abbey of the Genesee in Piffard, in May they made a pilgrimage to the Our Lady of Fatima Shrine in Lewiston and this summer they will hold a picnic at Camp Eastman in Irondequoit.

The fellowship among members, who refer to each other as brother and sister, is one of Carolyn Knight’s favorite things about the Legion. Knight, who is secretary of both the Rochester Comitium and the praesidium at Holy Trinity Parish in Webster, said Legion members inspire each other to grow in their faith and not become complacent.

“You’re meeting weekly with other people and maybe their backgrounds are different from yours, but you all have something very important in common, which is you love your Catholic faith,” Knight explained. “You want to live it out to the best of your ability. Sometimes you’ll hear what somebody else is doing or something they’ve said, and it lights a spark for your own spiritual growth.”