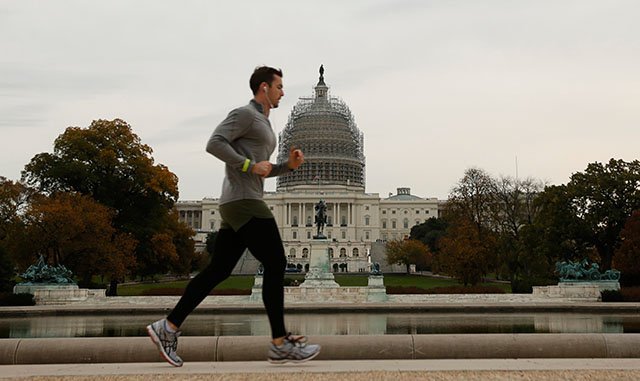 A morning jogger passes the U.S. Capitol in Washington Nov. 5. Republicans rode a wave of voter discontent to give them a majority in the Senate, which effectively will limit President Barack Obama's legislative agenda during his last two years in office.

WASHINGTON (CNS) — The next Congress, with Republicans in the majority in both chambers, will have a full plate of unfinished legislation when it convenes in January.

It’s always possible, though, that the post-election lame-duck session could represent an appetizer of sorts to clear up stalled legislation — or an un-appetizer, if the same gridlock that has stymied bills in recent years rears its ugly head once more.

Republicans want to be viewed as a party that can govern — not just bottle up bills in the Senate with the threat of a filibuster, or pass legislation in the House that leaders know will have no chance of passage in the upper chamber.

What are some potential issues Americans could see addressed with either a GOP majority in place in Congress, or in advance of the coming Republican majority?

A spending bill has immediate impact. Sen. Mitch McConnell, R-Kentucky, the Senate minority leader who’s due for an upgrade in status come January, has already said he has no interest in shutting down the government once more. The current spending authorization expires Dec. 11, meaning the Democratic-controlled Senate will get to weigh in before it stops wielding the gavel. Last year’s 16-day government shutdown was deplored by the U.S. bishops among many, many others.

The Affordable Care Act, which has been the target of dozens of repeal votes in the House in the past four years, will likely be revisited. The bishops have long supported affordable health care for all, but their main objection to the law is its mandate that most employers, including religious employers, provide insurance for artificial birth control, sterilization and abortion-causing drugs even if they morally oppose such coverage.

Thom Shellabarger, a public policy associate for Interfaith Worker Justice and a former domestic policy adviser to the U.S. bishops, suggested an uncertain future at best once the new Congress is sworn in.

"It’s going to be an interesting Congress. I don’t know how much working people are going to love this," Shellabarger told Catholic News Service Nov. 13. "I think working people are going to find themselves on the outside looking in. We’ve had people across the country who’ve spoken about the minimum wage, and states that raised the minimum wage, but the speaker of the House (John Boehner, R-Ohio) is not even going to take the issue up. If we had a vote in both houses, we could win, but I don’t think we’re going to get a vote."

Instead of trying to get Congress to do things, public policy advocates may prefer inaction on their most cherished issues.

"We’ll try to hold back Congress from doing bad things," Shellabarger said. One example, he added, would be changes in working conditions, like getting rid of overtime pay. "Now that they’re in control of both houses, that possibility is going to exist," he said.

Another possibility is "changes to the tax code that benefit the wealthy against working people," he said. But if the GOP tries to make those tax breaks permanent, Democrats may seek a quid pro quo in making a fully refundable earned income tax credit permanent; it is scheduled to expire in 2017.

Another route to policy is through the executive branch. One policy Shellabarger suggested was for the Department of Labor to require the issuance of pay stubs to all workers so they have details on how much they are being paid and how much pay is being withheld for taxes. States and local action may come more into play as well, he added, such as with minimum wage laws. With enough momentum, "we can force Congress to act," he said. "Employers are going to want consistency across the board."

Sen. Amy Klobuchar, D-Minnesota, a Catholic, already had a list of priorities for bipartisan cooperation the day after the election. Speaking to the "Faith, Food & the Environment" symposium in St. Paul, Minnesota, Klobuchar put trade, hunger and climate change on her list.

"Fast track" legislation that would prohibit Congress from making amendments to international trade deals has already surfaced as one area where both parties could cooperate; outgoing Senate Majority Leader Harry Reid, D-Nevada, an opponent of the proposed Trans-Pacific Partnership trade treaty favored by President Barack Obama, has blocked consideration of a fast-track bill.

There’s also the inside-baseball policy interpretations to look at. Will Republicans be intent on cutting the deficit? If so, by cutting taxes or entitlements, or both? How will bills be "scored" by the Congressional Budget Office for their impact? It’s too early to tell.

There’s leftover business, like a vote on the Keystone XL oil pipeline and a slew of presidential nominees for the Senate to consider that could augur well for a new can-do spirit between the parties. (There was a renewed effort to pass the Keystone measure in the waning days of the current Congress. The House OK’d it Nov. 14; a Senate vote was expected Nov. 18. But the Obama has threatened to veto similar legislation.)

However, the Nov. 12 accord reached between the United States and China on greenhouse gas emissions stirred ire among Republican leaders who contend it will lead to more joblessness among Americans.

Another contentious issue is immigration. The U.S. bishops have long advocated for immigration reform measures only to see congressional action get stymied time and again. The likelihood of Obama using his executive authority to change immigration policy after a decade of congressional inaction brought a squall of warnings from Republican leaders who said such action could poison the well of bipartisan cooperation. Boehner refused to rule out another government shutdown should Obama go through with his executive orders.

It looks as if 19th-century French journalist and critic Jean-Baptiste Alphonse Karr was on to something when he said, "The more things change, the more they stay the same."