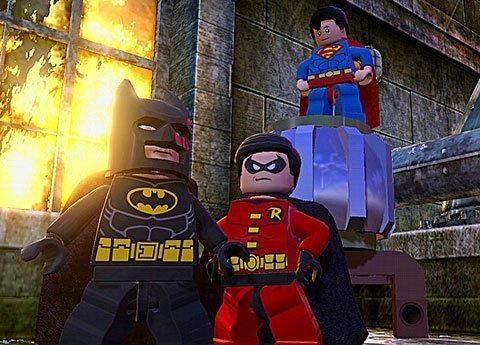 NEW YORK (CNS) — The comic-book hero Batman and the classic Danish building-block toy Lego may not, initially, appear to have much in common. Although both have been staples of postwar entertainment — Bruce Wayne’s alter ego made his print debut in 1939, just as the European phase of World War II was about to begin, and Lego was first manufactured 10 years later — surely there can’t be much that connects them.

The premise of the series is to take popular movie franchises and reimagine them within the world of the familiar plastic bricks. Success has already been had with adaptations of the Harry Potter, Indiana Jones and Star Wars series.

What results is puzzle-based gameplay based on rearranging parts of the environment as youngsters across the world do every weekend on their living-room floors. The electronic version, though, benefits from an efficient and humorous story based in the DC comic-book universe. Better yet, it can’t be ruined by the missteps of a clumsy-footed sibling.

In "Lego Batman 2," the infamous villains Joker and Lex Luthor — accompanied by a gang of ne’er-do-wells — team up in order to wreak havoc on the perpetually bullied Gotham City with a new weapon called "The Deconstructor." As usual, the dynamic duo of Batman and Robin must respond, aided by a collection of their ultra-powered friends such as Superman, Wonder Woman and Green Lantern.

The meat of the gameplay is the aforementioned problem-solving, this time using a variety of ability-laced suits, accompanied by bouts of fisticuffs. So the Caped Crusader might rebuild a destroyed wall, while his loyal sidekick changes into a nearby "Acrobat Suit" that allows Robin to swing and jump to the next area via the new construction.

Regrettably, many of the tasks are recycled as the game goes on, and the repetitive fighting feels like padding.

A multiplayer option allows gamers to cooperate rather than battle each other as adversaries. So a willing Mom or Pop can step into one of the roles and work with a child toward a common goal.

Additionally, on top of the normal story comes a surprising amount of extra missions, as well as the ability of the gamer to roam freely around Gotham collecting various items and extra characters. Zooming around the city as Superman with composer John Williams’ famous theme piping through the speakers is a pleasure that could leave Junior having to remind Dad just whose game it is.

Consequently "Lego Batman 2: DC Super Heroes" is a fresh addition to the dual dynasty, and will be welcomed by any family out to play games together.

The game contains cartoon action violence and some frightening situations. The Catholic News Service classification is A-I — general patronage. The Entertainment Software Rating board rating is E10+ — everyone 10 and older.