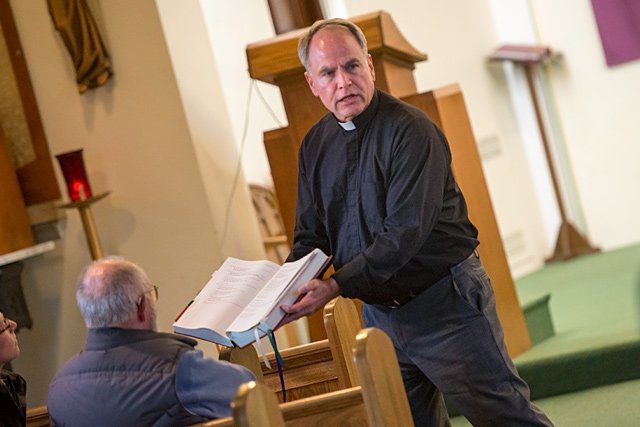 With Holy Week just around the corner, Catholics in the Southern Tier are immersing themselves in spiritual, service and social initiatives denoting the Lenten season.

Among the activities are the following:

• A Forty Days for Life vigil is running through April 9 in Ithaca. All are invited to join in peaceful prayer to end abortion between 7 a.m. and 7 p.m. daily near Planned Parenthood, 620 W. Seneca St.

• Living Stations of the Cross are being presented each Friday at regional locations by youths from Blessed Trinity/St. Patrick parishes in Tioga County. The final presentation is on Good Friday, April 14, at St. Margaret Mary in Apalachin at 7:30 p.m.

• Students of Immaculate Conception School, Ithaca, led a Living Stations of the Cross for the school and parish.

• Hornell’s Knights of Columbus is conducting “40 Cans for Lent” food drives in Our Lady of the Valley Parish, Hornell/Rexville, through Good Friday.

• The cluster of St. Matthew, Livonia, and St. Mary, Honeoye, is hosting soup suppers with prayer on Fridays.

• St. Mary, Bath, is hosting Stations of the Cross, Mass, meal and program on Wednesday evenings.

• A Lenten book study series is taking place at All Saints Parish in Lansing.

• Middle-school students from All Saints Academy in Corning put on a special Stations of the Cross March 3. In addition, the school’s students have sought to recite 1,000 rosaries during Lent for blessings on All Saints Parish. Elsewhere in the parish, a five-part series, “A Biblical Walk Through the Mass,” was held March 20-23 at Immaculate Heart of Mary in Painted Post.

• A Lenten retreat held March 21-23 in the cluster of St. Rose in Lima, St. Agnes in Avon and St. Paul of the Cross in Honeoye Falls featured teaching Masses led by Father Michael Fowler, parochial administrator.

• Faith-formation students from St. Stanislaus, Bradford, put on a free supper in the church hall Feb. 28 in anticipation of Lent.

• St. Catherine of Siena, Ithaca, featured “Teach Us to Pray Day” March 24 during which participants experienced different forms of prayer.