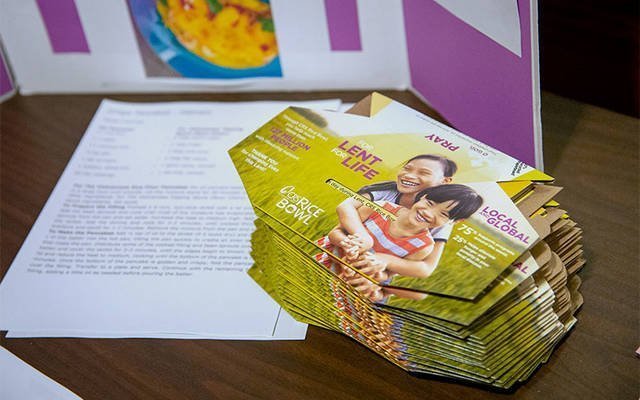 CRS Rice Bowl boxes are ready to be picked up by parishioners of St. Agnes Church in Avon. Funds raised through the Lenten initiative are used to alleviate hunger locally and around the world. (Courier photo by Jeff Witherow)

Are you seeking a Lenten activity that blends the season’s three spiritual pillars of prayer, fasting and almsgiving?

Then CRS Rice Bowl could be an ideal match.

The Rice Bowl initiative, which began Ash Wednesday, Feb. 26, and will conclude Palm Sunday, April 5, strives to alleviate hunger both globally and locally. It is conducted by Catholic Relief Services — the relief and development agency of the U.S. Conference of Catholic Bishops — and takes place in each diocese throughout the country, raising millions of dollars annually. Instituted in 1975 and formerly known as Operation Rice Bowl, the campaign has a strong presence in the Diocese of Rochester, where 71 parishes took part in 2019, according to Kathy Dubel, diocesan CRS Rice Bowl coordinator.

Rice Bowl kits can be obtained either from a participating parish or by ordering from CRS at crsricebowl.org. Serving as the centerpiece of each kit is a cardboard bowl, often placed on a family’s dinner table, in which money — derived from one’s Lenten sacrifice — is placed for donation. The bowl is accompanied by a calendar containing prayerful reflections for each day of Lent along with recipes for meatless meals on Lenten Fridays. Also included is information about recipients of Rice Bowl contributions.

Dubel said that several Diocese of Rochester parishes support the Rice Bowl cause by conducting soup-supper fundraisers as well as international dinners with the provided recipes. She added that young Catholics — either through faith-formation programs, youth groups or Catholic schools — are among the chief supporters of Rice Bowl.

Seventy-five percent of the alms collected from Rice Bowl efforts are sent to CRS to support development and food-related projects in nearly 50 countries around the world. For instance, this year’s Rice Bowl campaign is spotlighting three young girls from Honduras, Vietnam and Kenya, respectively, and detailing how Rice Bowl funds are helping make better lives for them and their families.

The remaining 25 percent of Rice Bowl contributions stay in the local community, supporting hunger-relief efforts within each county from which donations are made. Dubel said that Catholics from the Diocese of Rochester raised a total of $101,221 in 2019, meaning that more than $25,000 went directly toward supporting 50 hunger-relief programs spread throughout the diocese. For example, the Feb. 23 parish bulletin for St. Mary Our Mother in Horseheads reported that more than $900 of last year’s Rice Bowl alms was forwarded to the Horseheads Food Pantry. In addition, the Jan. 26 bulletin for Ss. Isidore and Maria Torribia Parish in central Steuben County noted that 2019 contributions are helping Mustard Seed Ministries, a local volunteer organization that provides food, clothing, household items and emergency financial assistance.

Dubel said that in addition to stressing prayer, fasting and almsgiving, CRS Rice Bowl also strives to impart deeper knowledge about hunger. She noted Rice Bowl’s priority on “connecting global with the local” by reminding donors that hunger is not only a serious issue in developing nations, but for a number of folks at home as well.

“People everywhere struggle to put food on the table,” remarked Dubel, who also serves as justice-and-peace director for Catholic Charities of Chemung/Schuyler.

Through all their Rice Bowl efforts, Dubel said, donors can achieve greater solidarity with the people they support.

“It’s comforting to know that during Lent we’re going to journey with people we’ll never meet. But they know us, because we’ve touched their lives,” she said.

Dubel emphasized that each Rice Bowl donation, whether large or small, makes an important difference.

“It’s like the loaves and fishes,” she said, referring to the Gospel story of Jesus feeding the 5,000. “It’s amazing how a little bits of alms can be multiplied. So, we just rely on the generosity of people and however the Spirit moves them.”

EDITOR’S NOTE: For more information about CRS Rice Bowl, or to make a donation in support of Rice Bowl, visit crsricebowl.org.