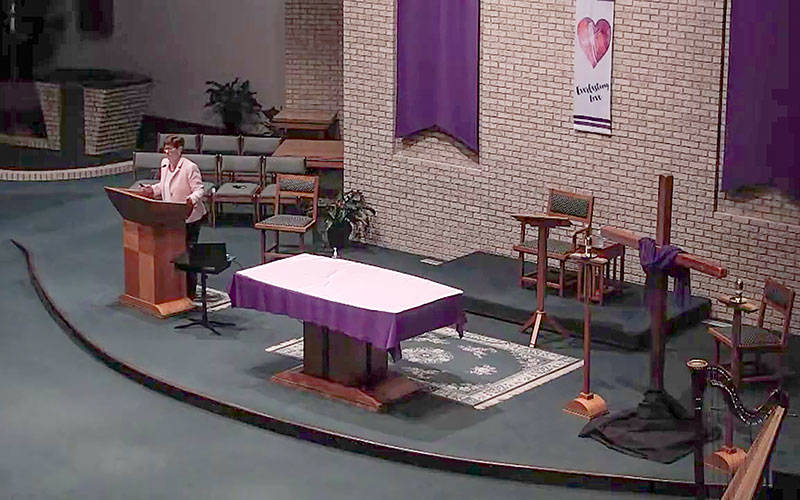 Damian Zynda leads a retreat titled “Prayer and Living in a Post-COVID World” at Church of the Transfiguration in Pittsford March 2. (Courier screenshot via YouTube)

Lent is a time when Catholics traditionally slow down, make sacrifices and spend time in quiet reflection. By those standards, the past 12 months — in which the COVID-19 pandemic forced people throughout the world to stay home, abstain from things they enjoy and spend time alone — have been akin to a very long Lenten season, Damian Zynda recently remarked.

“I think, in my interpretation, we have had a yearlong Lent, and we are exhausted,” Zynda told the Catholic Courier in late March.

Just as Lent gives way each year to Easter and new life, however, there are hopeful signs of the new beginnings a post-COVID world might bring, she said.

As one of the featured speakers for the annual Tri-Parish Lenten retreat of three local parishes, Zynda recently tried to help people start to think about how life might look when the pandemic is finally over. “Praying and living in a post-COVID world” was the theme of the retreat for parishioners of St. Catherine of Siena Parish in Mendon and Church of the Transfiguration and St. Louis parishes, both in Pittsford.

Zynda, who is Transfiguration’s director of spiritual exercises, holds a doctorate in systemic theology and Christian spirituality and has taught at St. Bernard’s School of Theology and Ministry. She and former diocesan liturgy director Father Robert Kennedy spoke during the retreat, which took place at Transfiguration March 2 and 9. Recordings of the livestreamed sessions are available on Transfiguration’s website (www.transfigurationpittsford.org/streaming-services).

Hopefully, Zynda said at the start of the March 2 session, the retreat might help people to “enter perhaps more deeply into the mystery that we have just lived through.” A good place to start, she noted, is the first reading from the first Sunday of Lent, which picks up just after the earth was devastated by a flood and details the covenant God made with Noah and his sons. When God created humans, he entrusted them with the mandate to be stewards of creation, but along the way humanity forgot about that mandate, she said.

“When we look at Noah’s story, we usually see, ‘God got angry,’ but we don’t look at the other side as to why. … It was the anger that came from grief. God’s heart was broken,” she said. “We can identify, … given our own experiences as parents.”

Today, God still weeps for many reasons, including the incredible loss of life due to COVID-19, humans’ abuse of the earth and its resources, and social systems that dehumanize and impoverish people, she said.

“God watched all this and weeps, and so do we, because we are still enough during a time of COVID to listen,” she said. “While COVID has done many awful things and set our lives on very different courses, it really has made us stop. What has been imposed on us is a sabbath … a time to reflect on who we have become and who we choose to be.”

Genesis tells us that after the flood, God changed course and made a covenant with Noah, promising never again to devastate the earth with floodwaters. He did so because he found in Noah a person who was righteous and holy, Zynda said.

“Because of one person’s goodness and love for humanity and creation, God changed God’s mind,” she said. “The rainbow is a symbol of new life, or Easter. The story of Noah is one of Easter because of our awareness of a greater connectedness between God and humanity.”

The “Noahs” of our day may be such people as Pope Francis, the doctors and nurses throughout the world who have cared for others during the pandemic, and Mercy Sister Grace Miller, who cares for Rochester’s homeless, Zynda said.

If God, upon recognizing Noah’s goodness, could change course, then so can we, Zynda added.

“I think COVID-19 has given us the opportunity to reflect on who we are, who we are becoming through this, what changes are happening, and especially to be alert to the changes we may not have noticed, thinking about who we will choose to be after we can be back in each other’s company a little more frequently,” Father Kennedy proposed during the March 9 session.

Pope Francis reflected on this choice in his most recent encyclical, Fratelli Tutti, which means “On Fraternity and Social Friendship,” Father Kennedy said. The Holy Father proposed that Jesus’ parable of the Good Samaritan encourages today’s Catholics to create a culture of encounter that will overcome conflicts and overcome boundaries, he said.

“This is our post-COVID mission … Will we bend down to touch and heal the wounds of others?” Father Kennedy asked. “Our God in the time of COVID is calling us to build a community, a culture that includes, integrates and lifts up the broken, the wounded … every last one of us, no matter who we are, no matter what we’ve done, no matter where we’ve been.”

Christians will gain the strength to carry out this mission from their full, conscious and active participation in the liturgy, the gathered assembly of Christians together, he added. The pertinent question for pastoral leaders thus becomes not how to bring people back to the liturgy after the pandemic, but how to make people understand what is happening in the liturgy, Father Kennedy said.

“As the gathered assembly of the Christian people, that’s what we have to focus on and find there the vision, the pulse beat, of how we will fulfill that mission,” he said.