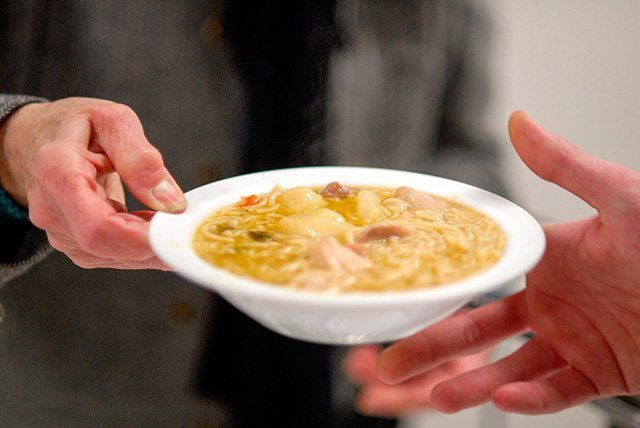 Soup is served at a soup supper and Living Stations of the Cross event at Rochester’s Our Lady of the Americas Church March 4, 2009.

Lent began March 1, which means many parish bulletins and calendars now are packed full of Lenten devotions and programs in addition to the usual parish offerings.

Stations of the Cross and soup suppers are Lenten staples at many parishes, while others each year invite parishioners to participate in retreats and parish missions. Still other parishes and institutions provide opportunities for Catholics to learn about and engage in various types of prayer, such as Taize prayer.

Why do parishes offer so many Lenten opportunities? Catholics typically refocus their prayer lives during Lent and often are looking for something to enrich their spiritual lives, remarked Charlie Gardner, leader of the Emmaus Journey group at Ss. Mary and Matthew Faith Community in Honeoye and Livonia. This group’s mission is to offer opportunities that will help the members of the faith community to deepen and grow in relationship with God and one another, and this year the group planned a Lenten series of Friday-evening soup suppers followed by various prayer experiences.

The weekly soup supper is more than just a simple meal, Gardner noted.

"The simplicity of a meal of soup and bread reminds parishioners to give thanks for the gifts God has given them. When gratitude is given, there is an invitation for Jesus to be present and conversion can occur, deepening the relationship with God and others," he said.

The prayer opportunities offered after each soup supper are varied. One night will feature adoration, for example, while another two separate evenings will focus on the Stations of the Cross. The first stations program will feature the traditional stations paired with corresponding video clips from the 2004 movie "The Passion of the Christ," while the second will feature the more traditional form of the devotion. The Stations of the Cross help people focus their minds on prayer and open themselves up to the suffering Jesus endured as well as their own suffering and intentions, Gardner said.

"When we pray we use our imagination and we entice God to come in and enlighten us about whatever we’re praying for," he said.

Lenten devotions and practices help focus Catholics’ attention on prayer, agreed Donna Walker, pastoral associate at St. Kateri Parish in Irondequoit. Basilian Father Norm Tanck, former pastor of St. Kateri, frequently used to say that people sin in public, so they should seek forgiveness in public as well, she said, and that philosophy may explain why Ash Wednesday Masses are usually so crowded.

"That whole liturgy is a visual reminder of our Catholicism, our humanness, our need for Christ’s mercy," Walker said.

This year, St. Kateri Parish will follow up its Ash Wednesday services on March 1 with a Day of Prayer on March 3. That day, the Mary Chapel at Christ the King Church will be open for eucharistic adoration between 7 a.m. and 9 p.m., and people are invited to spend some time in prayer before the Blessed Sacrament, Walker said.

"Come for as long as you want or as little as you want," she said. "We also invited our homebound and people who are working and can’t get there to pray where they are and join in this special prayer."

The parish planned this day of prayer to correspond with its Lenten theme of "Responding With Christ In Our Hearts." Another key component of St. Kateri’s Lenten offerings is its slate of service projects. The parish has scheduled times for parishioners to help with projects at such local places as Bethany House, Foodlink, the Irondequoit Community Cupboard and St. Ann’s Community, and parishioners may sign up to fill the 350 volunteer slots. All of the volunteer opportunities will begin after the parish’s day of prayer, and those interested in participating in the service component are encouraged to participate in the prayer component as well, Walker said.

"(After adoration), we’ve got Christ in our hearts. With the fullness of Christ in our heart, we’re inviting people to consider ways of serving those in the community," she explained. "Show up and do whatever it is you can, but do it prayerfully, not just for the good works, but recognizing that Christ in your heart."

Catholics sometimes are more likely to sign up for service or prayer offerings during Lent because they’re looking for a way to actively recognize and live out their faith during the penitential season, noted Mercy Sister Laurie Orman, vocations minister for the Sisters of Mercy of Rochester.

"Lent is not all about what you give up. It’s what you do during Lent. What’s something that you might be able to do differently during Lent?" she remarked.

One such option is Taize prayer. The local Sisters of Mercy offer an evening of Taize prayer once a month, and Sister Orman expected the March 26 evening –which will begin at 6 p.m at the Mercy Center, 1437 Blossom Road in Brighton — may attract more people than usual. Taize prayer utilizes repetition as well as periods of music, Scripture and quiet time to help participants disconnect from the pressures and worries of their lives and focus on prayer.

"It’s really about going and taking that hour and just being present," Sister Orman said.