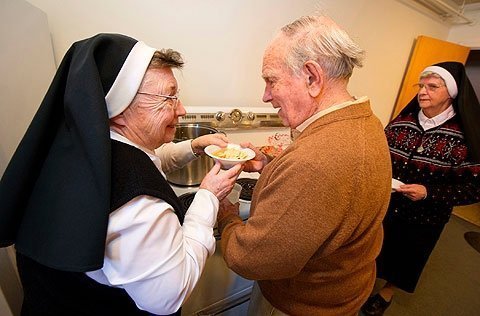 Sister Raymond Joseph (left) serves a bowl of her chicken noodle soup to Howard J. Fisher March 7 during one of the Lenten "Soup and Scripture" luncheons held at St. Mary Church in Elmira.

Lent calls us to go the extra mile, to stretch repeatedly beyond our normal faith practices. Thanks to offerings from Southern Tier parishes, bundles of opportunities have existed to help achieve this ideal.

Activities in the Tier this past Lenten season have included:

The Unity Council of Churches, with a theme of the sacraments, rotated its weekly parish retreat among its planning group (St. Rose, Lima/St. Agnes, Avon/St. Matthew, Livonia/St. Mary, Honeoye/St. Paul of the Cross, Honeoye Falls).

On March 14 at Immaculate Heart of Mary, Painted Post, Deacon Raymond Defendorf spoke on his trips to the Holy Land.

An ecumenical program, "My Favorite Prayer," took place on Mondays at Our Lady of Lourdes, Elmira, with a Vespers service, speaker and soup supper. The church also hosted a women’s afternoon of reflection, "Opening the Door of Our Hearts," on March 18 that included prayer, meditation, music, talks and a simple supper.

The cluster of St. Mary, Bath/St. Gabriel, Hammondsport, held Wednesday Stations of the Cross followed by Mass, a simple meal, and a program on Christianity and Catholicism. St. Gabriel also took part in Wednesday midday services and luncheons with area churches, serving as host March 28.

* Study/discussion. A DVD Lenten series took place on Tuesday mornings at St. Matthew, Livonia. In addition, St. Matthew held a discussion series based on "This I Believe," a collection of the personal philosophies and credos of remarkable men and women; as well as discussion sessions about employment on Mondays.

A "Rise and Shine" series was held Sunday mornings at St. Charles Borromeo, Elmira, with discussion of the book Journey Into Light by Sister Joan Chittister, OSB.

St. Catherine of Siena, Ithaca, offered a series "Meeting Christ in Prayer" throughout and after Lent, as well as discussion March 4 on John Allen’s book, The Future Church: Trends Revolutionizing the Church.

St. Ann, Hornell, hosted a one-hour forum each Thursday about various aspects of our faith.

* Prayer/charity. Living Stations of the Cross have been performed weekly by Blessed Trinity/St. Patrick youths, with the finale set for Good Friday, April 6, at St. Margaret Mary, Apalachin, at 7:30 p.m.

The Divine Mercy Chaplet was prayed at St. Casimir, Elmira, before 7 a.m. Masses.

St. Joseph, Campbell, erected a Lenten prayer banner placed near the statue of the Blessed Mother, with written intentions being placed on it.

Forty Days for Life, a prayerful effort for an end to abortion involving many area churches and denominations, took place outside Ithaca Planned Parenthood Feb. 22-April 1.