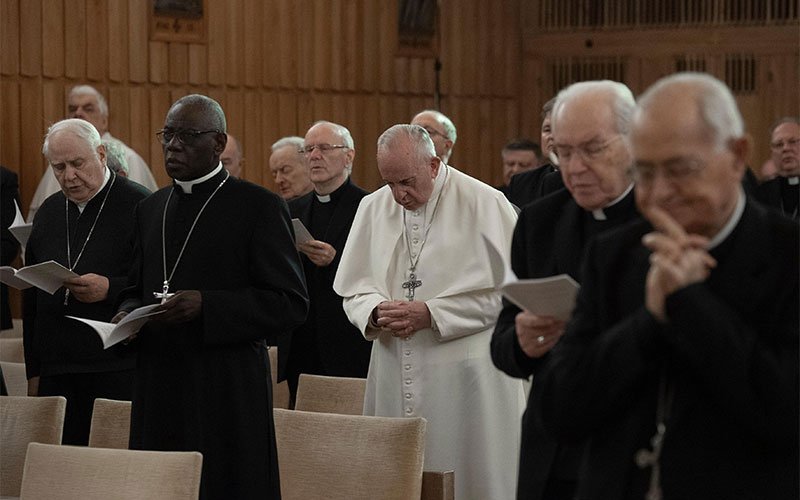 Pope Francis prays during his Lenten spiritual exercises in Ariccia, south of Rome in this March 15, 2019, file photo. The annual Lenten retreat for the pope and top Vatican officials has been canceled because of the ongoing pandemic. (CNS photo by Vatican Media)

VATICAN CITY (CNS) — The pope’s annual Lenten retreat with Roman Curia officials has been canceled because of the ongoing COVID-19 pandemic, the Vatican said.

However, Pope Francis has invited those who normally participate in the retreat — cardinals living in Rome and the heads of Vatican offices — to arrange for their own personal retreat in prayer, said a written communique from the Vatican press office Jan. 20.

Given the ongoing health emergency, it said, it will not be possible this year for officials to come together for the spiritual exercises at the Pauline Fathers’ retreat and conference center in Ariccia, a town about 20 miles southeast of Rome.

The week set aside for each person to arrange for his own retreat will be from the afternoon of Feb. 21 to Feb. 26. Pope Francis will follow the same schedule, which means he will not have any appointments that week including no general audience Feb. 24.

Last year, Pope Francis did not attend the Lenten retreat because he was recovering from a mild cold. Instead, he followed the meditations from his residence, spiritually joining the curia and doing spiritual exercises at home.