Let Me In - Catholic Courier 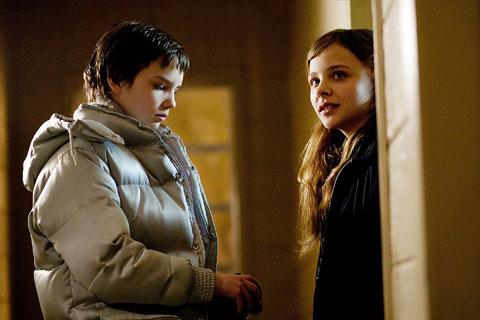 NEW YORK (CNS) — Given its serious treatment of themes such as isolation and the psychological roots of violence, writer-director Matt Reeves’ macabre yet strangely moving twist on vampire lore, "Let Me In" (Overture), is not a work to be easily dismissed.

But this screen version of Swedish novelist John Ajvide Lindqvist’s best-seller "Let The Right One In" — preceded by a 2008 Swedish film adaptation of the same title — becomes, at times, far too gruesome to justify endorsement for viewers of any age.

That’s a shame because the intent here is clearly far from exploitative. Instead this production — the first in three decades from the long-dormant British studio Hammer Films — sets out to tell a tale of heartfelt, though unlikely, puppy love between two preteens desperately in need of human connection.

The first of these we encounter is 12-year-old Owen (Kodi Smit-McPhee). Bullied and lonely, Owen is also coping with the emotional damage wrought by his parents’ acrimonious separation and impending divorce, and with his sense of alienation from his gritty, unwelcoming surroundings in 1983 Los Alamos, N.M.

So when he meets new neighbor and apparently kindred soul Abby (Chloe Grace Moretz), Owen rapidly develops a friendly crush. But his hopes for breaking the spell of his solitude are more than a little impaired by his gradual discovery that Abby is not exactly your average girl-next-door and that the mysterious guardian Owen takes to be her father (Richard Jenkins) is connected to a spate of recent murders.

As it reveals the dark identity lurking behind its young heroine’s appealing facade, the script explores the parallels between her metaphysical plight and Owen’s down-to-earth and all-too-common difficulties.

But in juxtaposing the two sides of Abby’s strange persona, and in uncovering the nature of her relationship with Jenkins’ unnamed character, the oblique approach to disturbing events that bolsters the opening scenes gives way to a level of splatter typical of far less imaginative offerings in the genre.

The script’s philosophical approach to the use of violence is initially more in keeping with Christian morality. Thus, although Abby advises Owen to strike back against his pummeling schoolboy persecutors, the consequences when he does — lashing out disproportionately and dangerously — only demonstrate the futility of meeting evil with evil.

Later scenes that see the pair teaming up to protect each other by physical means, however, undercut this point, appealing simultaneously to viewers’ sympathy and their baser instincts.

While the bond between Owen and Abby is mostly expressed in an age appropriate manner — we see Owen receive what is obviously his first kiss — there is an unnecessarily edgy scene in which Abby disrobes while Owen keeps his eyes closed and the duo then share a bed, though this proximity leads to nothing.

Owen also indulges his sexual curiosity in an unpleasant way, first spying on the couple who live opposite by the use of a telescope, and later peeking at Abby from behind as she gets dressed after a shower.

More fundamentally, Owen eventually makes a far reaching moral choice that, while rooted in his genuine affection for the uniquely vulnerable Abby, would nonetheless be wholly unacceptable within the context of real life.

The film contains much gory violence, a scene of voyeurism with brief graphic sexual activity and fleeting upper female nudity, about a half-dozen uses of profanity as well as some rough and a few crude and crass terms. The Catholic News Service classification is O — morally offensive. The Motion Picture Association of America rating is R — restricted. Under 17 requires accompanying parent or adult guardian.

Mulderig is on the staff of Catholic News Service. More reviews are available online at www.usccb.org/movies.
– – –