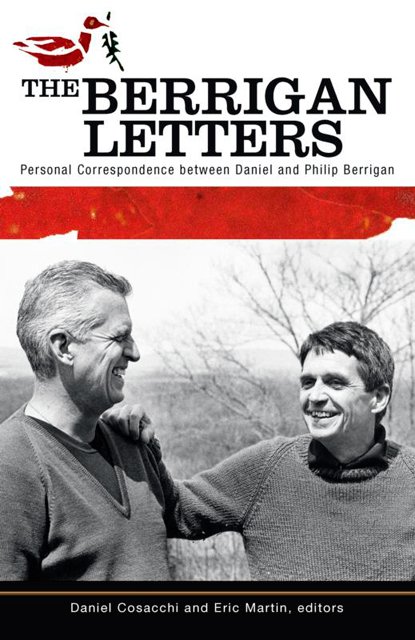 This is the cover of "The Berrigan Letters: Personal Correspondence Between Daniel and Philip Berrigan," edited by Daniel Cosacchi and Eric Martin. The book is reviewed by Kathleen Finley.
"The Berrigan Letters: Personal Correspondence Between Daniel and Philip Berrigan," edited by Daniel Cosacchi and Eric Martin. Orbis Books (Maryknoll, New York, 2016). 340 pp., $30.
Imagine St. Paul, Isaiah or Jeremiah — any key prophetic figure — with a brother or close companion, one who could be a support and encouragement at times when life got rough. Whether or not you see Phil and Dan Berrigan, one who was a Josephite priest and later married and the other a Jesuit priest, as prophetic against the politics of war in the last half of the 20th century or not, watching their relationship and lives unfold through their letters to each other shows two men trying to be faithful to the Gospel and to each other.
Their letters, begun to their mother as she expected them to keep in touch each week, trace the considerable arc from before the attack at Pearl Harbor to just after the 9/11 attacks and Phil’s death in 2002. Their missives, often written from jail or prison for one or both of them and delayed at times because of censors there, chart a development as well as a constancy in their thinking.
In 1943, for example, Dan, already in the Jesuits for several years, encourages Phil in his role and vocation as a soldier; he served with the Air Force in Europe during World War II. By the early 1960s or before, they were each aware of the moral challenges presented by the civil rights struggle, apartheid in South Africa and the increasing war in Vietnam.
These events brought these reluctant prophets closer to the process of civil disobedience. Phil commented after they met with Thomas Merton and then helped the Rev. Martin Luther King Jr. in the march from Selma to Montgomery, Alabama: "We stepped out of rhetoric into the realm of action, and the realm of consequence."
By the late ’60s, both brothers became involved in a number of sit-ins and demonstrations, as well as a number of protests involving a symbolic pouring of blood on draft files and destruction of equipment on military installations — methods without the destruction of life to bring attention to what they considered to be immoral actions on the part of the government. Each spent time incarcerated, Philip probably for more time through the years.
Throughout times of turmoil and pressures from civil and religious superiors, they were clearly sources of support and affirmation for one another, always done in a context of faith.
At one point, Phil comments to Dan, "You’ve meant the church to me at its best and noblest." At another point, Dan writes to Phil and his wife Liz, "I can only think of … you, my heart’s dearest, (as) a sense that lies on all my life like Christ’s own hand blessing me every day and hour. Sometimes I think of all of us in the ‘great ring of pure and endless light.’ This is as far from BS as I can get, whether at prayer or in this letter. We bless one another, in trying to live the way we do." And, most of the time, both brothers’ letters would be signed "in Christ" or "in the peace of Christ."
They did occasionally disagree, which is encouraging for the rest of us with siblings to see, but overall the two brothers shared a deep love for each other and for the status-quo-challenging Jesus they had chosen to follow. This collection of their letters gives us a privileged look at an important time in the American church.
– – –
Finley is the author of several books on practical spirituality, including "The Liturgy of Motherhood: Moments of Grace" and "Savoring God: Praying With All Our Senses," and taught for many years in the religious studies department at Gonzaga University in Spokane, Washington.
Copyright © 2022 Catholic Courier, Inc. All rights reserved. Linking is encouraged, but republishing or redistributing, including by framing or similar means, without the publisher's prior written permission is prohibited.