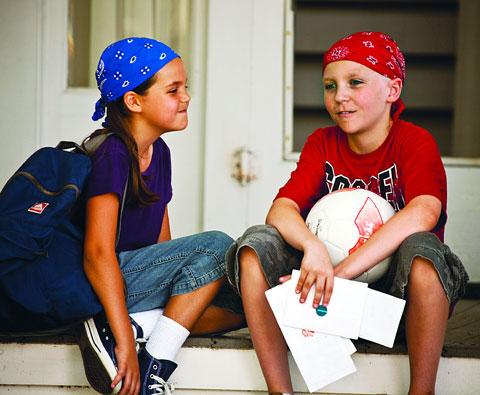 NEW YORK (CNS) — Though its underlying theology is evangelical, Catholic viewers — and Christian believers of every stripe — will welcome the inspirational and touching drama "Letters to God" (Vivendi). That’s because director David Nixon’s family-friendly tale of courage and conversion celebrates the power of Gospel values to transform lives in a way that transcends denominational divides.

Based on real events, this is the story of Tyler Doherty (ably and endearingly played by Tanner Maguire), a faith-filled 8-year-old boy stricken with brain cancer. Tyler’s favored method of praying — and of reflecting on his struggles — is to write letters to the Almighty, describing daily events and asking for favors in the kind of chatty tone one might use with a close friend.

But Tyler doesn’t just put pen to paper, he also mails his notes, addressed simply "To God, From Tyler."

Initially, this befuddles Brady McDaniels (Jeffrey S. Johnson), the postman who has just taken over the local route in Tyler’s Norman Rockwell-esque hometown. Depressed over his recent divorce –and a potentially disastrous mistake that cost him visiting rights with his young son — war vet Brady leads a squalid, solitary life, drinking to excess by night and barely holding on to his job by day.

Still, Brady’s unwilling to trash Tyler’s correspondence or even drop the envelopes into the dead letter box. Eventually he tries to leave them in a local church, but he’s interrupted by the pastor (L. Derek Leonidoff) who insists that Brady keep the missives, since God must have had a reason for choosing him to receive them in the first place.

As Brady gradually befriends Tyler and his family — which includes widowed, overtaxed mom Maddy (Robyn Lively), devout grandmother Olivia (Maree Cheatham) and teen brother Ben (Michael Christopher Bolten), who’s emotionally conflicted over Tyler’s illness — he finds the lad’s innocent piety and against-the-odds optimism, (expressed both in person and through those messages to God which Brady has by now begun to read), subtly wearing away at his own cynicism.

The only noticeable divergence from Catholic teaching comes late in the script — developed by Sandra Thrift from an original draft by co-director Patrick Doughtie, father of the real youngster on whom Tyler’s character is modeled — when Tyler’s perky best friend Samantha (Bailee Madison) expresses the assurance, rather than the trusting hope, that her acceptance of Jesus into her heart will lead her to eternal life.

There are also hints that Brady and Maddy’s friendship may develop into something deeper; Tyler prays, in one of his letters, for God to send his mother someone who will relieve her loneliness. But this remains only a vague possibility by the time the credits roll, so the issue of a morally troublesome second marriage for Brady never really arises.

While the inclusion of the mature subjects listed below make this unsuitable entertainment for the youngest viewers, objectionable material of any kind is entirely absent from this heartwarming look at the infectious faith of a young man who, despite the ravages of a potentially terminal illness, continued to treat God as his pen pal.

The film contains themes of life-threatening illness, divorce and alcoholism. The USCCB Office for Film & Broadcasting classification is A-II — adults and adolescents. The Motion Picture Association of America rating is PG — parental guidance suggested. Some material may not be suitable for children.