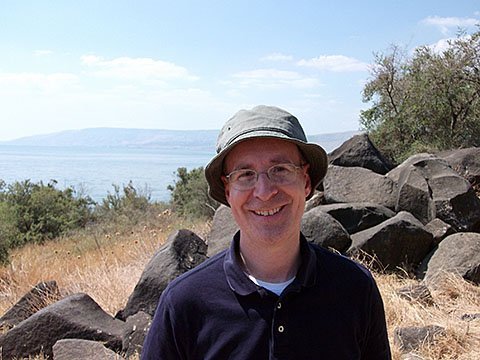 Jesuit Father James Martin is pictured in 2011 by the "Bay of Parables" at the Sea of Galilee. The priest, a popular author and editor at large of America, the Jesuits' national magazine, told Catholic News Service in an interview he has a hard time believing that he initially turned down a suggestion to go to Jerusalem as source material for his newest book, "Jesus: A Pilgrimage."

WASHINGTON (CNS) — Jesuit Father James Martin today has a hard time believing that he initially turned down a suggestion to go to Jerusalem as source material for his newest book, "Jesus: A Pilgrimage."

"Initially, I didn’t want to go because I thought my own mental images of Gospel passages and stories that I’d prayed over for years and years would be supplanted by touristy locales," Father Martin said.

But in heeding a fellow Jesuit’s advice, Father Martin discovered his Jerusalem visit "provided a great structure for the book: a little narrative, a little scriptural exegesis and some reflections."

In a telephone interview with Catholic News Service prior to the book’s March 11 release, Father Martin said the trip "informed and deepened the book in a way I never anticipated. There were some profound spiritual experiences there."

One of those was his visit to the Bay of Parables. "Seeing rocky ground, fertile ground and thorns, and remembering Jesus was talking in parables. He was probably saying, ‘Look at those thorns there, look at those rocks there.’

"The trip was life-changing, frankly."

Father Martin’s aim in writing "Jesus: A Pilgrimage" was "to combine the Jesus of history with the Christ of faith, which you don’t often find put together in one book."

He learned that the elements are not often found in the same book for a reason: It’s a lot of work. "Certainly the easiest parts (to write) were the pilgrimage narratives. Except for few glances at a map, that was pure narrative," Father Martin said. "The spirituality (part), I was looking through my retreat journals, hoping that I was communicating helpful insights. The biblical exegesis was the most work; I was hoping that I had the most current biblical scholarship. I sent the book to 10-15 biblical scholars to make sure that every jot and tittle was correct."

Father Martin said some dimensions of Jesus’ life and ministry revealed themselves to him in new ways as a result of the trip. "For one thing, the close confines in which he worked along the Sea of Galilee, where he walked among the crowds, the crowds pressing in on him. The towns were close by one another. It’s easy to imagine him being pressed by the crowds, and wanting to get away from the crowds," he told CNS.

At the same time, the priest said he was struck by "how far apart some of these towns are. When it says Jesus and his disciples traveled to Jericho, that’s one line (of Gospel text). It took several days. It shows the strenuousness of his ministry."

Father Martin recalled celebrating Mass one time in Jerusalem when "I looked at the host, and said, ‘Take this, all of you, and eat of this. This is my body.’ I thought of Jesus taking his body to all these places. … He took his body to the people in these places. The physicality … was really driven home."

He added he learned something about himself as well in the writing of his experiences in Jerusalem. "The way that grace works in writing. When I was writing a particular chapter I could feel myself growing more and more enthusiastic and focused. I’d feel more enthusiastic about the topic and I got more into it. God was drawing me more and more into the topic. That was a grace," Father Martin said.

"And, as I was finishing the book, I could feel the graces withdraw. I don’t know if I could do the book now," he added. "For example, I remember writing the chapter on Nazareth, looking at the best available Jesus scholarship on what life in Nazareth was like for a few months. When I finished the chapter, I thought, ‘I’m not interested in that anymore.’ And that was the working of grace."

Even so, "I want to say this is the most enjoyable book I’ve written yet," Father Martin said. It was like a dream come true for me. I was sorry when the project ended."

He also got to read the book in a studio for an 18-hour audiobook version of "Jesus: A Pilgrimage." "I never wanted to sound like Gregory Peck so much in my entire life," he joked.

It’s been "super cool," according to Father Martin, to be a Jesuit over the past year, with Pope Francis, himself a Jesuit, occupying the chair of Peter. "I love Pope Francis for who he is and what he’s said and what he’s done, but it’s also a source of great joy to see a Jesuit ask people to taste the riches of Ignatian spirituality and the Jesuit tradition, being invited to pray in Ignatian ways, being a contemplative in action," he said. "So I can’t get enough."

It’s been pretty nice as well being Jesuit Father James Martin: author, editor, intermittent commentator on CNN and chaplain to "The Colbert Report." He also is editor at large of America magazine, which is published by the Jesuits.

"I love being a Jesuit," he said. "Without a doubt, my Jesuit vocation is the greatest gift of my life. I know it was the best decision I ever made. I also enjoy my work at America a great deal, too. How great an opportunity to write a book about Jesus, too.

"I can’t think of anything more satisfying — except meeting him at the end of my life."