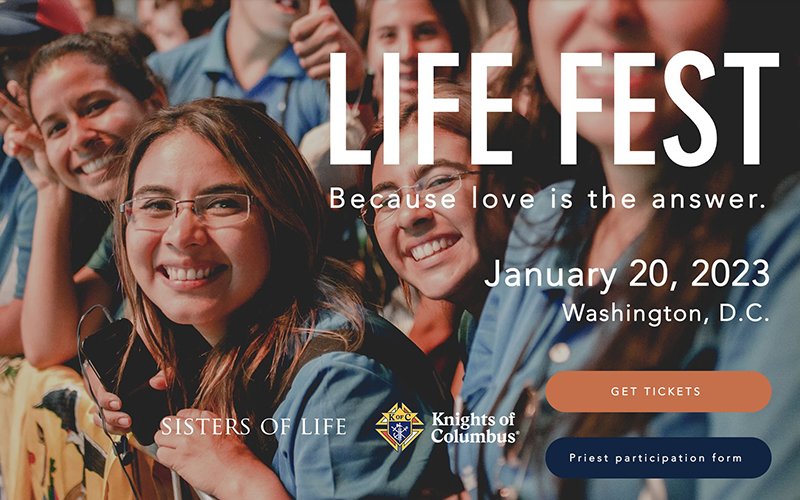 The Sisters of Life and the Knights of Columbus are sponsoring Life Fest Jan. 20, 2023, a new event to mark the anniversary of Roe v. Wade. The three-hour rally will take place at the 4,200-seat Entertainment & Sports Arena in Washington ahead of the national March for Life. (OSV News photo/courtesy Life Fest)

(OSV News) — Driving to Washington for a morning rally ahead of the 2023 March for Life, Pete and Tricia DeMaio did something unusual for a family road trip: they decided upon names for the two children that the couple — high school and college sweethearts — had lost to abortion prior to their marriage.

Selecting the names was a family decision, made by the DeMaios and their seven surviving children, who suggested Raphael (after the archangel and patron of healing) and Maria (for St. Maria Goretti, a patron of forgiveness).

“Now those two babies have a name,” Pete DeMaio, a Philadelphia-area businessman and pro-life advocate, told those gathered at the first-ever Life Fest, which took place Jan. 20 at the Entertainment & Sports Arena in Washington’s Congress Heights neighborhood.

More than 4,000 teens and young adults in attendance

Sponsored by the Sisters of Life and the Knights of Columbus, the morning gathering drew some 4,200 people — most of them teens and young adults — for a program of prayer, worship music, and personal testimonies that concluded with Eucharistic adoration and Mass.

Along with the DeMaios, Life Fest featured attorney David Scotton, who discussed his experiences as an adopted child detailed in the documentary “I Lived on Parker Avenue,” singer-songwriter Sarah Kroger, Franciscan Friar of the Renewal Brother Isaiah, and Sister of Life Mary Casey.

Celebrating the gift of life is essential

Sister of Life Mariae Agnus Dei told OSV News her congregation created the event after realizing that “a number of other events and youth rallies were not going to be taking place” around the time of this year’s National March for Life in Washington, the first following the U.S. Supreme Court’s reversal of Roe v. Wade in June 2022 with the Dobbs v. Jackson Women’s Health Organization decision.

Yet although “the law has changed … hearts (still) need to change toward advancing a culture of life in this nation,” said Sister Mariae. “Some of the biggest battles are in front of us.”

Celebrating “the gift of life and the beauty of the human person” is essential to that task, she said.

“Here we are, just focusing and recognizing that love is the answer as we move into this new era, as we usher in this new time,” rally emcee and fellow Sister of Life Bethany Madonna, told Life Fest attendees.

Regardless of the circumstances surrounding one’s conception, each human being is divinely willed into existence, she said.

“There was a moment when God said, ‘Not another moment without you. I call you to be,'” said Sister Bethany. “Nothing about you is a mistake. You are always wanted.”

That message resonated with attendees who spoke with OSV News.

Cecilia Howell, a student at Pius X High School in Lincoln, Nebraska, said she was delighted to see “so many happy faces” celebrating the post-Roe chapter of the pro-life movement.

Katie Nichols, a junior at Bishop Machebeuf High School in Denver, Colorado, said she was impressed by “how much love there is throughout the community right now. Instead of everybody throwing shame, throwing hate, it’s more of a refocusing to spread the love of life.”

Following Life Fest, attendees made their way to the National Mall to join the 50th March for Life.

– – –
Gina Christian is a national reporter for OSV News. Contributing to this report was Father Patrick Briscoe, OP, in Washington.