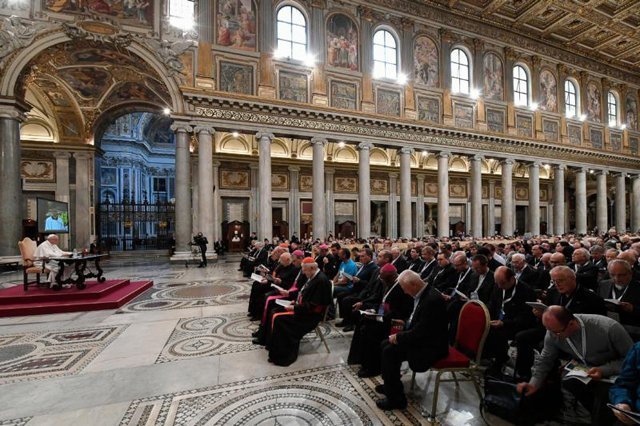 Pope Francis delivers a talk during a retreat for priests at the Basilica of St. Mary Major in Rome June 2.

VATICAN CITY (CNS) — Mercy recognizes that life is short and that so much good needs to be done that there is no time to waste in making amends, Pope Francis told priests.

"That is why it is so important to forgive completely" and let go of paralyzing self-pity so mercy can get "its hands dirty" and make reparation for the wrongs committed, he said in a retreat for clergy.

To help priests and seminarians better understand the proper role mercy must play in their lives and ministry, Pope Francis led thousands of men on a spiritual retreat in Rome. The aim, he said, was for priests to be ready to receive mercy in order to show it even more.

Over the course of the day June 2, the pope led three separate meditations — each nearly an hour long — in three of Rome’s four basilicas: St. John Lateran, St. Mary Major and St. Paul Outside the Walls. Live video links let clergy follow the readings and reflections from different locations.

Introducing how his Ignatian-inspired spiritual exercises would work, the Jesuit pope apologized for "the family endorsement." He said guiding personal prayer with Ignatian spirituality allows people "to feel and savor the things of God" deep within themselves. Action and conversion are spurred, he said, by first feeling and being moved by what God is saying or showing.

Sitting behind a simple wooden desk, supplied with a small bottle of water and a glass, the pope presented his first meditation in St. John Lateran, which hosted Rome diocesan and religious priests and seminarians and those working in the Roman Curia.

Through the use of many vivid examples and personal, colorful anecdotes, Pope Francis said because God’s love and mercy are limitless, priests must ask what barren and parched places are most in need of this life-giving water. "What are the wounds that need this precious balm? What is the sense of abandonment that cries out for loving attention?"

He explained that moving from estrangement to embrace starts with a clear recognition of one’s own sins and the feeling of shame and embarrassment, which lead to a heartsick sense of "nostalgia," which compels the straying child to return back to the house of the father.

Referring to the parable of the prodigal son, the pope said when the son returned home, the father restored the young man’s dignity, despite his sinful nature.

The contradictory feeling of shame and embarrassment can hit priests "when the people kiss our hands and we look at our own most intimate miseries and we are honored by the people of God," he said.

"That is how we have to see ourselves: poised between our utter shame and our sublime dignity;" sinful and selfish, yet cleansed and chosen to feed God’s sheep and multiply his graces.

"Only mercy makes this situation bearable" in keeping the two extremes in balance, he said, and it triggers the desire to make amends.

Speaking off-the-cuff, the pope said priests have to be careful with how they speak and never refer to individual people as "a case."

"Without realizing it, we might say: ‘I have a case …’ I’m sorry, (but you mean) ‘I have a person …’ And this is very clerical," he said, admitting "it has even happened to me often."

Such language separates the pastor from the person so "they don’t touch me and I don’t dirty my hands. And then I do a ‘clean,’ ‘elegant’ pastoral ministry where I don’t risk anything."

At noon, the pope went to St. Mary Major, where he laid red roses and prayed before the basilica’s famous Marian icon "Salus Populi Romani" (health of the Roman people).

There, Italian priests and seminarians from outside of Rome reflected on turning to Mary for the courage to imitate her. Mary shows people "the only power capable of winning human hearts is the tenderness of God," Pope Francis said. Mary creates a place that is "inviting, not at all like a tribunal or an office."

"Unless we can see into people’s suffering and recognize their needs, we will have nothing to offer them," the pope said.

The pope told the priests that "almost all the great saints were great sinners" or they had the humility to see "it was by sheer grace" that they avoided the worst of sins.

Contributing to this story was Junno Arocho.