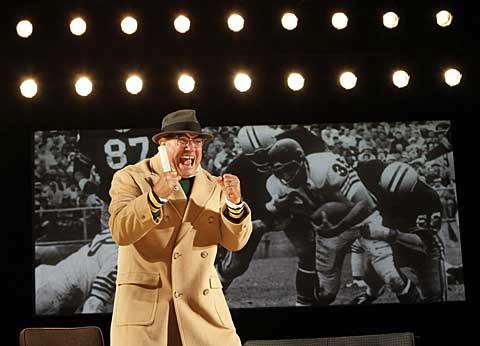 Dan Lauria stars in the Broadway production of "Lombardi," opening Oct. 21 at the Circle in the Square Theatre in New York. The actor brings to the stage the famed coach's deep Catholic faith and his determination to excel.

He also shares Lombardi’s Italian-American heritage, his birthplace, Brooklyn, and for extra measure, he has even played and coached some football himself.

But he admits that what he really shares with the legendary Green Bay Packers coach he portrays in the Broadway production "Lombardi," set to open Oct. 21 at the Circle in the Square Theatre, is his attention to detail and his single-minded determination to excel.

Produced by Tony Ponturo and Fran Kirmser, "Lombardi" is directed by Tony Award-winner Thomas Kail ("In the Heights") and written by Oscar winner Eric Simonson. It is based on David Maraniss’ 1999 Lombardi biography, When Pride Still Mattered. The NFL is a producing partner.

"I’m a little obsessive about acting," Lauria acknowledged during an interview with Catholic New York, the archdiocesan newspaper, at the play’s rehearsal space at City Center.

Lauria is best known for his role as the upright dad on TV’s "The Wonder Years." In the play, Judith Light (from TV’s "Who’s The Boss?") plays his wife, Marie.

"There’s a line that was in the play. It’s not in the play now and I miss it," Lauria said. "Some young reporter called Coach Lombardi a fanatic, and he looked him in the eye and said, ‘Kid, if I have a heart attack right now, call a fanatical doctor.’ That’s Coach Lombardi."

And to a degree that’s Lauria, too.

"That’s the price you have to pay to be that good," he said. "I think I knew that. But it’s just been reinforced. Being an actor, I’ve never been to Europe. I’ve never taken a vacation. I don’t have a family. Is the sacrifice worth it? I don’t know. But most of the guys I went to school with are retired and I’m going to Broadway, so it depends on how you look at it. I think Vince Lombardi would approve."

Lauria’s attention to detail included reading and researching everything he could on Lombardi (whose five championships included two Super Bowl wins); talking to former players and people who knew the coach personally; and poring over reams of photos and video footage to pick up subtle Lombardi gestures.

He also has his own personal memory of Lombardi to draw on. He once met the legendary coach as a teenager growing up in Lindenhurst on Long Island. Lauria, a star linebacker on his high-school team, was in a group of players who received a trophy from Lombardi in the early 1960s.

"We were totally in awe of the man — because you’ve got to remember — we were Italians from Long Island," he said. "We knew who Lombardi was before he went to Green Bay, before he won the championships."

Lauria was recruited by Southern Connecticut State University to play football. During spring football practice his junior year, he was recruited by someone else who apparently saw something not related to gridiron prowess in him, and she set him on the acting path.

Vince Lombardi was a man of immense faith and that part of him is explored in the play. At 15, he entered Cathedral College of the Immaculate Conception in Brooklyn to study for the priesthood.

Deciding on a different life path two years later, he transferred to St. Francis Preparatory where he starred as a fullback. Upon graduation he attended Fordham University where he was a member of Fordham’s famed "Seven Blocks of Granite" offensive line.

His Catholicism stayed with him throughout his lifetime. In Green Bay, he attended Mass virtually every morning at 7 a.m. before going to practice at Lambeau Field.

But Lauria said Lombardi didn’t wear his religion on his sleeve.

"He was a very devout Catholic, always carried a rosary in his pocket," said Lauria, who is not Catholic. "But he never pulled it out during a game. That wasn’t part of his psyche. He wasn’t praying to win. That wouldn’t even enter his mind. He didn’t lead pep talks with prayers. He felt spiritual things were beyond that. He knew he had a very bad temper. He prayed for patience and understanding.

"He didn’t have much patience and, boy, could he fly off the handle," the actor continued. "But he had this amazing ability, and I think it’s very Italian and very Catholic; he could rip into you one minute and 10 minutes later you would hug him. We try to re-create that in the play."

Lombardi’s single-mindedness had an effect on his family life and that also is dealt with in the play. As Mrs. Lombardi, Light "makes it very apparent to the women in the audience what you give up to be married to a man like that," Lauria said.

Would Lauria the football player like to have played for Lombardi?

"Sure," he responded without hesitation. "Being an old football player and a Marine, I would have liked to have played for him."