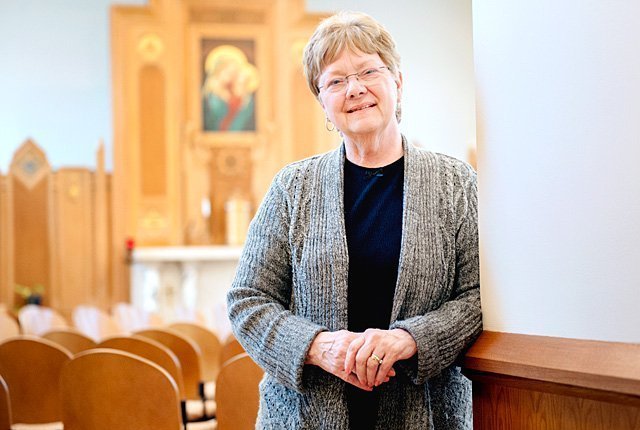 Sandy Grocki, a longtime advocate for priests, will retire from her position as diocesan clergy services coordinator effective April 7.

GATES — In a 2003 Catholic Courier letter to the editor, the late Father Gerald T. O’Connor made public what this diocese’s clergy had already known for years about Sandy Grocki.

“Sandy has been a lifesaver for many active and retired priests,” Father O’Connor wrote.

Through her position as diocesan clergy services coordinator, Grocki has been the go-to person for priests in a variety of areas: medical, financial, housing, insurance, disability, retirement, visas and sacramental coverage. She will soon step down from her many responsibilities, having announced her retirement effective April 7.

“The 25 years just flew by, because I enjoyed it,” she said.

Grocki’s tenure at the diocesan Pastoral Center began in 1988 with the Courier, where she performed a variety of office duties. Nearly one year later she moved into a newly created diocesan position serving as an advocate for priests, particularly retired ones, in matters involving housing, Medicare and Social Security. Over the years she became a welcome link in connecting clergy with programs and agencies.

“She really developed an incredible trust and confidence between her and the priests,” said Bernard Grizard, diocesan director of the Department of Parish and Clergy Services. “They would ask her advice, send her the paperwork saying, ‘I don’t know what to do with this.'”

“Any priest who has had health problems or health-insurance problems would testify to her concern, knowledge and contacts in helping resolve those problems,” Father O’Connor wrote in 2003, noting that “over the past 10 years I have had serious health problems and Sandy’s help has been invaluable.”

Grocki’s duties expanded as time went on. For instance, she became actively involved in assisting the growing number of international priests, particularly in securing visas.

“I really got to know them and their issues as they came here,” she said.

She also grew to spend considerable time arranging sacramental coverage when parish priests were sick, on vacation or otherwise unavailable — often scrambling at the last minute in an effort to ensure that congregations would have Mass. Grocki noted that many priests have her home phone number and were free to call whenever they needed anything. She also has gone out of her way to check up on priests — not so much in a business sense, but more like a close friend or family member.

“I’ll tell you, as soon as I got to know them, it was not a job. They were my fathers, uncles, brothers, cousins,” she said.

She has readily lent support to clergy facing all kinds of difficulties: “God’s got a big job to judge people. I don’t want to take that on,” Grocki said with a laugh.

Grizard remarked that Grocki “had the professional expertise that was required for the job, and also was able to do this in a ministry context — to be vocational, almost, responding to her call as a Christian.” He said that going forward, Grocki’s duties are likely to be spread among existing Pastoral Center staff and “at some point” he expects a new hire to be made. However, Grizard acknowledged that Grocki’s position “was created over time, around the many gifts she had to offer. It’s difficult shoes to fill … it’s going to be very hard to find someone who has all these skills.”

Grocki enters retirement in good health, which she considers a huge blessing. A year ago she underwent breast-cancer surgery, and she said she has since been declared cancer-free.

A parishioner of St. Jude Church in Gates, Grocki said she plans to maintain close contact with her many priest friends. She also is looking forward to spending more time with her family: husband Richard, two children, five grandchildren and one great-grandchild. In addition, she noted that she’s already begun exploring volunteer opportunities.

“God’s been with me my whole life. I believe that, and just feel this is the right time God is calling me to something else,” she said.