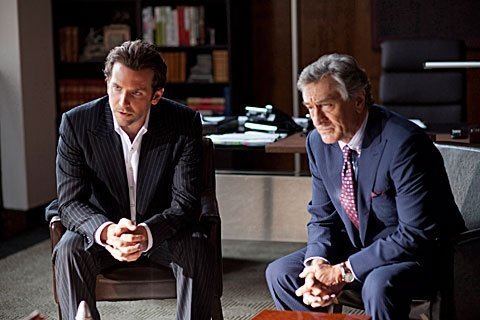 NEW YORK (CNS) — If we could all use 100 percent of our brains, we’d be rich, ruthless and get away with cold-blooded murder. That’s the bluntly cynical message of "Limitless" (Relativity), a labyrinthine thriller about a mysterious pill that produces precisely such a hypomanic edge.

More benignly, this adaptation of Alan Glynn’s 2001 novel "The Dark Fields" also suggests that, in our information-glutted age, those with the ability to sort it all out to see the larger picture gain a competitive advantage.

Well and good. Along the way, however, Leslie Dixon’s script trivializes the murder of a woman who has the misfortune to wind up as collateral damage in one of protagonist Eddie Morra’s (Bradley Cooper) manic episodes under the influence of the secretive drug in question, a chemical known as NZT.

Morra is a failing sci-fi novelist who’s losing his girlfriend Lindy (Abbie Cornish) and can’t make his rent. When his former brother-in-law Vern (Johnny Whitworth) — a one-time dope dealer now claiming to have gone legit — gives him a capsule of NZT, though, Morra instantly pulls his mind together and goes on to produce a hit novel, win Lindy back, learn multiple languages and experiment with day trading.

He’s so successful at picking stocks that he gets pulled into the financial dealings of billionaire Carl Van Loon (Robert De Niro) while simultaneously evading a gaggle of Russian gangsters and finding ways to score more NZT, even if he has to hire a chemist to make the stuff.

There are many scenes showing how productive Morra has become and, presumably, how creative the rest of us could be if we could only harness our full brainpower. Singing the praises of NZT, Morra comments, "Everything I’d ever heard, read or seen was now organized and available."

Director Neil Burger lays on the brain-expansion imagery pretty thick: All full-tilt minds evidently must zoom through New York City traffic like runaway trains, and when the words spill into Morra’s head as he feverishly bats out his novel, they literally fall from the ceiling. As for some plot threads about brain damage, though, Burger leaves them dangling.

Far more significantly, "Limitless" seems to apply its title to Morra’s moral status, as he blazes a trail of homicidal violence that entails no discernable consequences. Once fueled by NZT, so it would seem, Morra becomes a Nietzschean superman above mere right and wrong.