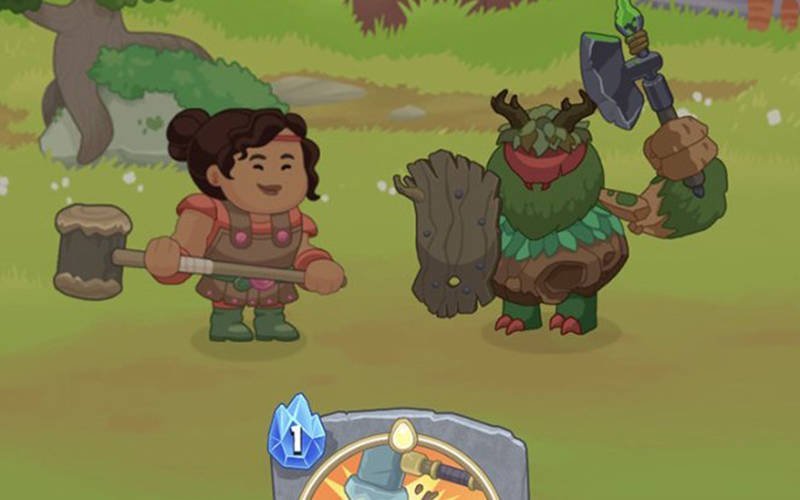 This is an image for the video game “Lingo Legend.” The Catholic News Service classification is A-I — general patronage. Not rated by the Entertainment Software Rating Board. (CNS photo by Hyperthought)

NEW YORK (CNS) — Playing video games can be among the most effective ways of learning a new language. “Lingo Legend” (Hyperthought) provides such instruction in the context of strategic card battles and in a highly accessible format.

Aila is the game’s female avatar while Hamish is her male counterpart. Both are shepherds. Each embarks on a quest through dangerous lands to recover a missing flock. The path along which they pass is often blocked by fantastical enemies.

Players can easily swap between Aila and Hamish and this has no impact on gameplay. Through the simple storyline, both characters promote teamwork and collaboration.

As in other deck-building games, including “Hearthstone” and “Magic: The Gathering,” there are over 100 cards to choose from. These are necessary to battle the various foes Aila and Hamish encounter. The resulting dust-ups are harmlessly unrealistic.

Five cards are automatically dealt to the bottom of the screen at the start of every turn. Combat is executed by picking one and activating the ability it conveys. To do so, however, gamers must first translate a question or phrase. If they fail to answer correctly, the card will vanish, and no action is taken.

Through this process, players not only learn vocabulary lessons but grammatical ones as well. Spanish, German, French, Portuguese and Italian versions are all available already, others are in development.

“Lingo Legend” is currently in beta access, the phase during which developers give gamers free access in order to test for crashes or bugs. Players can sign up for beta or they can follow along on social media to see when the game will be fully released.

Playable on Android and iOS.

The game contains some cartoonish violence. The Catholic News Service classification is A-I — general patronage. Not rated by the Entertainment Software Rating Board.