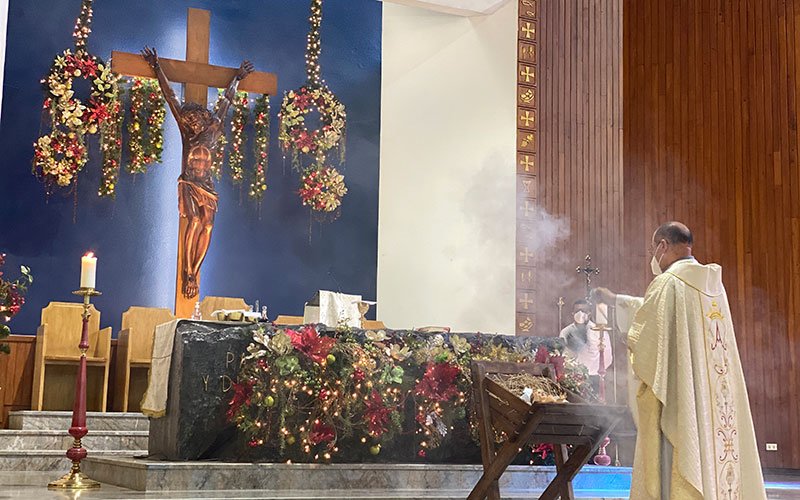 Discalced Carmelite Father José Fredi Arteaga Figueroa censes a figurine representing the baby Jesus during Christmas Mass at our Lady of Mt. Carmel Parish in San Salvador, El Salvador, Dec. 25, 2020. The story of the Savior's birth must be told again and again. And people need to listen once again, but each time as if it is the first time! (CNS photo by Rhina Guidos)

A woman in the Rite of Christian Initiation of Adults admitted that she had almost no knowledge of Christianity until she met her husband-to-be. In fact, she said, the only thing she knew about Jesus when she was growing up was what she had heard in a few Christmas songs.

Although her statement is astounding since most people who read this have been immersed in aspects of Christianity their entire lives, people need to remember that this is not true for everyone.

Some people simply are not privileged with Gospel accounts or regular worship to inspire them.

At the same time, however, this woman’s reference to Christmas songs is a reminder that carols, paintings and other ways of remembering the Christmas story can serve a purpose of letting the good news enter a secular world.

As a priest, I have found that the celebration of the Lord’s birth can be both the most joyful and the most challenging of times. The story of the Savior’s birth must be told again and again. And people need to listen once again, but each time as if it is the first time!

The challenges of Christmas

Among the challenges of Christmas can be the crowds. It’s not uncommon that regular church attenders become critical of those who only attend once or twice a year, usually at Christmas or Easter. They may even feel overrun by others who sit in their regular place.

To the contrary, the presence of visitors is something to rejoice in, not to criticize. In weeks before Christmas I have frequently reminded parishioners to maximize their sense of hospitality on such occasions.

Christmas Masses also bring in families with both parents and children suffering from distractions of the holiday. Little kids often can’t seem to sit quietly. Parents, in addition to guiding their children, can easily be preoccupied by the way they have, or have not, planned this Christmas Day.

Some have told me they were worried throughout the Mass about how long it would last because grandmother was expecting them for dinner and they dare not be late!

Perhaps the biggest challenge for Christmas, however, is for people to hear the accounts of the first Christmas in a new way. Most people already know the story of Jesus’ birth. Even the woman in RCIA with no religious background was aware that Jesus had been born on earth.

Help people reflect on the Christmas story in a new light

Because so many people think they already know, they tend not to listen fully. Preaching has to go beyond some lovely platitudes about birth, stables, love and poverty. The homilist has to help people reflect on the story again in a new light.

How that is done can vary according to the ability of the homilist.

First of all, there has to be focus on the overall message of the Gospel. Many times church people compartmentalize the life of Jesus: one segment on Jesus as infant; one slice of his adult teaching; and then addressing Jesus on the cross or resurrected. That can be a disservice, since the entire message is present in all parts of Jesus’ life.

At Christmas, perhaps instead of only highlighting Jesus as infant, we need to underscore Jesus as God taking humanity upon himself, entering the human family, being truly and fully a person.

With this in mind, we can look at the nativity of the Lord as a new beginning for humanity. The call for people to live selflessly flows from the selfless love of God in the incarnation event. It is a reminder of what each person is called to be: fully human saturated with the divine.

Perhaps, most of all, worshipers have to find ways to connect this divine mystery with the present. It is easy for people to think, often with pious gratitude, about an event two millennia in the past. To highlight that Jesus remains incarnate and living on this earth is another matter. It means going beyond remembering and allowing the past to be present.

Images of Christmas no longer sufficient

The very images that so many people have in their minds of Christmas can provide a warm feeling, but they are no longer sufficient. Good feelings must lead to conviction and commitment to a new way of living.

Since childhood I have liked the Christmas carol, “O Little Town of Bethlehem” because of its words about hopes and fears meeting in that holy night. Mostly, though, I had created an image of the little town based on the Nativity set that was enshrined in my childhood parish church.

Upon visiting the contemporary Bethlehem, however, I discovered with dismay that it is no longer a little town. In fact, there are high-rise, five-star hotels for pilgrims and plenty of room in the inn!

Most disconcerting, however, was seeing the armed soldiers at the checkpoint as our bus crossed the line from Israeli to Palestinian territory.

In reflection, however, I discovered a renewed meaning of Jesus’ birth. What we often take so glibly of the oppressive times into which Jesus was born, needed to be translated into the 21st century.

The truth remains, however, that God has truly entered this world in all its divisiveness and frailty, and in doing so, gives hope and purpose to all people!

(Father Herb Weber is founding pastor of St. John XXIII Catholic Church in Perrysburg, Ohio. His weekly podcast can be found at 23.church.)