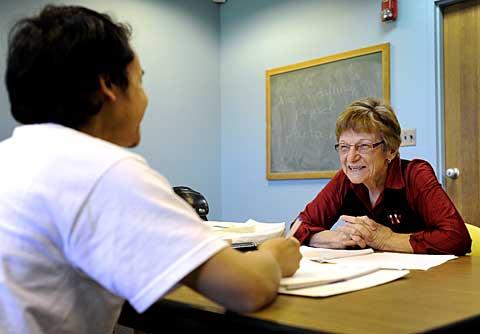 He wants to go to college, and then he hopes to get a job as a case manager, helping refugees.

"I also want to become an American citizen," said Gay, 32, a refugee from Burma.

Gay, a member of the Karen ethnic minority, fled persecution as a teenager and lived for 12 years in a refugee camp in Thailand. In July 2007 he came to the United States through Catholic Family Center’s refugee-resettlement program.

He knew only basic English when he arrived.

But a ministry of the local Sisters of Mercy helped him improve his English skills, making his American dreams possible: He will start college next year.

Gay spoke about his success with the Mercy Bridges adult literacy program during an April 15 reception that featured stories of the accomplishments and successes of some of the learners in the program. The event was intended to show Mercy Bridges’ supporters how their help has improved people’s lives, said Sister of Mercy Edwardine Weaver, the program’s founder and director.

"These people know Mercy Bridges, but they don’t (get the chance to) see the big picture," Sister Weaver said of the supporters who attended.

Learners such as Gay have used improvements in their reading, writing or speaking skills to help them land jobs, earn their equivalency diplomas, learn how to drive or move up in their careers. While some of the learners may never have been to school before, others are highly educated, such as the medical doctors who are participating in the program to improve their English as they work to establish medical practices locally.

"We see it as a ministry," Sister Weaver said. "We’re helping people become responsible and improve their self-esteem and motivating them to become more than they feel they are capable."

Mercy Bridges began in the fall of 2006 as a way for the Sisters of Mercy to celebrate 150 years of ministry by addressing an unmet need in the community. The idea for an adult literacy program came from a City of Rochester-sponsored literacy summit that year.

The ministry started from scratch — without even a paper clip — but people stepped up immediately to volunteer and help get the program running, Sister Weaver said.

"I really see it as a sign that this is God’s work," she said.

In the past four years, Mercy Bridges has trained 130 tutors and has interviewed 225 learners, who are taught one on one in public places all over Monroe County. The learners have hailed from 34 countries and between them speak 33 languages. The program collaborates with 23 agencies.

Although most of its tutors are or have been teachers, teaching experience is not a prerequisite to volunteering with the program. Tutors are trained at the outset, and the program also offers optional continuing-education programs for its trained tutors.

"In the program, we’re encouraged to try to meet the needs of individual students," said tutor Barbara DiFiore of East Rochester, who was a teacher for 42 years.

For instance, Sandy Heberle of Irondequoit sought out the program to help her improve her skills; she said as a supervisor, she was struggling as she tried to write employee evaluations. Heberle said she never did well in school and quit in the 10th grade. Now she’s proud of the success she has had with the program.

"I’m older and wiser," Heberle said of her new motivation. "It (education) means something now when it didn’t mean anything to me when I was growing up. And, it helped getting good marks."

English is not the first language of many of the learners in the program. For instance, Lazarus Fazal of Rochester, who came to the United States from Pakistan in 1993, heard about the Mercy Bridges program when Sister Weaver spoke to St. Monica Parish about it.

"She said it was for anyone who wanted to learn a little better English," Fazal said. "She provided me with very hard-working teachers."

Fazal worked hard as well, and improved his English enough that he passed the test to become an American citizen. He works at Hudson News at the Greater Rochester International Airport.

Fazal has worked for two years with JoAnn DeMott, a fellow St. Monica parishioner and a retired elementary-school teacher. DeMott got the chance to attend the ceremony during which Fazal became a citizen on Nov. 7, 2009.

"It gives you a sense of pride to be an American and to see that whole ceremony, and see someone who worked that hard to be there," DeMott said.