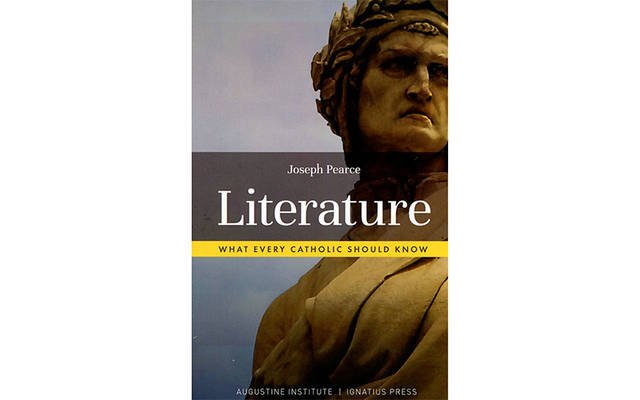 This is the cover of Literature: What Every Catholic Should Know by Joseph Pearce. (Photo by CNS)

Every day, television headlines are more tiring, the social media scrolling more soulless and popular culture continues its pursuit of “relevance” over actual meaning. It might be time to sink your teeth into written works that actually sought to plumb the depths of humanity and have withstood the test of time.

But like walking into a supermarket on an empty stomach, resolving to read more classic literature can end up in the paralysis of a paradox of choice — with so many classic works to choose from, what to prioritize? What kinds of works might be right for a given state in life? Where to even begin? Flipping on the latest streaming sitcom starts to sound like the path of least resistance.

But like Virgil leading Dante, Joseph Pearce, in Literature: What Every Catholic Should Know, offers a concise guide to thousands of years of stories that have enriched countless lives. Starting with the ancients and leaving off in the mid-20th century, Pearce, editor of the St. Austin Review, aims to whet your appetite with short introductions to the tales his book’s subtitle claims that “every Catholic should know.”

The book offers a Cook’s tour through pre-Christian epics, a full-throated defense of Dante’s Purgatorio and Paradisio, a helpful take on dystopian fiction and St. Thomas More, and rightfully effusive praise for the insights of Jane Austen. Literature becomes especially rich when Pearce gets to 19th- and 20th-century figures. Each short chapter in Pearce’s 200-page volume tackles an author or an era, situating the work in a historical context and offering some lenses for interpretation (with no alerts for the spoiler-averse).

After the text, an appendix will spur dozens of friendly arguments. One hundred works of literature, from Homer to J.R.R. Tolkien, begging to be hashed over and pinned on fridges, suggested to bored teenagers and set as goals by ambitious retirees.

Pearce’s list displays a distinct Anglophilia. Devoting 13 slots to Shakespeare may be forgiven because, well, the Bard is the Bard. But he also selects seven works of C.S. Lewis, four by G.K. Chesterton, four by Charles Dickens, three by Robert Hugh Benson, and another three by the lesser-known Maurice Baring — that’s one-fifth of his list of 100 devoted to just five English writers who span just about a century.

Despite a considerate treatment of Mark Twain’s Personal Recollections of Joan of Arc and calling Moby Dick a “de profundis” work in the book itself, they somehow do not merit inclusion in the final roll call.

These are, of course, the kind of debates any such list is meant to inspire, just as bargoers debate the furthest home run they ever witnessed. But a flaw in his treatment of fiction’s moral ambiguities is the biggest weakness of the book.

Take Graham Greene, the writer whose complex antiheroes and willingness to paint in shades of “black and gray” contrast with Pearce’s evident affinity for more black-and-white tales of moral heroism, like Benson’s Come Rack! Come Rope!

Readers who prefer tales of straightforward, Christ-like simplicity will, perhaps, appreciate Pearce’s disproportionate focus on those stories. But the appeal in novels like Greene’s lies in their understanding of the complexity of human action, the inability to turn off the small, still voice of conscience, and the insight that, as Fyodor Dostoevsky put it, “the line between good and evil runs through every human heart.”

There are many non-Catholic books by non-Catholic writers that uncover deep truths about man’s relationship to God, the divine, and his fellow man, but Pearce’s approach tends to discount them.

Despite occasional forays into a kind of paternalism, Literature shines when it allows Pearce to show off his erudition as well as his obvious affection for the writers he knows best. His favorites aren’t hard to spot, and tend to be figures he’s profiled in other books: Shakespeare, Chesterton, Tolkien (with six references in the first 11 pages), Oscar Wilde, Hilaire Belloc and Dante.

When, in contrast to the usual brief sketches, he spends a generous five pages on Evelyn Waugh’s Brideshead Revisited, you sense Pearce come alive with excitement about the book he calls “arguably the finest novel of the 20th century.” His treatment of the Lord of the Rings trilogy is similarly passionate.

Those moments in the book conjure up a warm hearth, a stiff beverage, and a friendly argument about which stories worth most telling — the kind of conversations this book is meant to inspire, and that are improved by having a friendly, well-read guide like Pearce.