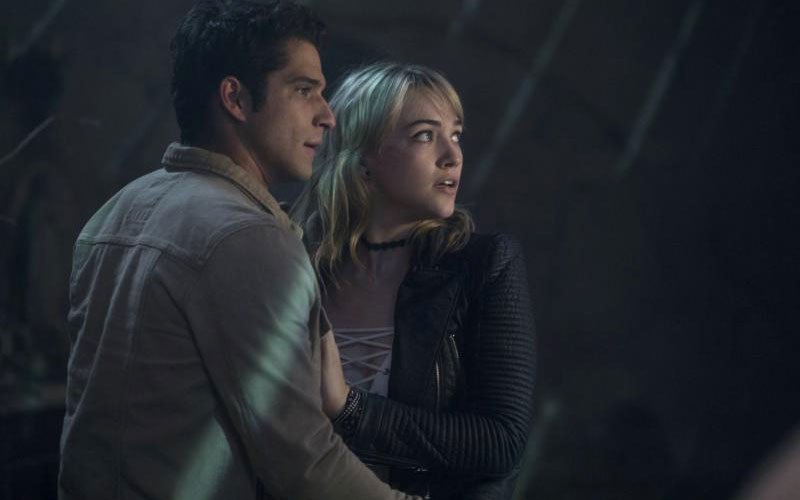 Tyler Posey and Violett Bean star in a scene from the movie "Blumhouse's Truth or Dare." The Catholic News Service classification is A-III -- adults. The Motion Picture Association of America rating is PG-13 -- parents strongly cautioned. Some material may be inappropriate for children under 13. (CNS photo by Universal)

NEW YORK (CNS) — There’s little authenticity or audacity to be found in the dull thriller “Blumhouse’s Truth or Dare” (Universal).

Rather than chilling viewers, director and co-writer Jeff Wadlow’s film merely succeeds in endangering its cast via a supernatural version of the titular pastime. The movie thus constitutes a sort of safe, bourgeois take on the sadistic “Saw” franchise.

While visiting Mexico for spring break, a group of friends — dating couple Markie (Violett Beane) and Lucas (Tyler Posey) and Markie’s bestie, Olivia (Lucy Hale), most prominent among them — cross paths with fellow college student Carter (Landon Liboiron) who offers to take them on a late-night adventure. Their destination turns out to be an isolated, abandoned and, as we eventually learn, accursed mission church.

Once there, Carter oh-so-casually suggests to his companions that they all play a game, and sees to it that they don’t settle on charades. His ruse works and, once it’s too late to reverse the spell, he briefly explains the rules — and offers the plea that the only way for him to stay alive was to expand the circle of players — before making his escape. Since the only real regulation is “play along or die,” this doesn’t take long.

Naturally, the pals brush all this off as crazy talk. But once back home, fatalities follow as do relationship-altering revelations. These have little impact on the audience, however, since the imperiled band are, one and all, mere types.

That includes gay Brad (Hayden Szeto), whose policeman father (Tom Choi) isn’t exactly waving the rainbow flag, thus setting Brad up to deliver a supposedly daring bit of truth. Brad makes kissy-face with a stranger in one scene and reveals which male among the amigos he feels most attracted to in another.

But the implicit taking for granted of Brad’s lifestyle in the script — on which Wadlow collaborated with Michael Reisz, Jillian Jacobs and Chris Roach — is too incidental to warrant much notice.

More noteworthy is the fact that the backstory involves a priest molesting young nuns and that one of the dares sends two of the characters to bed together. All combined, these irksome elements indicate that only grownups should subject themselves to this mediocre piece of moviemaking.

The film contains much harsh violence with some gore, semi-graphic nonmarital sexual activity, shadowy rear nudity, a homosexuality theme, a couple of same-sex kisses and considerable crude and crass language. The Catholic News Service classification is A-III — adults. The Motion Picture Association of America rating is PG-13 — parents strongly cautioned. Some material may be inappropriate for children under 13.