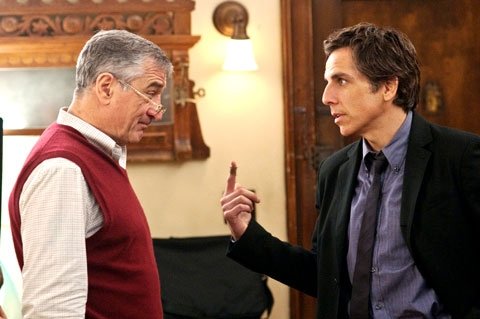 NEW YORK (CNS) — Rather than focus on the next generation of Fockers, as its title implies, the second spawn of 2000’s popular comedy "Meet the Parents" dwells on the infantile behavior of their elders. That wouldn’t be so problematic if the adults’ antics were occasionally humorous or simply benignly juvenile. But "Little Fockers" (Universal) is extremely dull and tasteless at the same time.

Once again, the definition of family values is expanded in a way that many viewers will consider unpalatable, before finally being circumscribed in a more wholesome manner.

When "Little Fockers" opens a half-decade later, Gaylord and Pam are living in a Chicago apartment with their twins Henry (Colin Baiocchi) and Samantha (Daisy Tahan). The couple is hoping renovations on their new home will be completed in time for the children’s fifth birthday party. Meanwhile, Gaylord is juggling his parental duties with his career responsibilities as a nursing administrator in a city hospital.

As the date for the party approaches, Jack suffers a mild heart attack, yet keeps it a secret from everyone except Gaylord. Concerned that the Byrnes-Focker clan will be left without a male leader in the event of his demise, the wily ex-spy nominates Gaylord to assume the patriarchal mantle.

The substance of the action is the bonding and jousting that result from this intergenerational transfer of authority. The Byrnes arrive in town for the celebration and Jack — whose coronary episode hasn’t noticeably slowed him down — proceeds to meddle in Gaylord’s affairs, advising him to enroll the twins in an expensive private school and encouraging him to get his financial house in order.

Just as young Henry and Samantha are merely foils for the in-law tension between Gaylord and Jack, Roz and Bernie are incidental to the plot, a circumstance that will disappoint those who relished watching the veteran performers let their hair down in "Meet the Fockers."

After Henry accidentally sees his father perform a disturbing medical procedure on his grandfather (necessitated by Sustengo), Jack offers to erase the boy’s memory using psychological techniques he mastered as a CIA agent during the 1970s. Gaylord dissuades him. But, after sitting through "Little Fockers," viewers might volunteer to have their memories wiped clean.