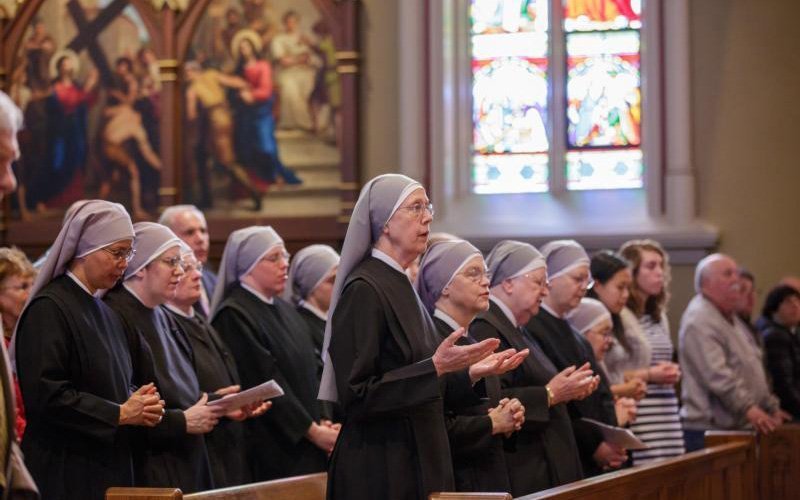 Members of the Little Sisters of the Poor pray during Mass at the Basilica of the Sacred Heart at the University of Notre Dame in Indiana April 9, 2016. (CNS photo by Peter Ringenberg/Notre Dame Center for Ethics and Culture)

WASHINGTON (CNS) — The Little Sisters of the Poor filed a petition with the Supreme Court Oct. 1 asking the court to once again protect them from the contraceptive mandate of the Affordable Care Act.

This has a familiar ring because in 2016 the Supreme Court granted the sisters a religious exemption from the government’s mandate requiring them to include coverage of contraceptives in their employee health plans or pay hefty fines.

Then, one year later, they were given further protection by an executive order issued by President Donald Trump requiring the U.S. Department of Health and Human Services to write a comprehensive exemption to benefit the Little Sisters and other religious ministries from the contraceptive mandate. HHS provided this exemption in 2018 but several states challenged it, including California, Pennsylvania and New Jersey, saying HHS didn’t have the power to give this exemption.

The states of Pennsylvania and New Jersey were able to obtain a nationwide injunction against the rules protecting religious objectors from the contraceptive mandate and that injunction was then upheld by the 3rd U.S. Circuit Court of Appeals, based in Philadelphia. The Little Sisters are appealing the 3rd Circuit’s ruling to the Supreme Court.

“It is time for the Supreme Court to finally put this issue to rest,” said Mark Rienzi, president of Becket, a nonprofit religious liberty law firm that represents the sisters.

In a statement, he also called the case he hopes the court will take up “a nonsensical political battle that has dragged on six years too long.”

“These states have not been able to identify a single person who would lose contraceptive coverage under the new HHS rule, but they won’t rest until Catholic nuns are forced to pay for contraceptives,” he said.

Mother Loraine Marie Maguire, of the Little Sisters of the Poor, likewise pointed out that this battle has been a long one. “It has been six long years since we began our legal battle against government mandates that threaten our ministry,” she said.

“We hope we have finally reached the end of this arduous process, that the Supreme Court will reaffirm their previous decision, and that we will soon be able to keep our focus on the elderly poor,” she added.

The 224-page petition before the court is for this case: The Little Sisters of the Poor v. The Commonwealth of Pennsylvania.