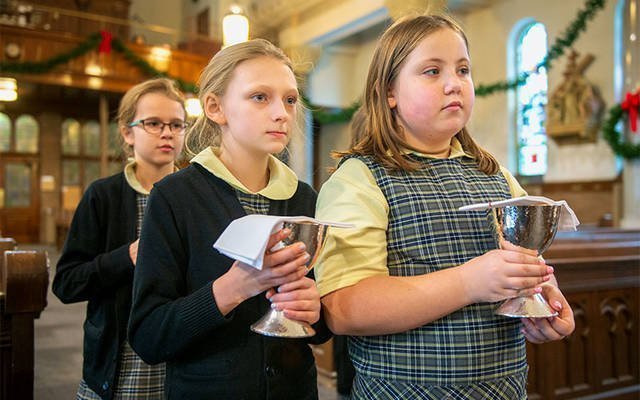 School Masses hold a special place in the hearts of St. Rita School’s parents and students alike. During the school year, each grade level is assigned to take responsibility for at least one Mass, at which students are responsible for carrying out various liturgical roles.

“The students do the readings, the prayers of intention, the singing and anything else that may need to be done for that particular Mass,” explained Kerri Kiniorski, mother of current students as well as St. Rita alumni. “Watching the students run the Mass is one of my favorite parts of Catholic school.”

The Webster school is just one of several diocesan Catholic schools that have long assigned students leadership roles at school Masses, according to Ann Marie Deutsch, principal at St. Mary School in Canandaigua.

“We have always done it,” she remarked. “I’ve been here 18 years, and it was done before that.”

Going to church helps St. Mary students understand that going to Mass isn’t merely something they do, but rather, it’s an important part of who they are, Deutsch added.

Such active participation is key, agreed School Sister of Notre Dame Susan Czaplicki, the faith-formation director at Most Holy Name of Jesus Parish in Elmira. Sister Czaplicki regularly invites students from a designated grade level at Elmira’s Holy Family Elementary School to join with students in the corresponding grade level of the parish’s faith-formation program to minister together at weekend Masses. The children are invited to be greeters, gift bearers, lectors, choir members or altar servers if they’re already trained to serve, and to distribute bulletins after Mass.

Increasing the likelihood that children will remain active Mass-goers as they grow into adulthood is one of the goals of such student participation, noted Suzanne Pohorence, math teacher at St. Mary School and coordinator of altar servers at St. Benedict Parish in Canandaigua and East Bloomfield. Parents frequently tell her that after being trained to serve on the altar, their children are much more attentive during Mass than they were before, even on days when they are not serving.

“When they do serve they know that the role they have is to make the Mass a beautiful celebration of the Eucharist. I think the students take ownership of that when they serve because they want to be helpful and do their part in a reverent way,” Pohorence said.

While students become more familiar with the order and significance of the various parts of the Mass, they also develop a deeper understanding of their faith, Deutsch added. This in turn helps them understand who they are as people and how their faith will guide their interactions with others as they grow up, Deutsch added.

Serving, reading or singing in front of others — and excelling at it — also helps students build a confidence that will serve them well in other areas of their lives, she said.

“When our kids graduate, they’ve done enough presentations either in church or in the classroom that they are the ones that have no problem presenting in front of others,” Deutsch remarked.

“It is gratifying to see not only the children but also their families get involved,” Sister Czaplicki said.

“It’s invigorating to see such young people taking leadership roles in such a way,” she remarked.