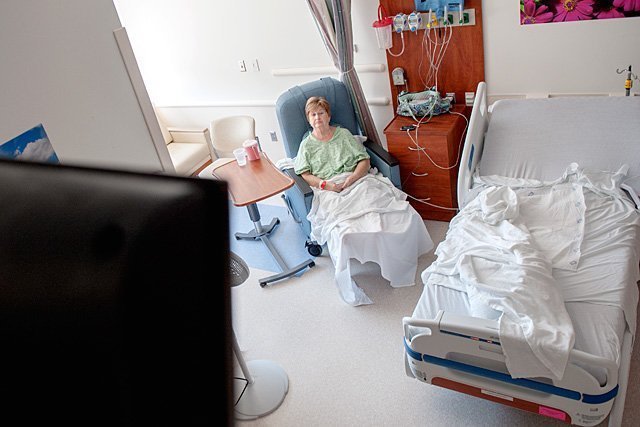 Dorothy Ecklund, a parishioner of Livonia's St. Matthew Church, watches a live broadcast of Sunday Mass from her room at the University of Rochester Medical Center's Wilmot Cancer Center Aug. 16.

ROCHESTER — When Father Brian Cool celebrates Masses on Sundays, students and staff at the University of Rochester’s Newman Center won’t be the only ones celebrating with him.

Patients staying at the University of Rochester Medical Center will be able to take part in the liturgies, thanks to a new live broadcast of the center’s Sunday Masses right on their TVs.

"I have been dreaming about this for many years and it has finally come to fruition," Father Cool, the center’s director, said during an Aug. 13 luncheon celebrating the project.

When Father Cool was first assigned to the University of Rochester in 1999, he said the Newman Community was grateful to have a full-time priest to celebrate Mass in light of the shortage of priests in the diocese. Meanwhile, the chaplaincy at Strong Memorial Hospital had a reduction in priests serving patients, and weekly Sunday Mass was no longer available there. This made Father Cool think about how the Newman Community could expand its ministry to include the hospital. In December 2013, he and Ron Paprocki, senior vice president for administration and finance at the University of Rochester, began talking about such opportunities.

"I told him I’d love to stream the Masses from the (university’s) River Campus into the hospital, knowing that we had two Masses on Sunday with our students," Father Cool said. "Not only did I think that was a great service that we could provide the hospital, but it was also a way to insure that we were able to have Catholic Mass for our students on the River Campus." 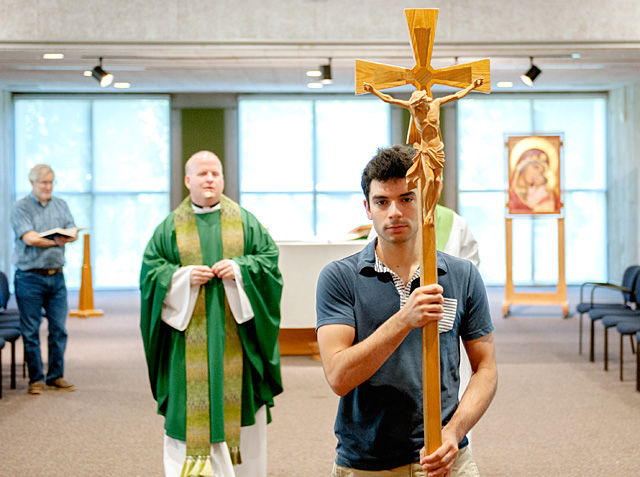 Paprocki and his wife, Cathy, occasionally attend one of the Newman Community’s Sunday Masses and were aware of the need to stream Mass into the hospital.

The project began taking shape in 2014, with the Paprockis expressing a willingness to help financially support it and a number of staff members from the university and the medical center jumping on board.

"When I started seeing a whole team of people coming together, engineers plotting things out very methodically and purposely, I was very impressed from day one," Father Cool said. "Many people came together to make this happen and plan this out. It was amazing."

Deacon Craig Stratton, who serves the Newman Community as well as provides pastoral care for patients at the medical center, said the project is a great example of both the Newman and hospital communities working together.

"They are not just thinking about their own needs," Deacon Stratton added. "They are looking at the greater need."

To help fulfill that need, this past spring engineers and IT staff from the college installed two video cameras in the Newman Community’s space in the university’s Interfaith Chapel. All other equipment necessary to stream the Mass is housed in the audio/video cabinet in the chapel.

Once the equipment was in place, the Newman Community began testing it. After all the kinks were fixed, the stream was up and running in patients’ rooms this past May.

Shortly after everything went live, the project became personal for Father Cool. In June, his father suffered a stroke and was taken to Strong Memorial Hospital. While in the rehabilitation unit there, his father was able to take part in Mass with him from the hospital.

"I was truly grateful and realized how much of a service this is to families, and patients in particular," Father Cool said.

To see the live Mass, patients just need to turn their room TVs to channel 76. Masses are streamed each Sunday at 10:30 a.m. and 7 p.m. during the school year and at 10:30 a.m. only in the summer. When Sunday Mass isn’t being celebrated, patients can see recorded services, a slide presentation with information about events going on at the Interfaith Chapel and with the Newman Community, and a recorded video message from Bishop Salvatore R. Matano.

When students return in the fall, Father Cool hopes some — particularly the ones studying audio engineering and digital media — will use their expertise to get involved with the streaming project to help improve it for the future, as well as to troubleshoot any equipment problems that may occur. In addition, Father Cool is hoping to spread the word about the service and bring it to more faith communities that may want to use it to stream their services into the hospital as well.

"We want to make this truly an interfaith event," he said.