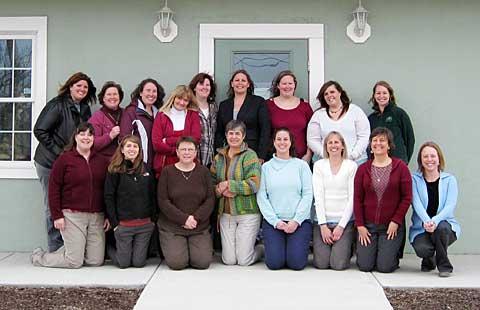 The staff of Catholic Charities of Livingston County in 2009.

Growth is a great thing, and Catholic Charities has seen its share of it over the years. Catholic Charities of Livingston County is no exception. The agency saw so much program expansion toward the beginning of the 21st century that it was bursting at the seams.

The agency was in desperate need to expand its office, so in 2007 it purchased a facility on East State Street in Mount Morris. This purchase was made possible through an anonymous $100,000 donation, and renovations on the facility began thanks to a $100,000 loan from the board of diocesan Catholic Charities.

Through a capital campaign in 2008, sufficient funds were raised to repay the diocesan loan. The move was made to the new facility in May 2009.

From the beginning, however, it was recognized that while the new facility was far superior to the previous space, still more room was needed. The board of Catholic Charities of Livingston County is currently considering further expansion ideas and plans for additional fundraising.