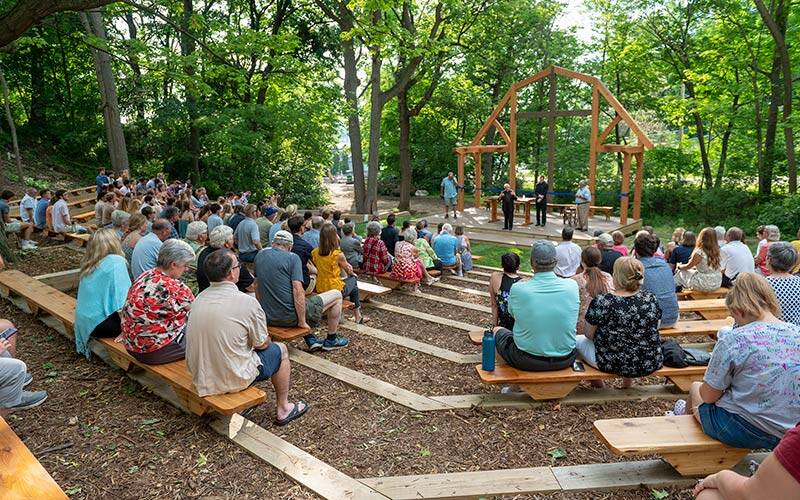 LIVONIA — The 2022 summer-camp season is in the books. And although this season was Camp Stella Maris’ 96th summer, it marked the first time campers were able to use the camp’s brand-new outdoor chapel.

Located in a quiet wooded area of the camp, the new St. Mary, Star of the Sea Chapel seats about 450 people and comfortably accommodates all of Camp Stella Maris’ campers and staffers, who attend Mass together two or three times a week during the summer, according to John Quinlivan, the camp’s executive director.

“This was a super important project for me,” Quinlivan said.

The camp “outgrew” St. Jude Chapel — the indoor chapel on the grounds — back in the 1980s, he explained.

“We’ve been doing Mass anywhere we could find a shady spot outdoors. When I got here, I made it my goal, let’s find a home for that,” said Quinlivan, who started working at Camp Stella Maris in 2008.

Quinlivan started working on that goal in 2016, along with a group of board members, camp supporters, staff and designers.

“(We) got together for a two-day meeting and began to dream about what the Camp Stella Maris of the future would look like, and what we would need to do to make sure it was here for future generations,” he explained. “From that work an ambitious master plan was developed that would ensure that camp was equipped to thrive.”

The first project the camp’s staff tackled was an upgrade to Camp Stella Maris’ waterfront area on the shore of Conesus Lake. The next project on the master plan’s checklist was the construction of a new health center, which was completed and dedicated in 2019.

Quinlivan and his team then turned their attention to the outdoor chapel. Their first task was to decide where to build the chapel.

“We sort of settled on a place we called ‘the glen.’ It’s right in front of St. Jude’s Chapel, in a shady spot, and it’s a natural sort of bowl on the northwest side of camp. We decided that was the best place to build an amphitheater,” Quinlivan said.

Construction was set to begin on the outdoor chapel in March 2020, but the pandemic delayed it until the fall of 2021, he said. That fall, workers put in the terracing that now rises up on three sides of the wooden platform that holds altar. Construction on the rest of the chapel began in earnest in the spring of 2022 and was completed in time for the start of the summer-camp season in late June.

Bishop Salvatore R. Matano visited the camp to dedicate the altar on June 22, which is the feast day of the Diocese of Rochester’s patron saint, St. John Fisher. The bishop’s visit came just days after he opened the diocesan phase of the National Eucharistic Revival.

“It is particularly fitting that this chapel, where holy Mass will be offered, is dedicated and blessed on this day,” Bishop Matano said during the dedication of the chapel.

The outdoor chapel’s wooden benches were filled with camp supporters and staff as well as the new crop of camp counselors as Bishop Matano asked God to bless the chapel and make it a fitting and reverent place for the faithful to pray.

A place of reverence

Ensuring that the chapel was such a place of reverence was a top priority for Quinlivan and his team as they worked to choose the chapel’s location, Quinlivan said.

“I wanted to make a place the kids could be connected to God and to nature. That’s one thing that camp does,” he said. “I think it’s the right place to have an outdoor chapel like this. There’s a creek that runs behind it. It sets them in a comfortable place where they can hear the message of God.”

Quinlivan anticipates other groups aside from the campers also may want to spend some time in St. Mary, Star of the Sea Chapel. Groups from Catholic schools often hold retreats at the camp, and Quinlivan hopes they’ll be able to use the new chapel. Quite a few people outside of the immediate camp community already seem quite invested in the chapel, he remarked.

“The community is really around it. A lot of people walk and drive by just to see it. We’ve actually had some friends of people who are working on it just come by to volunteer their time (during the construction phase),” Quinlivan said.

Tags: Livingston County News
Copyright © 2022 Catholic Courier, Inc. All rights reserved. Linking is encouraged, but republishing or redistributing, including by framing or similar means, without the publisher's prior written permission is prohibited.