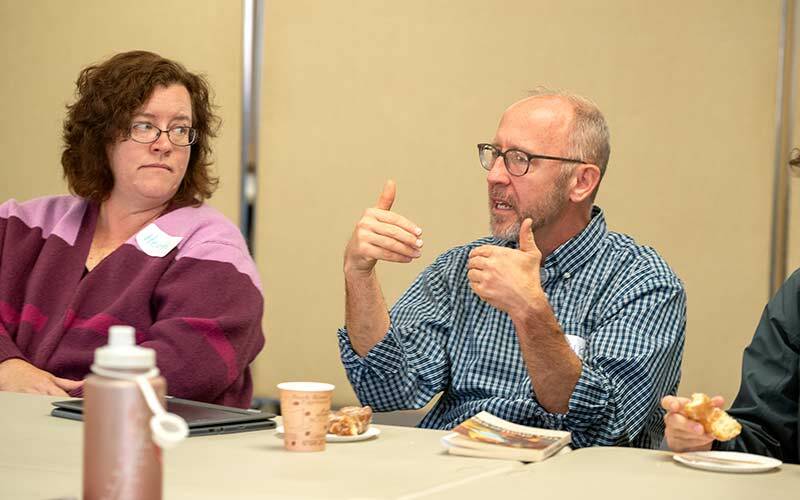 GENESEO — A husband and wife, sitting in the same room, text each other repeatedly rather than have a verbal conversation.

Family members at a sit-down restaurant, immediately upon ordering their meals, return to silently staring at their respective cell phones while seated around a table.

Sound a bit far-fetched? These are actual behaviors that people who attended a workshop Oct. 30 admitted to repeatedly engaging in. Yet such uses of electronics are becoming the norm, as indicated by the event’s title, “Alone Together: Why Are We All On Our Phones?”

Approximately 12 people, mostly parents of adolescents and younger children, took part in the round-table discussion at St. Mary Church in Geneseo, which is part of Livingston County’s St. Luke the Evangelist Parish. The program probed the impact of electronic devices in their own lives as well as their kids’. It was led by Mike Sauter, St. Luke’s pastoral administrator, and parishioners Rob and Rebecca Christie.

Sauter cited a troubling trend that led to the workshop. He said that modern technology has the capacity to connect us with any amount of people — yet very often without the quality, face-to-face relationships that are essential to human growth.

“We interface, but we don’t converse,” Sauter remarked. “We need ‘community,’ not ‘crowd.’”

Many participants on Oct. 30 said they appreciate the convenience of internet communication, yet they struggle at times to set healthy limits for themselves and their children. For instance, one mother said that her teenage daughter is so dependent on her cell phone that “she thinks it’s a lifeline for her.” When it broke, forcing her to temporarily use a flip phone, “she went into such a dark hole because she felt so disconnected.”

One father pointed out that social media and other aspects of the internet are designed to capture our attention for as long as possible, much in the way that casino slot machines are programmed to keep people engaged. He recommended the book The Chaos Machine by Max Fisher and the movie “The Social Dilemma” as thoughtful examinations of how deeply society has been affected by this trend.

Meanwhile, a SUNY Geneseo student taking part in the discussion observed that he couldn’t get by without internet usage even if he wanted to, saying he’s required to be on his laptop computer for all of his classes.

“It’s pretty constant all the time,” he said. “It feels like there’s never a point where you’re not connected to it, which is frustrating. There aren’t really places you can get away from it.”

To help establish a better balance, participants engaged in a “wheel of life” exercise, rating their current lives in such vital areas as career, finances, personal growth, health, family, relationships, social life, spirituality, attitude and recreation. If the completed wheels appeared out of balance, they were implored to reduce time on electronic devices until achieving their desired personal growth.

Adults agree they can serve as positive models for their kids

Due to the addictive nature of cell phones and the like, those gathered in Geneseo agreed that positive change will only come through hard work. They also acknowledged that they, as adults, can be just as vulnerable to electronic distractions as their children — and, therefore, they need to alter their own habits before they can expect their kids to change.

Along those lines, several participants voiced enthusiasm for scheduling similar discussions — in person, not online — in the future. One suggestion was to plan a weekend retreat at nearby Abbey of the Genesee, where the Cistercian monks’ emphasis on serenity, peace and Catholic spirituality might help people rediscover the beauty of silence.

Sauter observed that if adults take these kinds of steps to distance themselves from electronics in order to restore priorities in their lives, their children are more apt to do likewise.

“We all admire someone who’s trying to get better. If kids see parents working on it, it’s a great thing to model for them,” he said.

Tags: Livingston County News
Copyright © 2022 Catholic Courier, Inc. All rights reserved. Linking is encouraged, but republishing or redistributing, including by framing or similar means, without the publisher's prior written permission is prohibited.