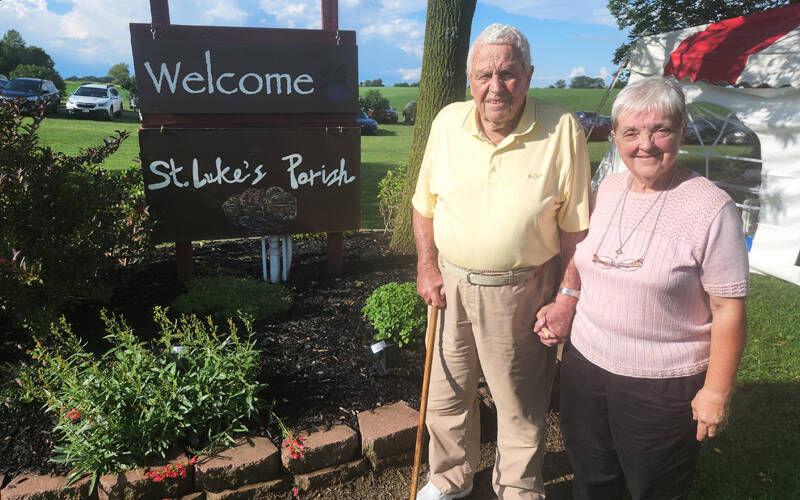 Arnold and Sharyon Dueppengiesser hosted an annual Mass and picnic Aug. 6 for their parish, St. Luke the Evangelist, at a shrine on their property. (Courier photo by Mike Latona)

PERRY — In a certain sense, the most welcomed guest on the Dueppengiesser property Aug. 6 was not a person but a large canopy tent.

Just as a scheduled 4 p.m. Mass was about to begin, a heavy cloudburst descended upon northeast Wyoming County. Not to worry: Thanks to the open-air tent, the nearly 100 worshipers in attendance were able to stay dry during the liturgy — even though rain pounded so hard on the canvas that the celebrant, Father Bernard Dan, could barely be heard at times despite his use of a microphone. But the skies cleared up near the end of Father Dan’s homily and remained that way the rest of the afternoon, allowing the ensuing potluck dinner to go off without a hitch.

All in all, it was another successful outing for what has become an annual event for St. Luke the Evangelist Parish at the scenic shrine that parishioners Arnold and Sharyon Dueppengiesser created near their home. The Aug. 6 liturgy took the place of the 4 p.m. Saturday Mass normally celebrated at St. Lucy Church in Retsof, nine miles to the northeast.

Shrine area features many spiritual symbols, such as a cross, statues and Stations of the Cross

Serving as an impressive backdrop for the day were numerous spiritual exhibits spread around the Dueppengiessers’ property. The first one to be erected, a large wooden cross, went up in 2000 after Sharyon Dueppengiesser received what she believes was instruction from God. That message, she recalled, occurred while attending Mass a year earlier at St. Mary Church in Geneseo — which, like St. Lucy, is a St. Luke the Evangelist worship site.

“I get goosebumps just telling the story,” she told the Catholic Courier.

Over the years, a series of additions — buoyed by physical labor from the Dueppengiessers’ large family and donations of display items from community members — has turned a previously undeveloped section of land into an immaculately landscaped shrine. Examples include a set of 14 bronze Stations of the Cross that were erected and dedicated in 2001; a statue of Mary that fronts a garden with 60 small bushes forming a replica of the rosary; statues of Jesus, St. Jude, St. Anthony and the Infant of Prague; a fully furnished cabin for visitors who wish to stay overnight; a pond near the shrine’s entrance area; a gazebo; several benches for reflection and meditation; and large rocks proclaiming such messages as “Tranquil Reflections” at the entrance and “Shalom” at the exit.

The shrine is situated near a dairy farm that the Dueppengiessers sold three years ago. As indicated by the yearly parish Mass and picnic, Arnold and Sharyon emphasize that the public is welcome on their property — located at 7825 Butler Road — anytime April through October with no advance notice necessary except for those wishing to stay at the cabin. The Dueppengiessers noted that non-Catholics as well as Catholics are regular visitors to the shrine, including a nearby Mennonite community. The facility also is open for picnics, graduation parties and other group events, with electricity being the only fee charged.

“This all come from God, so we feel like we shouldn’t charge people,” Sharyon said, noting that they do accept free-will offerings.

The Dueppengiessers’ efforts to provide spectacular spiritual offerings in a rural setting were acknowledged by Father Dan, parochial administrator of St. Luke the Evangelist Parish, near the conclusion of the Aug. 6 liturgy.

“We cannot overestimate the great gift the Dueppengiessers are to our parish,” he said.

“The Dueppengiessers have done so much to make (the shrine) a place of prayer and reflection, and they are so generous and hospitable. I know they have prayed that more people would come to enjoy it,” added Leslie Nieves, pastoral minister for St. Luke the Evangelist Parish.

On the other hand, Arnold and Sharyon say they’re not out for any personal credit; they’re simply extending God’s presence to as many people as possible.

“It’s all God’s blessing,” Arnold said during the Aug. 6 picnic. “We’re extremely grateful to almighty God for all these wonderful people who have come here over the years.”