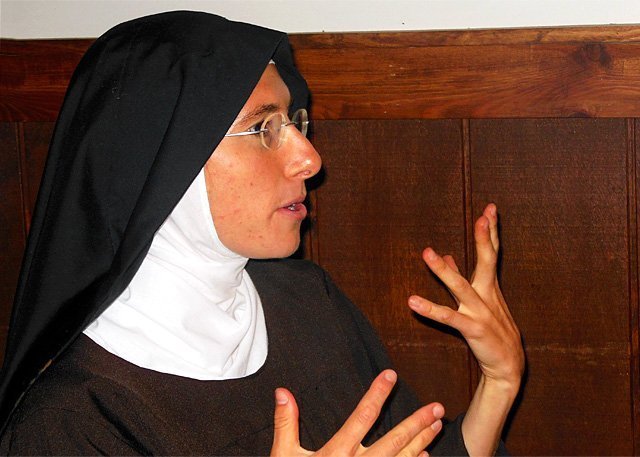 Ruthie Goins — now Sister Marie Veronica — speaks to young adults about vocations Aug. 16 in Fort Wayne, Ind. On Aug. 15, she had professed her perpetual vows as a nun in the Poor Sisters of St. Clare order.

Following graduation from Dansville High School, Ruthie Goins enrolled in college and had a boyfriend. However, she harbored a persistent sense that a different life might await.

"I realized I was most fully myself and most fruitful in my intimate prayer time," she remarked.

She visited a religious order out of state, began attending daily Mass and spent considerable time at nearby Abbey of the Genesee.

"From there, I quickly grew in my relationship with God, and Mary guided me to my vocation," she recalled.

That growth was marked by a significant milestone on Aug. 15 in Fort Wayne, Ind., when Ruthie — now Sister Marie Veronica — made her perpetual vows as a cloistered nun in the Poor Sisters of St. Clare order.

Her profession marked the pinnacle of a process that began 10 years ago, when the Livingston County native first committed to religious life.

"I have grown so much and am joyful in being a bride of Jesus and fruitful by my union with him," Sister Marie Veronica wrote to the Catholic Courier in an interview conducted by mail, due to her order’s restriction on telephone and computer access.

Sister Marie Veronica, 31, is from a family of six children. She grew up in the town of Ossian, just southwest of Dansville, where her parents, Marie and Keith Goins, still reside. She attended the former St. Mary School in Dansville and her family belonged to St. Mary Church.

A prolific distance runner, she graduated from Dansville High School in 2003 and enrolled at St. Bonaventure University on an athletic scholarship, later studying at SUNY Geneseo as well. Eventually she began attending St. Mary Church in Canaseraga, Allegany County, in the Diocese of Buffalo.

"She went to daily Mass and met a lot of older people. They still ask about her," said Marie Goins, who now belongs to the nearby Canaseraga parish but still attends weekday Masses in Dansville as well.

After considering different religious orders, Sister Marie Veronica settled on the Franciscan Sisters Minor. She became a postulant in 2006 and a novice in May 2007, at which time she received her religious name. She took her first vows in 2008.

During these years, Sister Marie Veronica resided in Bellingham, Mass., and adapted smoothly to the Franciscan sisters’ practices of door-to-door evangelizing and children’s catechesis.

"She was very outgoing," her mother said.

In 2010 the sisters relocated to Indiana. Two years after that, they opted to form a new order after several months of discernment and became cloistered in the process, taking the new name Poor Sisters of St. Clare so as to more deeply emulate St. Clare, who in the 13th century was the first female follower of St. Francis of Assisi.

Sister Marie Veronica said the sisters’ initial reaction to the transition was mixed, but it was a move she came to embrace.

"Through the four years of living as a Poor Clare, my discernment has deepened and matured so that I can profess to God and his church, without fear, to live all the days of my life as an enclosed Poor Clare nun," she wrote.

Sister Marie Veronica is one of nine sisters residing in Our Lady of the Angels Monastery in Fort Wayne Chief in their extensive prayer lives are Liturgy of the Hours, which they pray several times daily beginning at 2 a.m. Sister Marie Veronica added that she currently serves as the community’s sacristan, vocations director and gardener. She also enjoys embroidery and still continues to run regularly on the fenced-in monastery grounds.

"Often I pray a rosary as I run. It is good for body and soul; running has been a beautiful part of my life," she remarked.

Along with phone and computer usage being prohibited, the sisters cannot leave the monastery except in special circumstances such as doctor appointments. Guests are allowed to visit and can meet face-to-face with the cloistered nuns, although they are separated at all times by bars.

Visitors for Sister Marie Veronica were numerous on Aug. 15, when family members and friends journeyed to Indiana to witness her profession of perpetual vows. She maintains ties with many people back home; invitations to her profession of vows have appeared in recent months in the bulletins of St. Mary in Canaseraga and Holy Family Catholic Community, of which St. Mary, Dansville, is a part.

"So many of my dearest ones are back home in the Rochester Diocese," she wrote. "My heart and root are deeply forever in western New York soil."

Though grateful for her past, Sister Marie Veronica is fully embracing her present and future life as a fully professed Poor Sister of St. Clare.

"I am so eager because it is so right," she stated.