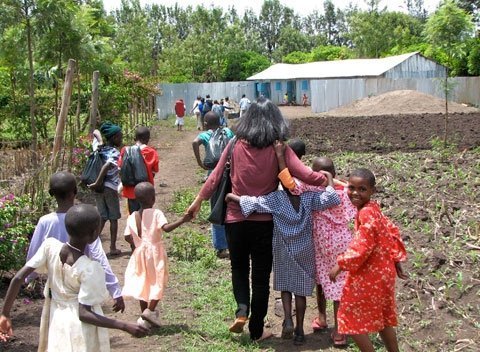 An concert to be held Sunday, Oct. 21, in Livingston County will benefit orphans in Kenya.

The YellowJackets, a nationally known men’s a cappella group from the University of Rochester, will perform at the Livonia High School auditorium, 2 Bulldog Blvd., Livonia, beginning at 3 p.m. The concert, "Give Me Shelter," is serving as a fundraiser for the Joy Rescue Centre, an orphanage in Kenya.

Formed in the 1950s as part of their college’s former Glee Club, the YellowJackets have gone on to record several albums and perform numerous concerts locally and nationally, including an appearance last year in the reality television show "The Sing-Off." The YellowJackets also are involved in Kenyan charitable works, having made a trip to the African country in May 2011.

Tickets for the Oct. 21 concert are $20 for adults and $10 for students, and will be available at the door. To order advance tickets and/or make a tax-deductible donation (checks should be made payable to Friends of Kenyan Missions), contact Joe DiMino, 4564 Reservoir Road, Geneseo, NY 14454. For further details, contact DiMino at 585-245-8275 or jdimino@ rochester.rr.com.

DiMino, the concert organizer, has made five trips to Kenya — with a sixth planned for November — since stepping down as executive director of Catholic Charities of Livingston County in 2010. His missionary work began with St Michael’s Rescue Centre, a home for street boys that is a ministry of the Diocese of Muranga.

Since last year DiMino has been involved with the Joy Rescue Centre, a private orphanage in the Mwea region of central Kenya, an area with a high rate of HIV/AIDS. According to DiMino, many of the orphanage’s children have lost their parents to AIDS and several are HIV-positive themselves.

Last year the financially strapped Joy Rescue Centre was forced to move from the compound it had rented since its founding in 2006. The center relocated to a temporary plot of land featuring buildings with dirt floors, tin walls, no windows and no washrooms for children between the ages of 1 and 17 served by the facility.

"The 50 kids that reside there live in conditions I never imagined ever seeing in person. Since it is the only way of life they know, the kids have become accustomed to playing and eating in mud, using a pit toilet, sleeping in bedrooms with dirt floors and no windows, and contracting malaria and pneumonia frequently," said DiMino, who attends both St Matthew and St. Luke parishes in Livingston County.

DiMino has assisted the orphanage staff on computer, business and fundraising skills, in an effort to avert the same kind of fiscal crisis that forced its recent move. Joy Rescue Centre operates completely on donations. All proceeds from the concert in Livonia will help build a permanent masonry structure with concrete floors and windows. This structure will include dormitories, a dining hall, kitchen, flush toilets and showers.

Despite their many hardships, DiMino described working with the orphanage’s youths, and the staff that cares for them, as "an amazing experience — lots of laughs, a few tears and great satisfaction watching children grow in mind, body and spirit. It’s awesome to see them smile."