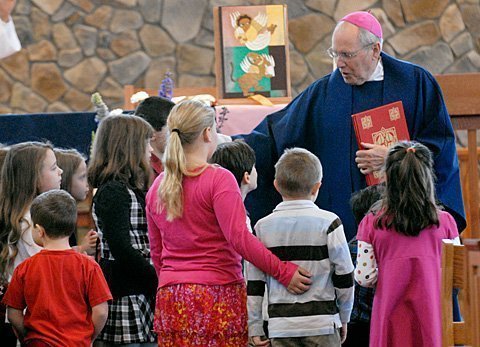 Bishop Emeritus Matthew H. Clark blesses the children of the St. Mary and St. Matthew parish community before they head to children’s liturgy at St. Matthew Church in Livonia Dec. 9.

LIVONIA — Scores of children were surely delighted when "St. Nicholas" popped into St. Matthew Church toward the end of Sunday Mass. The greatest thrill, however, was reserved for one big kid — none other than Bishop Emeritus Matthew H. Clark.

St. Nicholas annually visits the church around the time of his feast day, Dec. 6, to fill youngsters’ shoes with chocolate coins in keeping with popular tradition. This year St. Nick did his gift-giving at the 10:30 a.m. liturgy on Dec. 9, with one significant addition.

The bearded man in a bright red suit approached Bishop Clark, the guest celebrant, lugging his big sack. Inside was a large, colorful quilt — a handmade gift from the parishes of St. Matthew and St. Mary in Honeoye — to honor Bishop Clark’s 50th anniversary as a priest, which will take place Dec. 19. The large congregation erupted into prolonged applause as the quilt, accompanied by two pillows with a similar design, was presented. Upon eyeing the comfortable material Bishop Clark quipped, "Somebody in the parish must have learned I have a PhD in taking naps."

Bishop Clark’s appearance was extra-special since St. Matthew is the only diocesan church that shares his first name. The parish has existed under that title since 2004, when two former parishes — St. Joseph in Livonia and St. William in Conesus — were combined and the new church opened at 6591 Richmond Mills Road (Route 20A) in eastern Livingston County.

Bishop Clark had originally been scheduled to visit there for the Feast of St. Matthew on Sept. 21, but was forced to postpone due to his major public announcement earlier that day that his retirement had officially begun. On the other hand, the scheduling delay gave parishioners time to conceive and construct their special gift for him. According to Alice Miller Nation, pastoral associate, approximately 25 volunteers banded together over a period of perhaps a month — "breakneck speed for a quilt," she observed.

"It was a good old-fashioned quilting bee," Miller Nation added, noting that the pillows were formed out of scraps from the quilting material. She said the project — using a pattern known as log cabin and a design called barn raising — was completed in time to be displayed at Masses the previous two weekends at both St. Matthew and St. Mary, where parishioners were encouraged to touch the material and say prayers for the bishop over it.

In addition to expressing gratefulness for the quilt, Bishop Clark lauded the St. Matthew community for its vibrant liturgy on Dec. 9 as well as its emphasis on children: "Today I couldn’t help but notice your special care for the little ones," he said, noting the children’s choir that performed before Mass and the group of youngsters who came forward to receive his blessing en route to Children’s Liturgy of the Word.

The bishop also reflected his love for children by shaking hands and chatting with numerous young people who approached him after Mass. As for one bashful little girl who looked down at the ground rather than up at him, Bishop Clark responded by leaning over and kissing her on the head.

During his homily, Bishop Clark furthered his focus on young ones by likening the season of Advent, with its emphasis on hope and anticipation, to our children who represent signs of life and hope. Yet he also stressed that Advent is a vital season for people of every age, saying we all should be mindful of what God still has in store for our lives: "What God has begun in us, God will one day bring to completion," he stated.

In addition to eyeing the future, Bishop Clark implored congregants to reflect on their past by being "mindful of the way you have experienced God’s faithful love to you through the years." As an example, Bishop Clark cited a 50-year reunion he had attended just a few days earlier in Tampa, Fla., where he met up with 21 of his seminarian classmates from Rome. He admitted to having been initially wary of attending, but ended up pleasantly surprised.

"When I walked in, I thought, ‘Thank God I came to this,’ because in every case it seemed like a conversation that had just been interrupted for a few minutes," he said. "The trust and friendship that had survived for so long really helps me understand that God has been faithful. My Advent was enriched triply, quadruply and beyond."