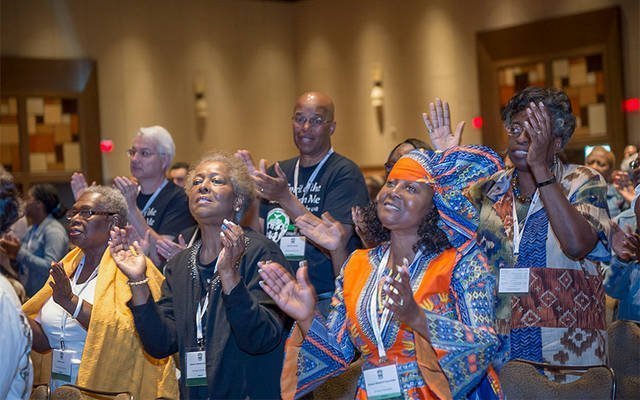 Members of a local delegation to the National Black Catholic Congress XII were so moved by a production they saw during the congress that they plan to bring it to local audiences this spring.

“Tolton: From Slave to Priest” is a live, one-man drama that tells the story of Father Augustus Tolton, the first U.S. black priest and the first African-American candidate for sainthood, explained Lynette Saenz, director of the Diocese of Rochester’s Cultural Diversity Office. The play will be presented at Aquinas Institute in Rochester May 21. It was created by Saint Luke Productions, a Catholic theater ministry dedicated to evangelization through professional live and media productions, according to information at stlukeproductions.com.

“We thought that it would be fantastic for our community,” said Francisco Thorne, a member of the diocesan Black Catholic Commission who attended the NBCC for the first time last summer with his wife, Yvonne. The congress, which is presented every five years, took place July 6-9 in Orlando, Fla.

“Through the grace of God, (we’re) ‚Ä¶ making it happen,” Thorne remarked of the production, which will be presented as a collaboration between the Rochester and Buffalo dioceses.

Father Tolton overcame many struggles to become a priest, Thorne said, noting that his story illustrates that a person’s humble beginnings do not dictate the course of his future. The story will be a great way to share the black Catholic experience with the entire community, he said.

“It’s an inspiring story,” remarked Thorne, a parishioner of St. Marianne Cope Parish in Henrietta. “I’m happy the diocese has embraced it, and Aquinas has embraced it, too. It’s a great learning experience and part of American history. On several levels, it is a very educational, good thing to happen.”

In addition to their work on producing the play, the group of 11 NBCC participants met in February to review reflections on the Pastoral Plan of Action that was developed at the congress and to adapt it for the Rochester Diocese, Saenz said.

Thorne said the local commission will focus on three strategies from the national plan: spirituality and the saints, social justice, and catechesis and evangelization.

Other strategies in the national plan included leadership, vocations and youth ministry, according to information at http://bit.ly/2GC9RWH. Thorne said the diocese already handles these areas well.

Regarding evangelization, the commission will try to reach out to African-American Catholics who may have fallen away from the church or others who don’t know about the Catholic faith, he said. Members also will develop and promote a comprehensive, Afro-centric faith-formation program and raise awareness throughout the diocese about the six African-American candidates for sainthood.

The commission’s social-justice efforts will focus on increasing participation in prison ministry; reaching out and providing support to victims of domestic violence; increasing awareness of and working to eliminate human trafficking; and eradicating racism.

Racism was discussed in depth during the congress, including the subtle forms it can take, Thorne said. In Rochester, for example, both black and white people often are surprised to learn that he is Catholic, he said.

“Everybody needs to learn,” Thorne said. “Certain parts of this diocese still need to know there are lots of different ethnic groups that are Catholic too.”

David Powe, another member of the commission, said participation in the congress helped to provide a renewed sense of leadership that is needed for local black Catholics to build up the community. Next, they need to engage more youths to create new leaders and potentially engage more African-American families in the faith, he said.

“Building through youth is the key to us succeeding,” Powe said.