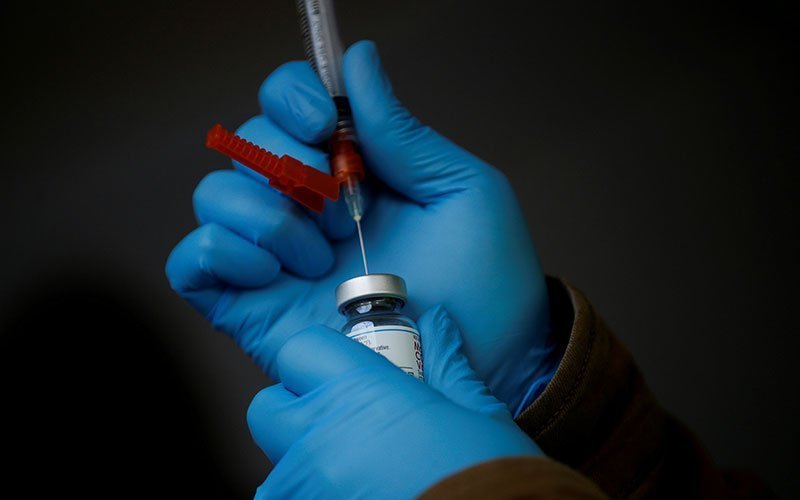 A health care worker in Sequim, Wash., draws a dose of the Moderna COVID-19 vaccine from a vial in this illustration photo. (CNS photo by Lindsey Wasson/Reuters)

Relief was the first thing Alex DeLucenay felt after receiving his first dose of a COVID-19 vaccine.

“I felt like we’re finally digging out from this terrible, terrible hole,” he said.

Later that day, DeLucenay experienced some aches and chills, which he’d anticipated, but they were gone the next day.

The shot “wasn’t comfortable, but sure beats getting actually sick with COVID or giving it to someone,” said DeLuceney, who received his second dose of the vaccine Jan. 25.

DeLucenay, who is a pharmacist, said he had no reservations about receiving the vaccine, and that his decision to receive it was informed both by his professional experience and his Catholic faith, which calls adherents to uphold the consistent life ethic, maintaining that all human life is sacred from conception to natural death. Receiving the vaccine, DeLucenay said, is one way for him to live out the consistent ethic of life in his own life.

“I know that something I can do will undoubtedly keep people healthier and most likely alive,” said DeLucenay, who currently is in formation for the permanent diaconate for the Diocese of Rochester.

Pope Francis said Catholics should consider being vaccinated against COVID-19 because doing so not only protects their health but also the health of those around them. The Holy Father and Pope Emeritus Benedict XVI both received their first doses of a COVID-19 vaccine in mid-January. And in late December, the Vatican’s Congregation for the Doctrine of the Faith issued a statement saying it is morally acceptable for Catholics to be vaccinated against COVID-19.

This Vatican document came at a time when many local Catholics were questioning whether they should be vaccinated and how COVID-19 vaccines may be linked to abortions that took place long ago, observed Shannon Kilbridge, director of the Diocese of Rochester’s life-issues office. Many of these questions are addressed on the diocesan website devoted to life issues, LifeRoc.org.

The link between vaccines and abortion lies in decades-old cell lines originally taken from aborted babies, according to Dr. Thomas Carroll, president of the Finger Lakes Guild of the Catholic Medical Association and a doctor of internal medicine and palliative care. To understand this connection, it’s important to know that cells will continue to divide after being taken from a body so long as they are maintained in a culture medium to keep them alive, explained Carroll, who is on the faculty at the University of Rochester.

An initial cell and the cells into which it divides are known as a cell line. Most cells will only divide a certain number of times before they die, but certain cells will divide indefinitely under the right conditions, he added. Some such cells were taken from the bodies of aborted babies more than 50 years ago and have been dividing ever since, Carroll said, noting that these cell lines have been used in the development of various drugs and vaccines.

“They use cell lines because you can use them to test some sort of drug that you have before you start putting it into people or even animals,” he explained. “You want those cells to be as close as possible to human cells you will ultimately use this treatment with, so you are getting valid results.”

The Catholic Church considers cell lines that originated with aborted babies to be morally compromised. The church maintains that no more such lines should be created and that pharmaceutical companies should stop using those that already exist. If comparable alternatives with no connection to abortion are available, Catholics should avoid using vaccines made using these cell lines, according to a January 2021 document from the U.S. Conference of Catholic Bishops. However, both the Vatican and the USCCB state that serious health risks may justify the use of vaccines created using cell lines tied to abortion if no alternatives are available.

“The Church magisterium has clearly and repeatedly stated that under certain circumstances it is ethical for Catholics to receive such a vaccine, in spite of it being morally problematic,” the Finger Lakes Guild said in a December 2020 statement. “Further, Catholic teaching indicates that not only is it permissible, but it may be advisable to receive morally problematic vaccines, for example, when there is a grave risk to one’s own health and/or the health of the larger population, and when alternatives are not available.”

Some of the COVID-19 vaccines currently available or in production are more morally problematic than others, Kilbridge said. The Pfizer and Moderna vaccines currently available in this region did use morally compromised cell lines, but only in the testing phases, Carroll said. These two vaccines are less morally problematic than vaccines developed by AstraZeneca and Johnson &Johnson, both of which used morally compromised cell lines in the development and production phases as well as the testing phase, he said. Neither the AstraZeneca nor Johnson &Johnson vaccines are being administered locally at this time.

“There is not a moral issue when you do not have a choice in the kind of vaccine being given,” Kilbridge said, noting that Catholics are called to advocate for the development of vaccines developed without the use of morally compromised cell lines “so that we do have that choice moving forward.”

The Catholic Church neither forbids nor requires the use of ethically problematic vaccines, but “instead urges people to discern what decision to make after having carefully formed their consciences about the moral and prudential issues surrounding vaccines that become available,” said a December 2020 statement from the Vatican’s Congregation for the Doctrine of the Faith.

DeLucenay said he has heard many other reasons why people might be hesitant to be vaccinated against COVID-19. Yet most such reasons are the result of half-truths or misconceptions, said DeLucenay, a member of the Finger Lakes COVID-19 Vaccination Task Force, which comprises medical professionals and community stakeholders.

“People are scared, and when you have a fearful group of people, a half-truth can easily spread like wildfire. Our goal is to provide education on the vaccine and try to dispel myths and try to ensure adequate access,” said DeLucenay, who is an associate professor in St. John Fisher College’s School of Pharmacy and practices in a Rochester General Hospital outpatient clinic.

Some misconceptions can be dispelled easily by explaining how the COVID-19 vaccines work, DeLucenay and Carroll both observed. The goal of these and other antiviral vaccines is to prompt the body to mount an immune response to a particular virus, they said.

“Your body recognizes that this is not supposed to be here and decides, ‘I’m going to attack it.’ It creates memory cells. … As soon as the memory cell sees (that virus) again, it attacks right away, before the virus gets a chance to replicate,” DeLucenay explained. Although the immune system of an unvaccinated person also will attack the virus, he noted that it takes longer for an unvaccinated person’s body to recognize that it needs to start its attack.

The currently available COVID-19 vaccines from Pfizer and Moderna elicit this immune response without introducing particles of the virus into the body, Carroll said. Other common vaccines, such as the influenza vaccine, contain killed particles of the viruses they protect against. Neither the COVID-19 vaccines nor the influenza vaccines contain live viral particles, however, so there is no risk of contracting the viruses from these vaccines, he said.

Instead of viral particles, COVID-19 vaccines use mRNA — or messenger RNA — to instruct the body to make “spike proteins” that trigger an immune response, DeLucenay said. Once the mRNA delivers its message it breaks down, Carroll noted.

“It breaks down super easy, which is why you have to keep these things frozen,” said Carroll, who added that some people mistakenly believe “that the mRNA will get integrated into your DNA and change your DNA for life. That is categorically untrue. The mRNA is a one-way signal.”

Since the COVID-19 vaccines don’t contain viral particles, “there’s nothing that we could imagine being a long-term side effect from it,” DeLucenay said.

Such short-term side effects as fever, chills, headaches or muscle aches are signs that the body is mounting the immune response and the vaccine is working, he added.

A few people have had severe allergic reactions known as anaphylaxis after receiving the vaccine, Carroll said, but this can happen with any vaccine. People who have had severe allergic reactions to any ingredient in the two COVID-19 vaccines currently available in this region should not get those vaccines, according to the Centers for Disease Control and Prevention.

“Our experience clinically thus far would suggest that those shorter-term things are not a bigger concern in this vaccine than in any other vaccines,” Carroll said.

DeLucenay noted that some people also have been hesitant to receive the vaccine because it was developed and made available quickly. But he said the vaccines for COVID-19 had to go through the same rigorous study protocols as any other vaccines.

“Really, it’s the red tape that has been cut, and there have been a whole lot more resources dedicated to it, which speeds it up,” DeLucenay said.