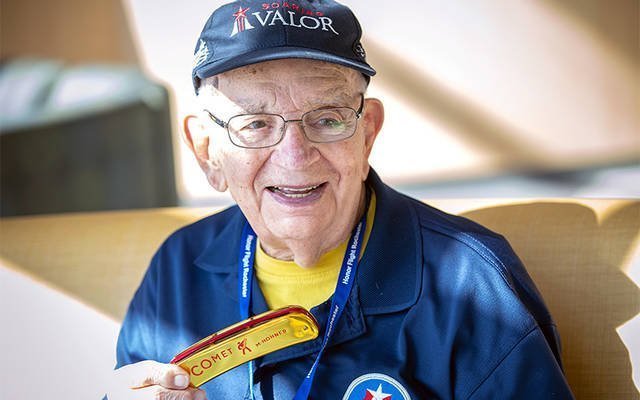 ”Harmonica Pete” DuPré performed for fellow World War II veterans at the Rochester International Airport as they prepared to depart on a trip to the National World War II Museum in New Orleans Oct. 9. (Courier photo by Jeff Witherow)

ROCHESTER — The strains of harmonica music floated through Concourse A at the Greater Rochester International Airport Oct. 9. Dozens of World War II veterans sat in folding chairs in front of Gate A9 and clapped along as fellow veteran Peter DuPré serenaded them with a rousing rendition of “When the Saints Go Marching In” before they boarded a plane bound for New Orleans, where they would tour the National WWII Museum with their caregivers and a group of local high-school students.

DuPré has been a familiar presence at such veterans’ events for the past few years, and last spring his popularity skyrocketed after ESPN posted to Twitter a video of him playing the national anthem at the U.S. National Women’s Soccer Team’s game against Mexico. The video went viral, has been viewed more than 3.5 million times and has led to an increased demand for 96-year-old DuPré to perform at high-profile public events. Just a few short weeks before his performance at the airport, he played the national anthem in front of 67,000 football fans at the Sept. 22 Minnesota Vikings home game.

“That was the biggest crowd I ever had,” DuPré told the Catholic Courier. “It’s fascinating. ‚Ä¶ There’s a beautiful marriage between the harmonica and the PA systems of large gatherings like that, and once the sound starts to settle in on the people, it’s like somebody turned down a major volume control because people stop talking and they listen, and all of the sudden the only sound that you hear in there is that harmonica making music. The sound just kind of rolls around, nobody else is talking, and that’s the greatest feeling in the world.”

DuPré, who is known to many as “Harmonica Pete,” has been playing the harmonica ever since he was in elementary school. At that time the nation was in the midst of the Great Depression, and DuPré’s family had recently relocated to a suburb of Pittsburgh. Families couldn’t afford to buy most musical instruments, so schools had harmonica bands instead of traditional bands, he recalled.

“I said to my dad, ‘Boy, that would be a good way for me to learn who we’re living with around here. He scared up 50 cents, which in 1933 was a lot, and he bought me a harmonica,” DuPré said. “I used to just sit and learn how to play that harmonica. I not only got to know the kids, but I got to know the harmonica, and that was the start of what has been a lifetime (of playing) for me.”

Within the last year DuPré has played his harmonica at sporting events and veterans’ events both locally and throughout the nation, and he’s also participated in World War II remembrance events abroad in Normandy and Paris. He also regularly plays the harmonica at Masses and during funerals at his parish, Church of the Assumption in Fairport.

DuPré attributes his strong Catholic faith to the way his parents raised him. They taught him to believe in God and “how to count, how to amount to something,” he said. Both World War I veterans, his parents also instilled in DuPré a desire to serve his country. His mother had served as a nurse, and DuPré followed in her footsteps by becoming a medic in the U.S. Army.

He served in Europe during World War II, and when he wasn’t tending to the wounded, he was an altar server at Masses celebrated by the Catholic chaplain in his unit. The chaplain regularly celebrated Masses for the German prisoners of war being held nearby, and DuPré held the paten while any prisoners who were Catholic received Communion.

“The thing that struck me, hit my like a baseball bat, was they look exactly like me. They were the same age, essentially,” DuPré recalled. “They were just plain folks, like me.”

After the war was over, DuPré returned home to his wife, Jane. The couple had five children and raised them in the Rochester area, where DuPré was a Prudential insurance salesman for many years.

The DuPré had been married for 70 years when Jane passed away in 2014, and DuPré believes his late wife is still caring for him, albeit now from heaven. On the day DuPré performed for the veterans in the airport, an accidental double-booking in his schedule ended up working out to the benefit of all those involved, and DuPré believes such occurrences are not coincidences.

“When I go to bed tonight, I’ll just look up at my wife and say, ‘Nice job,’” he remarked.

DuPré said he keeps his harmonica in his pocket and is ready to play at all times, whether his performance is in the privacy of his own home “when I get bored with my own conversation” or in front of a crowd of thousands.

“Thank God the calls keep coming in, people wanting me to do this, that or the other,” DuPré said. “I’m ready, willing and able, all three, and I enjoy it.”