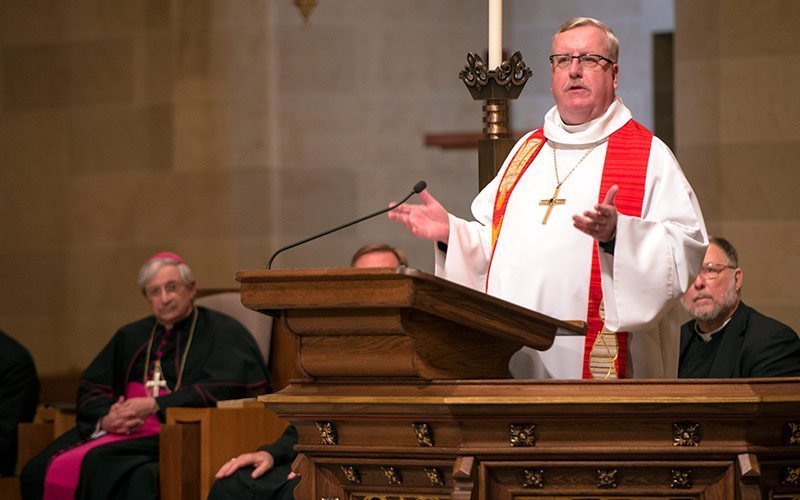 ROCHESTER — Commonality rather than conflict was the prevailing theme among Catholics and Lutherans who came together for a special worship service at Sacred Heart Cathedral Oct. 29.

The Sunday-evening gathering marked the 500th anniversary of the Protestant Reformation while also highlighting ongoing efforts to build cooperation, understanding and mutual respect between Catholics and Lutherans.

“How wonderful it is to be here with each other,” stated Bishop Salvatore R. Matano in his opening remarks for the service, at which he copresided with Bishop John Macholz of the Upstate New York Synod of the Evangelical Lutheran Church in America (ELCA). Bishop Matano added that the joining of Catholics and Lutherans on Oct. 29 demonstrated the desire “that we all may be one.”

Serving as assistant ministers for the service were Father Scott Caton, parochial vicar at Greece’s St. Lawrence Church, and the Rev. Dan Hoffman, a Lutheran pastor from Buffalo, who together facilitated a four-part series of panel discussions between Catholics and Lutherans earlier in 2017.

The service at Sacred Heart Cathedral coincided with the 500th anniversary of Martin Luther’s first public posting of his “95 Theses” on Oct. 31, 1517. Luther’s disagreements with Catholic Church teachings ignited a schism that spread through 16th-century Europe, resulting in the rise of Protestantism. However, dialogue between Catholics and Lutherans has increased considerably since the 1960s, when the Second Vatican Council stressed greater ecumenical efforts by the Catholic Church.

Father Caton noted five ecumenical imperatives during the Oct. 29 event. He said Catholics and Lutherans should always: start from a point of unity, rather than division; be open to being transformed by each other; commit themselves toward visible unity; jointly rediscover the power of the Gospel of Jesus Christ; and witness together to the mercy of God in word and service.

Positive steps also were highlighted during the panel discussions that took place between April and September, two of them at Sacred Heart Cathedral and the others at Rochester’s Lutheran Church of the Incarnate Word. Attendance averaged approximately 25 per meeting, according to Betsy McDermott, the Diocese of Rochester’s project manager for ecumenical and interreligious affairs.

Dialogue during the talks was based on “From Conflict to Communion: Lutheran-Catholic Common Commemoration of the Reformation in 2017,” a document created by the Pontifical Council for Promoting Christian Unity and the Lutheran World Federation. Participants in panel discussions sought to establish common ground in such areas as social justice, ministry, Bible study and worship.

While acknowledging longstanding divisions between Catholics and Lutherans, Bernard Grizard, diocesan director of Pastoral Services, noted there also is “so much that we have in common.” Grizard added that the discussion series “kind of reinforced that we were on the right track, truly looking for a sense of unity.”

McDermott said the discussions evolved from being educational in nature to considering “what can we do together going forward.”

Meanwhile, the Rev. Frank Hanrahan, dean of the Lutherans’ Genesee Finger Lakes Conference, said he would like to see cooperative efforts between local Catholics and Lutherans extend beyond this 500th-anniversary year. Among the possibilities, he said, are further prayer and dialogue as well as joint community-service projects.

“As we find things we have in common, let’s keep going. I think there’s a sense of mission and ministry that calls all of us,” the Rev. Hanrahan said. “Our hope is that the people will decide our next step going forward, and we will provide leadership for that to happen.”