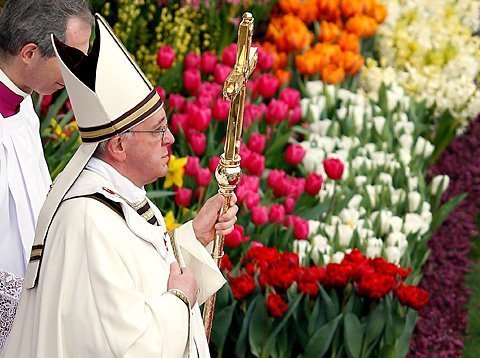 Finger Lakes Catholics — especially those whose parishes share a name with the new pontiff — feel a strongconnection to Pope Francis, parish leaders noted.

When Argentinian Cardinal Jorge Mario Bergoglio was elected pope on March 13, many people around the world were impressed by the new pope’s choice of St. Francis of Assisi as his namesake.

His choice resonated with many Catholics in the Finger Lakes region as well, especially those who feel some connection to St. Francis of Assisi.

"It’s been a journey to go from the two to one, as it is with any parish," Father Fennessy remarked.

Many parishioners were surprised when St. Francis and St. Clare was chosen as the parish’s new name, he said, because that hadn’t been included on a list of suggested names the parishes had previously sent to the diocese. Although it came as a surprise to parishioners, the name choice was an appropriate one, he added.

"St. Francis and St. Clare were very much working for the poor, and I think that’s probably our greatest mission here. Before the two parishes even came together as a cluster the social-ministry people worked together, and they continued to work together on various projects," Father Fennessy said.

"Then you look at Pope Francis and his whole way of looking at the poor, and it clicked. It was good. People like it," Father Fennessy said.

The fact that the new parish and the new pope share a name also seems to have helped St. Francis and St. Clare parishioners from both churches come together and take ownership of their new name, he continued.

"I did hear a parishioner say, ‘We’ve got the new Pope Francis. He’s named after our parish.’ The word ‘our’ parish, that just warmed my heart," he recalled.

The scenario that’s been playing out in Waterloo and Seneca Falls is the reverse of a situation in Auburn, where St. Francis of Assisi Parish recently merged with St. Hyacinth Parish to form the new Ss. Mary and Martha Parish. Parishioners from St. Francis of Assisi seem to feel an especially strong affinity for Pope Francis, but they’re not the only ones who are impressed by the new pope, noted Deacon Gary DiLallo, parochial administrator at Ss. Mary and Martha. Parishioners like the fact that Pope Francis is a humble, quiet, prayerful and holy man who lives a simple lifestyle like St. Francis, he said.

"For me personally, St. Francis has always been one of my favorites for two reasons: his love of God’s creation and the fact that he was a deacon," Deacon DiLallo added. "Pope Francis seems to embody the same quiet, gentle spirit as his namesake, St. Francis."

A local restaurant owner who has worshipped at St. Francis of Assisi Church for years has an extra and personal reason to appreciate the new pope, Deacon DiLallo commented.

"Two days after Cardinal Bergoglio was elected pope and took the name Francis, … Francis "Duffy" Mastropietro excitedly said to me, ‘He took my name, this is good for our church, too!’" he recalled.

Fellow parishioner Paolo Saltarello may not share a name with the pontiff, but that doesn’t mean he’s any less excited about Pope Francis. Saltarello has been attending St. Francis of Assisi Church since he came to the United States from Italy in 1964, and he said he’s always had a strong devotion to the saint.

"I have statues and I pray to him in my home. I have gone to Assisi many times. You go there and it’s just so serene. It’s unbelievable when you are there in the church where St. Francis was buried," Saltarello said.

He said he’s impressed by the new pope’s humble nature and the way he’s been going about things, and he believes it was the right time for the election of such a leader.

"Our present pope, certainly he is just loved by the people. I believe that he will bring back many people who have somewhat distanced themselves from the Roman Catholic Church," Saltarello said.