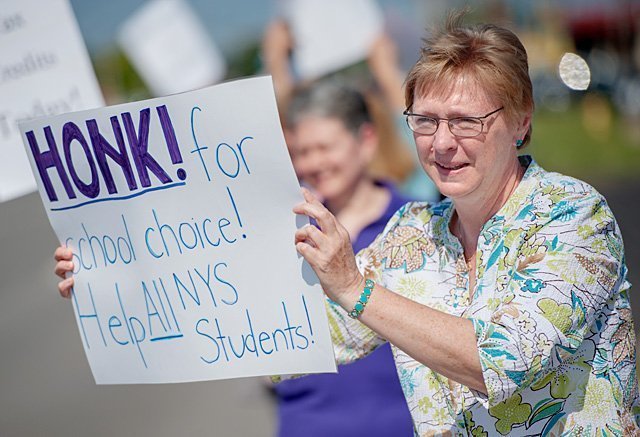 Debbie Eveland, a fifth-grade teacher at St. Kateri School in Irondequoit, takes part in a May 28 rally outside the Irondequoit office of New York State Assemblyman Joseph P. Morelle. Many Catholic educators turned out to voice their support for the Parental Choice in Education Act and urge Assemblyman Morelle to support it.

The superintendent of the Diocese of Rochester’s Catholic schools is asking concerned Catholics to contact their state legislators and show their support for the Parental Choice in Education Act , which Gov. Andrew Cuomo introduced at a May 12 rally on Long Island.

The proposed legislation would provide $150 million in education tax credits intended to support and protect alternative school options for parents and students throughout the state, and this would aid both diocesan Catholic schools as well as the families who pay tuition in order to send their children to these schools, according to Superintendent Anthony S. Cook III.

Dozens turn out for rally

"It’s a pretty comprehensive piece of legislation. It certainly would be helpful to our families. If people are in support of it, they need to contact their local legislators," Cook said, noting that Bishop Salvatore R. Matano already has sent his own letters to local legislators.

The Parental Choice in Education Act would provide:

* Tax credits to low-income families who send their children to nonpublic schools. This Family Choice Education Credit accounts for $70 million of the act’s $150 million in credits. Families who earn less than $60,000 per year would qualify for credits of up to $500 per student for tuition expenses associated with sending their children to nonpublic or out-of-district public schools. The governor estimates theses credits would benefit approximately 140,000 children in 82,000 families across the state.

* Scholarships to low- and middle-income students to attend either nonpublic schools or public schools outside their local districts. This tax credit totaling $50 million would be available to individuals and businesses who made donations to not-for-profit organizations that award scholarships to students in prekindergarten through 12th grade. These donors would be eligible for a tax credit for up to 75 percent of their donations. The not-for-profit organizations, meanwhile, would award $67 million in scholarships to private and out-of-district public schools based on the financial need of the students’ families.

* Tax credits to public-school teachers for the purchase of supplies. This $10 million component of the Parental Choice in Education Act would provide a tax credit of up to $200 per public-school educator to support the purchase of instructional materials and supplies used in their classrooms. It would be administered on a first-come, first-served basis.

"Education is the greatest gift that a parent can give to their children — and it is also one of the most personal decisions that a parent can make. That’s why we need to support parental choice in education," Cuomo explained during the May 12 rally. "If you speak up, this will pass. We need you to go first."

The state Catholic conference’s Catholic Action Network has drafted a message of support for the bill, which Catholics may edit and e-mail to their local representatives from the conference’s website, www.nyscatholic.org. The conference also is urging people to call their legislators as well, and to do so as soon as possible, since the current legislative session will end June 17.

Bishop Matano sent letters expressing his gratitude and appreciation to the 12 local lawmakers who support the legislation, as well as letters of appeal to Assemblymen Harry Bronson and Joseph Morelle, who are the only two area lawmakers who currently do not support the bill, Cook said.

Roughly 15 percent of all students in New York state are enrolled in nonpublic schools, according to information provided by the governor’s office. These nonpublic schools provide an important educational alternative, especially in communities around the state’s 178 failing public schools, yet many parochial schools in New York are experiencing financial hardship and 75 have closed in the last five years, said Cuomo, who is a product of Catholic education. While these nonpublic schools provide important alternatives for families, they are not the right choice for every family, added Cuomo, who sent his three daughters to a public elementary school.

"There is no right or wrong choice. That’s not what we’re saying. … But, to have a choice means you need to have options. If you had no options, then you have no choice," he said.

This issue of parental choice in education is not just a Catholic issue, noted Cardinal Timothy M. Dolan, who joined Cuomo at the May 12 rally.

"It is an issue for every parochial, private or nonpublic school that is devoted to the success of their students," Cardinal Dolan said. "Our students are our greatest treasure and the Parental Choice in Education Act is all about supporting them no matter where they go to school."